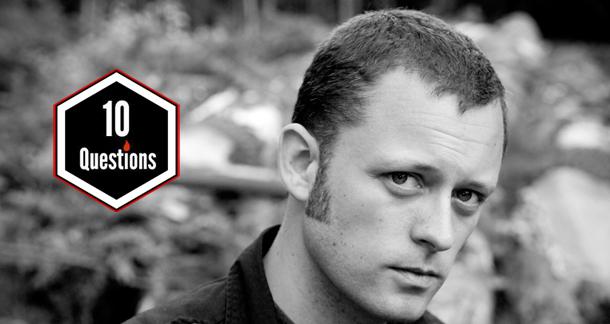 Photo by Jennifer May

Benjamin Percy has one of those careers that most writers dream about. Cherry non-fiction assignments with Esquire, Time, GQ, The WSJ, etc.; two critically acclaimed short story collections (The Language of Elk and Refresh, Refresh.); two high profile novels (The Wilding and Red Moon.); and more nationally recognized honors and prizes then you can shake a stick at. I’m fairly certain ten or twenty years from now there’s going to be a lot of readers who are going to be saying that they thought Percy did his best work during his “cocaine” years (ala every Stephen King fan, ever).

I know this sounds a little presumptuous on my part, but if you’ve had the chance to read Percy’s first novel, The Wilding, or you’ve gotten your hands on an advanced copy of Percy’s latest, the werewolf/war epic, Red Moon, chances are you’re nodding along in agreement with me. Percy writes dense page turners that not only appeal to fans of commercial fiction, but offer enough emotional/intellectual gut punches and sharply written, poetic prose to satisfy even the most jaded of the literati. Simply put, Red Moon may very well be the literary event of 2013.

This was for Mrs. O’Shea’s class, sophomore year of high school. At the time, I was reading my way through a fantasy novel a week. Dragonlance, Forgotten Realms, The Wheel of Time series. Lots of Conan, too. I was drawn pathetically to their covers, which usually featured the musclebound Cimmerian clutching a battleaxe with one hand and a scantily clad woman with the other. So I wrote a story in this same vein called “Conan vs. The Skateboarders.” Conan travels through an interdimensional portal and ends up in the Safeway parking lot in Bend, Oregon, where he does battle with the punk skateboarders who loiter there. Mrs. O’Shea liked it so much, she had me read it in front of the class, but the bell went off before I could finish and everyone walked out before the rousing conclusion.

Early on, I was getting rejected every day. The mailman, I’m pretty sure, had a special bag just for me—and he would dump piles and piles of form rejections on my porch. I had a wall of shame next to my desk where I would tape the “best” of them. I was so used to hearing no, I couldn’t believe it when I heard yes. This was at the tail end of my first year of grad school—and damn, I was so happy I would have cried if I was capable of such a thing. Instead a poisonous gas escaped the corner of my eye and killed a bird flying overhead. I called all my pals and mentors. My wife and I went out to dinner. I couldn’t stop smiling. No better feeling in the world, in part because I had to work so many years for it. I’m still chasing that first high.

If you look at great books...they are neither fish nor fowl, both “literary” and “genre.” Most of the time, we’re talking about phantom barricades. Stories kick ass—or they don’t.

I like the idea of pen and paper—I like the idea of human blood even better—but my process is boring and standard: laptop. My desk faces a wall. If I twist to my right, I can stare out a window at the four acres of woods I call home (a hardwood forest busy with owls and pileated woodpeckers and turkeys and raccoons and deer and coyotes). I write with all the lights off except for a desk lamp. My office is in the basement, what I call the dungeon, and ideally I’m spending six to eight hours a day down there, playing with my imaginary friends.

Early on, I was in such a rush. A rush to write, a rush to read. I gobbled up and pounded out thousands of pages without analysis, control. Which resulted in me having only a hazy memory of what I had read and a large bank of sloppily written stories. I have since learned the difference between hurriedness and urgency. Urgency is important—it defines me in many ways (I am always working, even when not at the keyboard)—but only if that urgency is matched with a need for perfection.

I don’t take myself very seriously (as anyone who follows me on Twitter can attest), so catharsis might be too dramatic and straight-faced of a word. But I will say that I’ve always loved epic, sweeping novels: TH White’s The Once and Future King, Ursula K. LeGuin’s Earthsea Trilogy, Stephen King’s The Stand, Gabriel Garcia Marquez’s One Hundred Years of Solitude. For a long time, I didn’t think I was capable of writing something like that. My mind seemed wired for short fiction. And then, in my late twenties, something happened. Maybe because I was teaching a novel writing class. Maybe because I was growing up emotionally and stylistically. But I could suddenly see and write on a vast plane, and it felt really good to complete Red Moon (a big meaty book that follows many characters in many places over several years) and feel like I had chased down a dream that seemed always out of reach.

Tyrion Lannister from George R.R. Martin’s Song of Fire and Ice series. The man can drink. And though he is short in stature, his wit is gigantic (and often filthy).

Northfield has a great little shop called Monkey See, Monkey Read, and I buy all of my books from them. My son might be their best customer. He proudly wears their T-shirt: Read or Die!

You spend thousands of hours crafting thousands of pages with nothing in the way of encouragement except the (perhaps silly) belief that you might one day move someone to laugh or gasp or cry, that you might educate, that you might inspire someone to action, that you might change their perception of the world. It’s noble—it’s also kind of insane. Of course you want to be applauded. And when the applause comes, it feels good. And when the shit-slinging comes, it hurts. But it’s healthiest if you’re able to tune out the noise. Don’t be unreasonably inflated or deflated by applause or criticism. The writer is ultimately drawn to the sorcery of storytelling for other reasons.

Besides, any time in your life that you do something gutsy—and writing a novel is fucking gutsy—somebody is going to take a dump on you. That’s human nature.

If you’ve read my craft articles or taken one of my workshops, I’m always wagging my finger, hollering at people about rules. Do this, never do that. I get annoyed by people who get annoyed with me, who say, “I hate prescriptive advice. I can do whatever I want.”  Good luck with that, buddy. Keep in mind that every time I fire off a command, there’s an asterisk next to it. If you’re awesome enough, you can do anything. But awesomeness ain’t easy to come by. Maybe you’ll never get there, and if you do, it will take many, many strenuous years to achieve. In the meantime, you need to know the rules. Build a solid foundation you can take a jackhammer to later.

When you started writing Red Moon, did you intend it to be a political/war novel? Also, what attracted you to writing about werewolves?

I map out every novel I write, sometimes a year in advance of hitting the keyboard. A ten-foot scroll hung from my office wall and I blueprinted the characters and plot of what is a horror novel—a war novel—a political allegory—a love story—a mystery—a western—with some sci-fi components sprinkled over the top. It will hopefully be both thrilling and thought-provoking.

I grew up on genre. I didn’t know the names Alice Munro or Tim O’Brien or Flannery O’Connor or Sherman Alexie until I took my first creative writing workshop in college. I fell in love with literary fiction, but I also grew frustrated with it—and with the sometimes snobbishness of the academy. If you look at great books—like Larry McMurtry’s Lonesome Dove and Margaret Atwood’s Oryx and Crake and Cormac McCarthy’s The Road—they are neither fish nor fowl, both “literary” and “genre.” Most of the time, we’re talking about phantom barricades. Stories kick ass—or they don’t.

I was trying to write a kickass novel, a supernatural thriller, and when I first sat down to brainstorm, I considered some of my favorite horror stories—some of the most lasting horror stories—and how they target cultural unease. Consider the way Frankenstein is born out of the Industrial Revolution or the way the Red Scare gave rise to Invasion of the Body Snatchers. What do we fear right now? We fear infection (look at the way Purell oozes from every countertop and storefront, the way swine flu and bird flu and West Nile dominate headlines) and we fear terrorism (as the Boston bombing sadly reminded us). I braided those two fears together in this, a post-9/11 reinvention of the werewolf myth.

Brilliant. Loved this. Percy is an amazing author, if you haven't read him, by all means, hop to it already.

I love his work. It doesn't hurt that he teaches at my alma mater. Unfortunately, I was there before his time. It would have been great to learn from him for a couple of years.