As I Lay Mostly Dying 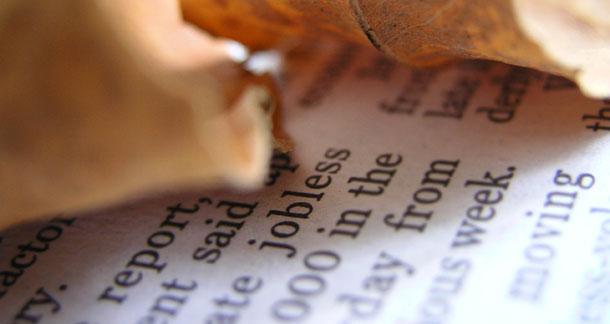 Everybody loves to badtalk the adverb, and I’ll usually jump right on that bandwagon. Except then, right in the process of jumping, I’ll realize I’m gleefully jumping, or blindly jumping, or some kind of –ly jumping — which is to say I hit a wall in my prose that I can only get over with that lolly-lolly adverb, as packing all the color into the verb’s going to draw just stupid amounts of attention to that particular sentence, when, really, it’s just one of those get-me-to-the-next-room sentences, no need for the spotlight, thanks.

All of which leaves me in the middle of the street, the page, looking for some other bad guy to jeer. And yeah, there’s the easy targets, fresh off the mount — avoid cliché, duck passive voice, you don’t know hyphens as well as you think you do, clever’s only clever if it doesn’t look clever, always remember you’re not Faulkner, the reader’s smarter than you’re giving him credit for, being funny’s cool, but trying to be funny’s definitely not cool, all that — but you either learn that in the third grade of this fiction writing school or the teacher just passes you anyway.

Not that I’m looking for anything that broad, either.

No textual effects in fiction?

Same for italicized foreign language, and for antique language in place of real writing, and for writing for the ages instead of for today.

None of which is something you can do a search for.

But then I round the corner of some sentence, a piece I’m reading, I hope, not writing, and there’s the baddest of the prose villains, that one word that, when mis-used, can single-handedly wreck an entire page of fiction for me, if not the whole piece.

To be fair, though, there’s at least three different kinds of As, maybe more, and I’m not talking about all of them here.

First and probably most common, is just the comparative sense, the metaphor: “Not as clumsy or random as a blaster,” where that second As is the metaphor, and the first one, that works just like “I want you to hit me as hard as you can,” only without the article, it feels more like some intensifier version of comparison. Just different flavors of the same thing, though, I suspect, the same way there’s two barely-distinct kinds of ‘thoughs,’ two so similar kinds of ‘too,’ all that.

The second sense of As, then, is the ‘since’-sense: “And then, as he was a tenth-level cleric after all, he fingered another Cheetoh from the bowl and explained to them what the runes said.” Or maybe I should say the ‘logical’ sense of As, as there’s also constructions like “As predicted, he had to use Madame Bovary in at least one example, or else it couldn’t be considered a craft essay.” But then that “As predicted” lead-off, it’s so much like all the idiomatic constructions or usages or conjunctions or whatever that you can hardly even talk without: As for, As of, As good as, As I was saying, As if, As though, As such, and on and on, As far as the pen can scratch.

The least you can say towards the greatest effect, please, always. Lack of objective correlative is a big reason why the fiction on the round racks so often takes six hundred pages to tell itself.

I don’t know. Luckily, though, those aren’t the types of As I’m getting at here.

No, the As I spend a lot of time circling in my angriest ink, it’s that temporal, sometimes causal one that one that hits right in the middle of the sentence, between two independent, not very related clauses, and could, without much juggling, be replaced by a while or a when:

The car’s wheels crunched through the gravel as she thought about him. 1

Is that ugly to you? Unacceptable? If not, then this isn’t for you, sorry. Neither is writing prose fiction, but hey.

If it is ugly to you, however, revolting even, an insult to the language and all the rhythms it contains, then why is it ugly, right?

For me, it’s the forced simultaneity, the shotgun wedding of two things that just happened to be shoulder to shoulder in the story. So, to give them that push into meaning, or to try to make them matter anyway, they’ve been fused together either in the hope that they’ll inflect each other higher than either would have reached alone, or on the chance that the first will somehow ‘mask’ that you’re smuggling in the second, which otherwise would have no home in the paragraph.

The car’s wheels crunched through the gravel as it rolled downhill.

Not nearly so weak, right? It’s because both independent clauses there, they’re actions. And actions can be linked. And thinking, sorry, that’s not really an action, unless your story’s just really, really boring. Granted, if you want you could go this way, so that each clause’s action is at the same level of inactivity:

The memories came flooding in as she thought about him.

But who would ever want to write a sentence like that? — ‘as she thought about him’ isn’t just wholly redundant there, it’s insulting.

How about this: replace the ‘as’ in that sentence with its cousin, ‘and’:

The car’s wheels crunched through the gravel and she thought about him.

This way, there’s not nearly so much relationship suggested. It’s just two things that happen to be going on spookily close to each other, but not, as As wants, at the exact same time. With ‘and,’ there’s some sequence — this, then that. No causal stuff, none of the reckless inflecting you get with a word that can replaced by ‘when,’ which already operates half the time as a logical coordinator anyway:

When the car’s wheels crunched through the gravel, she thought about him.

That’s saying the same thing as when the ‘when’ was an ‘as’ and was in the middle of the sentence. And, barring any ‘him’-associations for the character between either cars, reverse, or crunching gravel, the ‘when’ there, that inflated As, it’s simply suggesting things that aren’t there. It’s dishonest prose, and shouldn’t be tolerated.

Granted, there’s lots prettier ways of fixing a sentence hinged with As. You can change verb tenses in each clause, which tends to retain sequence but limit causality, you can split the sentence in half, right down the middle, or, usually, you can split it down the middle then drop one or the other halves. Economy, economy. The least you can say towards the greatest effect, please, always. Lack of objective correlative is a big reason why the fiction on the round racks so often takes six hundred pages to tell itself.

And if, out of plain stubborness or maybe because you’re the Prose Antichrist, you find yourself unable to do away with an As hinged between two clauses that neither have equally weighted actions nor are causally related, then at least consider this patch job:

The car’s wheels crunched through the gravel just as she thought about him.

Or even “right as,” or some other variant. It doesn’t really okay the shotgun wedding going on, but it looks a lot less accidental, at least, and — can’t you see her foot already on the brake now, just from that ‘just?’ It’s amping the sentence up, letting it matter just a little bit. Maybe her two-year-old son’s in the bath upstairs, and she’s just now remembering. Things are possible now, they way they weren’t with that naked As.

The real test for As, however, it’s not this, what I’m writing, it’s where you find it: in the prose of either beginning or just plain bad writers. Do you see it in Walker Percy? Charles McCarry? Jonathan Franzen? Rushdie? Writers who care about their prose, I mean, after a while, a while we never much see, they kind of just instinctually duck that bad kind of As — check Hemingway, opting for ‘and as,’2 or just try to find a clunky As in Nabokov.3 And, I mean, Percy, say. If you want a study of how to avoid those other prose crutches — though, but, however, yet, and even, too, just — read him line by line, then search those words in your own story files, then maybe ask yourself why you know his name, and nobody knows yours.

And, as for that adverb bandwagon, like Jerome Stern says, they’re most ugly in dialogue tags. You can usually slip them by everywhere else.

1 In my continuing efforts to not get on anybody’s hit lists, and to get off the ones I’m already on, I just paged through a novel I knew to be sloppy then nabbed the nicest instance of ‘as’ I could find — it’d be too easy to pick on the obvious uglies — and changed all the identifying stuff in the sentence.

2 My underlining, yeah. And, the complete sentence from his “The Last Good Country” : “It was so narrow here that his willow pole would have spanned it and as he came close to the bank he heard the turbulent rush of water” (110, The Nick Adams Stories). Note too how, in that same collection — one of the published stories — he uses a balanced As-construction as the hook, even: “The rain stopped as Nick turned into the road that went up through the orchard.”

3 Even in the places where it might have worked, where there really seems to be a causal relationship (if not a complete balance of actions), like this, from The Real Life of Sebastian Knight: “Suddenly I heard soft footfalls coming down the stairs and a huge man in a black dressing-gown with purple facings came bouncing into the room” (75). Rewritten with As, and patched, it would have looked like this: “I heard soft footfalls coming down the stairs just as a huge man . . . ” But of course, for a prose technician like Nabokov, even replacing ‘suddenly’ with ‘just,’ it wasn’t exact enough. Better to leave those kind of mistakes for lesser writers.

Great to read an article about prose and the idea of 'ugly' words. Me myself I keep a list of them which I read at the same time as I go over my list of new verbs. It is terrifying really how the list of despicable words can keep getting longer while you are still struggling to keep the original out of your text.
That was a very long sentence. Would be awesome to see a follow-up to this article with one that depicts how to keep your sentences short and why.

louisagholson from Abilene, Texas is reading Finding Your Way in a Wild New World July 17, 2012 - 9:55am

When I helped a friend study for English 101 online, I learned more about grammar. I didn't know the rules. The rules are clear to those who use them. I know I break them. As a writer concerned with placing thoughts on paper, I try to leave the grammar to the experts. I feel restricted most of the time. I do, however, read about grammar in the hopes that the knowlege will seep in naturally. I believe awareness is the key. While I'm reading other's writings, I can notice why they are set apart from the rest. I hope I grasped your intent in this article. A focus more on the awareness of what makes great writers true to their craft.

Interesting article. I have to admit I never thought much about "as" and how it can weaken a sentence. I'll have to remember that.