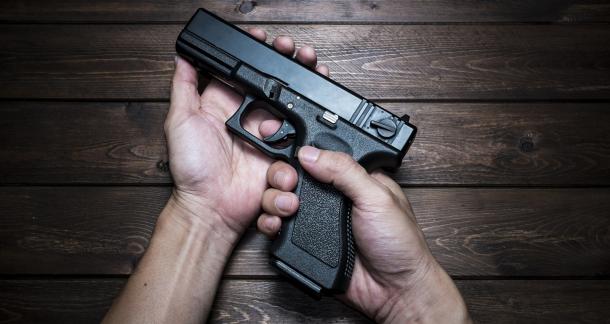 Perhaps your crime novel opens with a veteran patrol officer being shot in the thigh during a routine traffic stop. Or maybe the rookie detective in your short story takes a bullet to the shoulder to save a little girl from a drug-dealing biker. How long will each character survive without medical attention? Would they be able to walk away from their respective crime scenes? Would they suffer loss of motor control in their damaged limb? Would it hurt so badly that they’d scream in agony? Or would they go into shock and feel nothing at all? These are the types of questions a writer must answer before they put pen to paper when writing about gunshot wounds.

Given the fact that most of us have never been shot, how can we be expected to write accurately about a trauma we’ve never experienced? Well, the good thing is that most readers have never been shot either, so they won’t be able to criticize your depiction of the shooting. But that shouldn’t discourage you from trying to write it realistically.

Would it hurt so badly that they’d scream in agony? Or would they go into shock and feel nothing at all?

As long as the bullet doesn’t hit his brain or any major organs, my character will live, right? Nyet, comrade. Both the patrol cop and the rookie detective described above could be in serious trouble despite not being hit in the head or torso. The thigh encompasses the femoral artery, and the brachial artery is located in the upper arm. Both of these passageways are vital for blood flow from the heart to the rest of the body. If a bullet damages either artery, these characters could be dead in less than ten minutes without proper medical attention. Bleeding out is the first major concern when medical professionals deal with any gunshot wound. Use that blood loss to your advantage to create tension in your writing as your character waits for help. This site has a great charts for symptoms and amounts.

Shock is an acute medical condition that automatically results from most trauma. Most of us know this, yet many writers choose to ignore or forget about describing shock when writing major injuries. It also makes for great descriptive passages. Pale skin, irregular breathing, shaking extremities, rapid heart rate, lowered blood pressure and dilated pupils are all common reactions in a gunshot victim. Heavy blood loss will weaken the character’s pulse. Confusion and poor concentration can also result from gunshot injuries, even those that don’t involve brain damage, due to shock. It’s always great writing when you describe the action sequence leading up to a shooting and reveal your character’s thoughts and emotions after they’ve been hit, but don’t forget to get physically inside them and tell us what’s happening to their body as well.

In my legal career, I’ve had the opportunity to speak to numerous people who have been shot and I can tell you that their descriptions of the pain and their reactions to the injury vary greatly. Every firearm injury is different. Some bullets will rip through the human body leaving an entry wound and an exit wound. Others will remain in the body and need to be surgically removed. The location of the wound, the type of firearm and ammunition used, and the distance between the shooter and the victim will all be factors in how serious the gunshot wound will be. This is where your research really comes into play.

How often have you read a crime novel where the character gets shot and then two chapters later they’re engaged in physical activity like chasing a perpetrator down a back alley and climbing over a chain-link fence? Make sure that the injury and the damage it causes is reflected in the character’s actions for the rest of the manuscript. Gunshots often leave permanent damage to muscles, nerves and tendons that result in limited mobility and chronic pain. Even in the case of a total recovery, a ‘simple’ gunshot wound can take months or even years to heal and the psychological healing can take much longer. And don’t forget about heavy doses of antibiotics and the risk of infection along the way.

Last but not least, we’ve all read about characters getting shot in the foot or the hand and continuing to function relatively normally by pushing through the pain. Both the hand and the foot contain numerous small bones and joints that would likely shatter if stuck by a bullet, not to mention the tendons and nerves that would likely be damaged. It would be excruciatingly painful and it would severely limit the characters mobility in that extremity. No punching, reloading or dialing 9-1-1 with that injured hand. No walking across a parking lot or driving the police car with that shot foot.

Two books I would recommend to all crime and horror writers are Benjamin Sobleck’s The Writer’s Guide to Weapons and D.P. Lyle’s Howdunit Forensics. Both are excellent resources for various wounds and weapons, and the realistic portrayals of both in fiction. Also, get yourself a decent medical textbook or bookmark a basic anatomy website like innerbody.com, or a more comprehensive medical site with a search function like this one for reference. If you’re writing crime or horror, these will come in handy over and over again in your research. For further reference on medical treatment and recovery from gunshots, here are two good articles about bullet wounds from the perspective of a trauma surgeon.

I came to the conclusion that studying any direction I can not compose a well-written narrative. I understand that it is better to seek help from online nursing papers specialists. I believe nursing writing is critical to any student's learning process. When it comes to research, the importance is doubled. In fact, not every writer who specializes in one subject can perform tasks in another. This company employs many professionals in various fields.