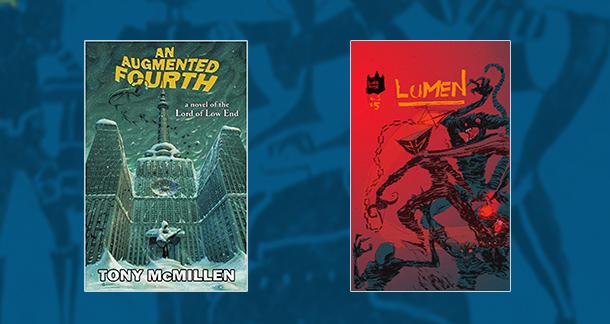 Comic books are not graphic novels. The term “graphic novel” was popularized in the 80s to make collections and other long form comics more palatable to outside readers (i.e.: anyone who doesn’t frequent a comic shop) who might otherwise never pick up a copy of Watchmen. But comic books do not tell stories in the same way a prose novel does. Comic books are comic books. And if you’re a novelist looking to try your hand at writing one, you need to embrace this fact and develop a new facet of your craft, so you can create a story that not only works as a comic book, but one that works best as a comic book.

Almost sounds like I know what I’m talking about, doesn’t it?

That wasn’t always the case. Like with most things, I only learned by fucking up spectacularly the first go ‘round.

Let me be your crash test dummy here. (Stop humming that goddamn song!) Because I know from firsthand experience all the pitfalls that await a novelist transitioning into writing comics.

My second novel, An Augmented Fourth, was published by Word Horde last year, and I have a completed trilogy of new novels I’m working to get published this year. So I have some experience writing a novel.

I have also written and co-created the longform comic Oblivion Suite with artist Catalina Rufin, and have recently written, penciled, inked, colored, lettered and published a four-issue series called Lumen all by myself, therefore I think I can say I know how to make a comic book.

The term “graphic novel” was popularized in the 80s to make collections and other long form comics more palatable to outside readers.

Would it surprise you that Lumen, the comic I made all by myself last year, is a much better comic than my first, Oblivion Suite, made with Catalina Rufin? Is it because I’m a better artist than Catalina? Hell no. Catalina is a much more accomplished cartoonist than me.

Then why is Lumen a better comic?

Because actually drawing and lettering a comic myself taught me how they work. Before that, poor Catalina would have to fix all the storytelling mistakes in my script.

Sadly, this learning the hard way routine is one repeated from when I first starting writing novels, because before that I had only written screenplays. I even attempted to turn one script into my debut novel, which, upon completion, I realized didn’t really work.

Because the story had been geared towards an altogether different medium, and I didn’t have the proper level of skill to adapt it to another.

My advice is forget adaptation. For your first comic, make sure the story is whole cloth intended to be a comic. Don’t be that smug, idiot child proudly presenting their square peg shoved successfully into a round hole… because littering the ground will be the remains of the corners chewed off to make that geometric abomination possible.

Just like a screenplay is not a novel, a novel isn’t a comic. So what are some of the differences?

Excelsior true believers and so on and so forth… Let’s play bad Stan, good Stan.

Have you ever read any of Stan’s actual writing? Beyond the purple prose and word-cluttered panels, the biggest sin Stan made as a comic writer was over-explaining what the artwork was already telling the reader.

One of the greatest advantages a comic has over prose is that the visuals are there to help convey information to the reader. Remember the show don’t tell thing we tell ourselves as writers over and over again (even though we should be showing it)? Well guess what? That goes double for comic books because all those pretty pictures show everything.

Bad Stan: Not giving credit where credit is due.

Not to turn this entire column into a conversation on creators’ rights and how Stan Lee could have done a helluva lot more to help the artists and co-plotters like Jack Kirby and Steve Ditko who co-created all those Marvel characters everyone loves, but I do need to stress that as a comic writer you are going to need to collaborate and you need to be upfront with your collaborators. On who owns what, what their rights are, and how they get paid for their contributions.

For your first comic, make sure the story is whole cloth intended to be a comic.

Basically, don’t screw anyone. If you view yourself as the sole creator of a story and character, tell the artist you’re working with at the outset that you will be hiring them as an employee and that any characters they design will be owned by you alone.

Personally, I think that’s bullshit. If someone designs the visual look of a character, I think they at least partially created it and should be compensated, but it’s up to you. Creative collaborations do get murky and it’s legitimately hard to quantitate how much a total creative endeavor derives from one aspect. I remember hearing that Gun N’ Roses used to divide song writing credits into a pie with slices like, lyrics, melody, music, arrangement, and each slice would then represent a different percentage of the overall song credit pie, and therefore a different amount of royalty towards whoever contributed it.

Which sounds byzantine as all get out, but at least they had a standardized system. Of course, Axl Rose also blackmailed the rest of the band by refusing to go on stage unless the band signed over their rights to the G n’ R catalogue to him, so… Axl Rose was being an even worse Stan Lee. Don’t be Axl Rose either.

Editing is something Stan Lee unequivocally excelled at. He knew how to build a team and then play to his team’s talents. A good way to achieve this is simply talking to your artist. Even if your established relationship is a work-for-hire situation and they’re technically your employee, they are still a creative collaborator, and to get the best out of them and your story you need to play to their strengths and find out what makes them tick.

A great example is the bestselling Saga, published by Image comics. Early on writer Brian K. Vaughan asked artist Fiona Staples what she did and didn’t like to draw, and she said she wasn’t too fond of drawing mechanical things. Vaughan was like, This is a sci-fi epic with spaceships…so, shit.

But then they came up with making the main characters’ spaceship a giant organic tree. Much more memorable visually than another generic spaceship, and it opened up possibilities for the writer that where previously unavailable before he got to know his artist.

Empathize with your artist while writing, too. Because it takes three seconds to type: A crowd of hundreds looks up. But it might take three days to draw that.

I’m not pushing everyone to draw a comic, but I am suggesting you try drawing a thumbnail, a stick figure version of your script before handing it off to an artist. Plenty of big-name comic writers like Alan Moore and Grant Morrison practice some version of this. Morrison doesn’t even show his artists his thumbnail comics. He uses them to get a better idea of what works in his script and what doesn’t. Actually mapping out your script will help you realize when you’ve put way too much action or dialogue in too small a panel. If the page’s layout is confusing or the flow is off. Or if you can tell the same story better with a different amount of panels. It will also keep you cognizant of the page turns so you know when to stage your big page reveals.

Here’s a big reveal: page reveals in comics are important and inherently a comics thing. Basically, if you’re going to reveal that secretly underneath Spider-Man’s mask he’s Thomas Pynchon, it’d be more impactful if that was on a left facing (even numbered) page, so that only when a reader turns the page do they discover that no one actually knows what Thomas Pynchon looks like.

Again, you don’t have to show your little chicken scratch comic to anyone else, but making (along with everything else we’ve covered) will help you immensely in understanding what makes comic book storytelling so unique, graphic, and yes, novel.

Tony McMillen is the author of the novels Nefarious Twit and An Augmented Fourth.