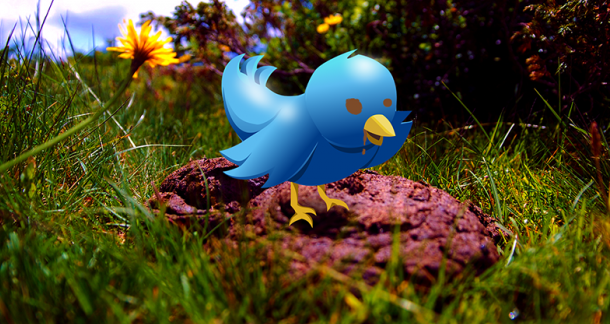 Writers lifts are a pyramid scheme—excuse me, “multi level marketing” scam. They take advantage of you, suck you dry (in the bad way), and leave you with no benefit.

Allow me to explain.

What A Writers Lift Pretends to Be

Someone will jump on Twitter, say, “Let’s do a #WritersLift!” The tweet usually comes with a request to tweet out your website, book cover, shopping links, etc. in a long thread along with a bunch of other authors.

The presented idea is that by creating this long thread of books and authors, an indie author pulls a little more attention than they would solo.

What A Writers Lift Really Does

And let’s say you follow an author, we’ll call him @PyramidSchemeAuthorDouche, and he puts out a tweet that says, “Let’s do a WritersLift! Hit me up with your books, links, etc.”

What I see may be as subtle as your tweet with a line above indicating that there’s something that prompted your tweet, or it may be as blatant as seeing the quoted retweet and most of the original tweet embedded in yours.

Everyone else who follows you might see the same thing. And because indie authors tend to group up on Twitter, a lot of indie authors end up seeing the original tweet.

When a tweet gets lots of likes, retweets, and comments, it spreads further. The algorithms of social media see a tweet moving up quickly, and they then show the tweet to more people. Once it pierces the bubble of @PyramidSchemeAuthorDouche’s normal following and starts getting traction outside that bubble, it increases even faster because the algorithms figure it's great content that a lot of people must want to see.

Why It’s a Scum Scam

It’s a lot more work. Which is usually the case when you're doing work for yourself instead of tricking other people into doing it for you.

While the writers lift helps @PyramidSchemeAuthorDouche's original tweet spread further, it doesn’t spread the subsequent tweets, including yours, a whole heck of a lot.

The idea @PyramidSchemeAuthorDouche is low-key pushing is that by creating this long chain, everyone in the line will get more attention. But that’s not really how Twitter works. The only people who will see your link in that chain are A) People who follow you already, and B) Someone who sees the original tweet and decides to just look through a long chain of replies by random-ass authors linking to their bullshit.

When you engage with a writers lift, your tweet will be seen by almost no one outside of your normal Twitter following, while the original tweeter’s tweet will spread far and wide.

Essentially, you’re taking your share of social media attention and passing it up the chain to the person at the top.

So it's not strictly a pyramid scheme, because the pyramid scheme at least has the decency to pass SOME money onto the layers of people below the very top.

The People You’re Not Reaching When You Participate

Agents do not go through long lists of writers lift tweet strings. It’s not where Mr. Random House is looking for the next big thing.

Readers/book buyers are not going through these lists.

The starter of a writers lift makes no guarantee or attempt to control the quality of the books that make up links in the chain. It’s not like the original tweeter is really endorsing these books.

The lists of books are functionally useless to readers and publishers.

@PyramidSchemeAuthorDouche does it to boost his Twitter presence. He gets retweets, likes, follows, all that shit, all the while pretending to carry the flag for indie authors.

Don’t be fooled, the only flag he's carrying is one with his own Twitter handle scrawled across it.

There are more and less scummy versions of the writers lift, which are more or less scummy based on how blatantly they outline what they’re doing.

This is the version where someone says, “Let’s do a writers lift, I want followers / Here’s my book.” It’s not really a writers lift, per se, it’s just begging for followers. This is silly, but fine, whatever. At least it's transparent. 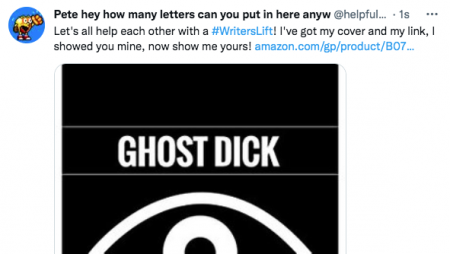 This usually comes with promo of a book, and the person does say they're promoting their own book, so at least they're telling a portion of the truth. It's borderline, it's dishonest about the level of mutual benefit, but at least it's clearly a give and take. 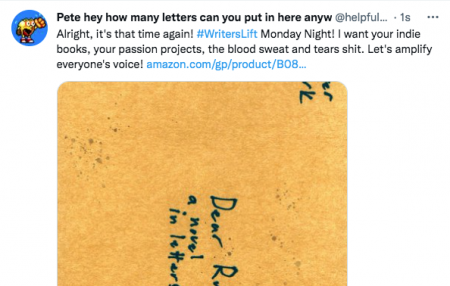 In this version, I pretend like I'm here for YOU, and I don't necessarily mention my own book...but it just so happens to be linked and have an image right there, ripe for the retweets. Convenient, no?

Won't Participation Get Me SOME Attention?

It’s vaguely, hypothetically, scientifically possible that someone who initiates a writers lift will like your post, which makes it vaguely possible that your post will show up in the feed of someone who already follows that initial tweeter. But is that enough to convince someone to buy your book?

Maybe the best way to put it: How many writers lifts have ended with YOU buying a book by someone other than the initial tweeter?

If You Do Writers Lifts:

It’s hard to market a book, and there are a lot of indie writers out there who aren’t too Twitter savvy. You scumlords are taking advantage of everyone else’s ignorance in order to promote your own work. You’re taking their desperation, which most indie book folks feel, and turning it into your personal store of social media energy.

It just…sucks. You just suck.

If you want to help indie authors, tweet about their books in ways that don’t force a reference to your original tweets. Tweet about them in a way that’s not about you, it’s about them. YOU can tweet out their links. You can tweet short reviews of their books. You can link to their newsletters. You can retweet their tweets if you enjoy them.

This will require you to actually read some indie authors so you can recommend their books and know what the fuck you’re talking about.

It’s a lot more work. Which is usually the case when you're doing work for yourself instead of tricking other people into doing it for you.

Get Lying for Money: How Legendary Frauds Reveal the Workings of the World by Dan Davies at Bookshop or Amazon

Sharing the love is what the Twitter Pyramid Scheme is all about. When you tweet, you can choose either to follow someone or to share a “shout”. Shouts are links to articles or other content that may be useful to your followers. Need you can get Concrete Cutting here latest ways about the concrete. The links are then reshared by others, allowing the link it was tweeted from to be seen by more and more people.