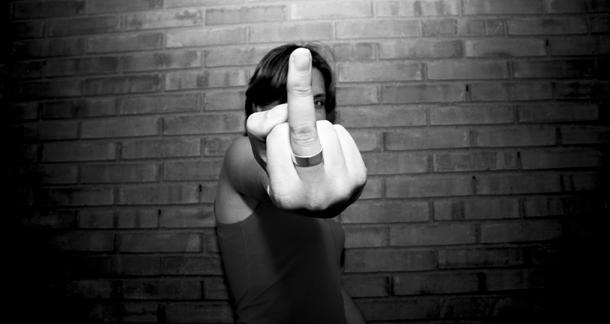 There is going to come a time when you have to say: Fuck it.

When that time comes, an entire industry — authors, readers, friends, self-publishing gurus, the latest bestsellers showing up all over Amazon, your auntie — will be waiting, ready to tell you not to give up. Most of them will only mean well. They’ll say that with enough patience, savvy, dedication and, perhaps, enough talent, you can get your book out there. Or that your next book will sell better. Or that you can make a fortune if you just market your book in the right way, so why give up now? Or that you might as well release that book yourself, because that’s where the future is, and that you really ought to do it soon because it takes time to build a platform.

I would like to encourage you to say: Fuck it. Because the likely thing is that everyone is telling you not to give up, without even asking what “giving up” means. I’m not telling you to stop writing (and if you stopped writing just because I told you to, you may be in particular need of learning to say "fuck it"). I’m telling you, at the risk of you calling me an asshole, to stop behaving like a frustrated, insecure, socially oversensitive author, which is what you become when you buy into the image of the author that we have created as a collective.

Becoming your own best self-promoter may be a necessity in this age, but that is mainly according to the logic of a market that isn't in any way geared toward creating a healthy relationship between an author and her work.

Everyone agrees, without really thinking it through, that there aren’t many iconic writers of the “old sort” left — no modern Hemingways or Colettes or Mailers — those whose lives were romanticized even as they were going on. This is just self-serving nostalgia to distract us from what an author is now: a social media child, marketing herself, gushing to her own fans on Goodreads, amazed at how unhelpful her publisher is, painfully conscious of those Top 50 lists in her genre. In all likelihood this really is the future of being an author, but if you are having trouble keeping track of what is “you” and what is merely the walking-on-the-red-carpet part of writing, and it is making you sad, then it’s time to say it. Fuck this.

Say “fuck it” the next time you’re worried your novel isn’t enough like the ones that are selling right now. Say "fuck you" to the person who tells you it's not bad to keep an eye on what's selling. Even if they are right, they're still wrong.

Say “fuck it” to the temptation to submit your manuscript somewhere too early, just because you’re eager to be recognized as a writer. If you need the validation, get it from something else, or you will most certainly become "that" author on Goodreads.

Fuck flattering all your writer friends so they'll give you an overblown blurb for your next book. They probably won't even read your book before blurbing it.

Rethink your blog dedicated to giving writing advice. There are more of them now than there are readers. If your writing advice is very good, either charge people a lot of money for it, or take that advice yourself and go write well.

Fuck trying to be the author who gives amazing interviews and inspires everyone by how chilled out and wise she is. Either be that person, or don’t, but don’t let yourself be too worried about whether you are likeable as a writer at the cost of changing yourself for an audience. If it’s a performance, it doesn’t matter what anyone says to encourage you — you’re lying to yourself, which is best done on paper.

Fuck the constant agonizing over everything except the writing. That cruel review of your book, written by someone you’ll never meet. That comment that guy made in your writing class. The apparent indifference of your loved ones to this new piece. Your own insecurities as you wonder whether people will realize that the unlikable protagonist is just you with a different name. The fact that the biggest douche you have ever met has somehow landed a big book deal. The possibility that the novel is dead.

Stay away from people with whom you tend to compete when you’re insecure. Competition among writers isn’t necessarily unhealthy, but the odds are not on your side. Go read a book by someone you admire, and who is dead, or not your friend. Then write in conversation with that book. Compete with an old soul. If you get called an old fuddy-duddy, just remember how ridiculous that insult is, even if it's expressed differently.

Stay the happy hell away from the internet when you’re in that place of vulnerability. Stop Googling your own name when you’re not sure whether you exist. If you are getting published, resist, by any means, the temptation to validate yourself online when you are feeling insecure about your new book. Don't go searching for reviews of your old work to cheer yourself up. The internet may be an incredible resource, but it's just a resource, not a reflection of your worth as an artist or person. Does this sound obvious? Then why is it so easy to forget?

The farther along you go in your career as a public figure of any sort, the more you will be scrutinized. This, too, is obvious, perhaps even a tautology. But after this last decade of social media and click-baiting, and all this manufacturing of online outrage, these revenge porn websites, the spectacular stupidity of certain online forms of activism (Kony 2012), the anonymization of hatred and the fact that once it’s on the internet, it’s there forever, you will end up wondering a few things. Is anyone not a public figure now? Is there a novel to be written about this kind of site, or that new meme? These can be interesting questions. Maybe you could write a book about it. But you will probably emerge from that cesspool weakened, so if you’re feeling that urge to say “fuck it” and the urge is stronger than you want to admit — then get the fuck off the internet, where everything can be scary for us sensitive souls, and go write.

So much of the advice a budding writer is given these days is passed off as career-based that it's easy to overlook the dark side. Building an author platform may be a good career move, but it's also a matter of psychological habits: exposing yourself to the scrutiny of people whose money or loyalty you seek, putting on a mask you may not want to wear to sell your work primarily as an extension of that mask, getting stuck in a genre-rut. These things bring more limitations than we might realize. Becoming your own best self-promoter may be a necessity in this age, but that is mainly according to the logic of a market that isn't in any way geared toward creating a healthy relationship between an author and her work. It's a market. We spend a lot of time telling ourselves otherwise. But if you scoff at the idea of a "healthy relationship between an author and her work," congratulations. Perhaps I am just weak.

There is nothing wrong with saying "fuck it" to all of this pressure. You may not be as widely published as quickly, and people may not leave as many comments on your blog as you'd like, and you may never be able to boast about reaching a top 3 spot on Amazon.

This is all okay.

THANK YOU SO MUCH FOR THIS! It gets to the point sometimes when every link I see about tips to market your book or expand your brand makes me feel literally sick. A lot of times I'd rather just write for myself forever and not deal with any of this crap. And "then get the fuck off the internet, where everything can be scary for us sensitive souls, and go write." is right on the money. I swear sometimes I get "internet poisoning" and I have to just log off and do something by myself to remind myself that there's a real world and that these people online can't actually get me.

whoa....just stop...were you reading my mind today? this week? this month? wow. thank you a million times thank you for this post. FIST PUMP. I am now your fan.

And yeah, most definately: Fuck it :)

Seriously, it's exhausting worrying what everyone else thinks of you. It's even more exhausting modifying your behavior in the hopes of changing that. I mean, I do care. Of course I care. I just don't have the desire to do much about it when I could be doing the things I love instead: creating and consuming.

I certainly hope so. I always get excited when I receive notification that 'Anonymous' has posted a comment on my blog. And then I realise it's spam.

It's strangely comforting to think that at least my blog is being visited by spambots!

Thanks for this. Needed it today.

Fuck it. Fuck this, fuck her, fuck him, fuck you, fuck me, fuck them, fuck it all.

I suppose whether I agree or disagree is irrelevant, but I like this, and I think there's truth in it. As long as somebody will still publish you, the rest is what it is. You can't change it or reliably wield it, so may as well quit worrying about it.

Yes, how about that?  Fuck it.  Just write something you want to read.

Tony McMillen from Mostly glorious Tucson Arizona but now I live near Boston. is reading Not, I'm writing March 17, 2014 - 9:54am