When Calvin Met Hobbes: Calvin and Hobbes' Most Memorable Christmases 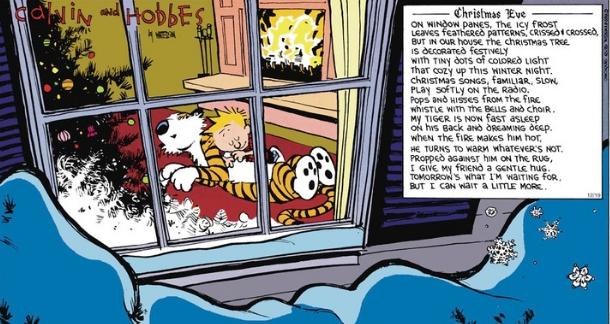 Nothing inspires a child's imagination to run wild quite like Christmas — with the stretch of school break and the promise of presents. It certainly beats having to worry about bills and work! What better way to reminisce about the best season of the year than revisiting the adventures of precocious six-year-old Calvin and his anthropomorphic stuffed tiger, Hobbes.

Here are twelve memorable moments from Calvin and Hobbes to get you into the spirit of Christmas.

“Be vulgar and crude! I like it when children are boorish and rude!”

Less than a week before Christmas, Calvin dreams that his dreams have come true: Santa is now on the side of the naughty kids!

Calvin takes some time to reflect on the true meaning of the season—it’s all about consumerism, right?

“I can’t take the suspense!”

Will there be coal or gifts under the tree? While Santa makes his final decision on Calvin’s Christmas fate, the boy can’t sleep, anxiously awaiting the ruling. Perhaps sending a 30-page wish list was not the best of ideas...

“Why does man create?”

Over the years, Calvin has built snowmen to terrify and bewilder his mother. In this particular case, however, his latest creation has led to an existential crisis, it seems.

Hobbes convinces Calvin that true happiness comes from a life of virtue. Calvin's experiment with generosity doesn’t last long, however, and he is back to his old antics soon enough. But hey, at least his parents had a well-behaved kid for a little while!

“This season gets less jolly every year.”

Knowing that Christmas is the only leverage he has over his son all year round, Calvin's dad decides to take this power for a spin—much to his wife's displeasure.

“I’d leave out the part about the temps.”

Tired of not getting the thousands of items from his Christmas list, Calvin finds the perfect loophole—to ask for millions of dollars and buy them himself! What could go wrong?

“But maybe good is more than the absence of bad.”

Calvin and Hobbes have a philosophical debate about goodness—the likes of which Nietzsche would be proud!

“I think as long as you suffer for your sins, they shouldn’t count.”

You reap what you sow. And it Calvin’s case, you hope that’s enough to keep you from getting coal on Christmas.

“I wish Santa would publish the guidelines he uses for determining a kid’s goodness.”

A good question brought on by Calvin: How does Santa measure goodness? In other words, just how many snowballs can he get away with throwing at poor Susie?

“So long, Mom! Hobbes and I are off to the North Pole!”

We're on his Mom's side: What did Calvin do that required his appearance in Santa court?

Typically, Calvin can do without the 12 days of Christmas—he's only in it for the morning of the 25th, when he can finally tear into his goods. This year, however, Calvin indulges in the gift of "presence" and lives for the sweet moment of comforting his best friend.

It’s been over two decades since Bill Watterson published his final strip. In spite of this, his work hasn’t dated at all. Like an open field blanketed in snow every winter, the musings of a young egomaniac and his faithful feline friend are waiting to be enjoyed by generations of readers, both young and old. So, this Christmas, pour yourself a big bowl of sugar bombs and treat yourself to a healthy serving of Calvin and Hobbes.