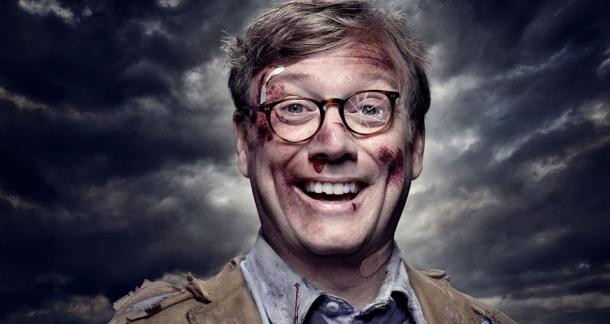 At first glance, Comedy Central’s Review is nothing more than another episodic sketch show. Andy Daly plays Forrest MacNeil, host of his own show, also called Review. In Review, MacNeil reviews life experiences at the request of his viewers. For instance, a reviewer might request to know what it’s like to be racist, or what it’s like to steal something, or maybe even what it’s like to eat fifteen pancakes. Whatever the request is, MacNeil is game. He goes out into the world and he experiences the life people only wish they could experience, which he then rates on his patented five-star system. Each episode of Review contains two-to-three reviews. None of them are exactly connected; thanks to the viewer request system, each review is random.

Now, with the above set-up, Review could settle comfortably as another sketch show. And there would have been absolutely nothing wrong with that. One of my favorite comedies, Key & Peele, just so happens to be another Comedy Central sketch show. But Review has much bigger aspirations. It uses the standard sketch set-up we’re all familiar with to present some of the best experimental fiction I’ve ever witnessed. Here’s why:

'Review' is basically a modern 'Moby-Dick'. Forrest’s infuriating desire for success is the real core of the show.

It makes you work for it.

There is a plot here that exists beyond each review. This plot, however, is not out in the open. The viewer must dig for it. Because we can only see what the fictional Review chooses to air on its show, we must piece together the plot and connect the various sketches and background nods to something much larger than what we are initially given. We only see what the fictional producer of Review wants us to see. The format’s confinement blossoms into innovation.

This is a story of a man who might be mentally unstable, but is probably just extremely stupid and naive. A man who is so devoted to the success of his television show that he will do literally anything. When Review begins, Forrest MacNeil has everything he could hope for: a good job, a wife, and a son. When he strolls down the street, he wears a smile worth a thousand winning lottery tickets. Then comes episode one, which involves Forrest reviewing the following life experiences: stealing, drug addiction, and going to prom. Review is the story of a man who has absolutely no problem with stealing a cop car for the purpose of his show, or purposely getting addicted to cocaine. When his family holds an intervention for him halfway through his drug addiction review, he couldn’t be more thrilled. Because interventions are so integral to a normal drug addict’s experience, Forrest knows he is succeeding at doing his job. It doesn’t matter that his family and friends are at his feet, crying and pleading for him to get better. Their tears are an acknowledgement that he is an exceptional employee. As his sobbing wife drives him to rehab, he turns to the camera and gives it a thumbs-up.

The show itself is a main character, and it will not stop until Forrest has died.

In episode three—brilliantly titled “Pancakes; Divorce; Pancakes”—Forrest is met with an unexpected request: “What is it like to be divorced?” At this point, a normal human being might laugh at the request and choose to skip it. But Forrest is not like normal human beings. He is a man on a mission, and if that means randomly divorcing the woman he loves with all of his heart, he will follow through with it, despite how much it utterly pains him to do so. His family is ripped away from him by his own actions. If the show tells him to do something, he must do it. There is no Lovecraftian creature working behind the scenes forcing him to obey the show’s commands. Forrest chooses to go through with the show, no matter what, because it is his job. His devotion pushes the plot of Review forward. Similar to Breaking Bad, Forrest begins with everything and ends with nothing. Throughout the course of the show, he loses everything he loves. His greed of success blinds him from anything that truly matters. All he cares about is doing the best goddamn job he can do, even if that involves attempting to shoot an apple off his son’s head with an arrow, or being buried alive.

Unlike most sketch shows, Forrest’s life does not reset at the end of each episode. His actions carry him throughout the series. The rage and depression gained from what he has lost fuel him through some of the toughest review requests imaginable. Review is basically a modern Moby-Dick. Forrest’s infuriating desire for success is the real core of the show. He will not stop for anything or anyone until he captures it.

As the viewer watches Forrest struggle with each new request, we can’t help but feel sorry and hope for something easy, something pleasurable. But nothing is ever pleasurable, because Review is the offspring of Chuck Palahniuk and Thomas Ligotti. If Forrest should have learned one thing from his now two seasons of reviewing life, it’s that life is fucking terrible and will always go out of its way to destroy you. Hell, even a simple afternoon nap on a rowboat turns disastrous.

'Review' teaches us there is more than one way to tell a story.

It teaches us that characterization is always a writer’s number one priority. There’s a scene in season two when Forrest stumbles across his ex-wife’s profile on a dating website, and it is absolutely heartbreaking. On a typical sketch show, the viewer would react differently. It might even be funny. But we’ve been with Forrest for so long, we honestly feel sorry for the man, we are filled with a powerful sense of dread. Forrest MacNeil is as real to us as Walter White or Tony Soprano ever was.

What Review has achieved is quite outstanding, and something all writers can learn from. The best way to get your reader’s attention is to introduce something already familiar, then proceed to completely turn it upside down on them. Review sneaks up on you and you don’t even realize you’ve fallen in love with the main character until it’s too late. You go into it expecting a couple random comedy skits, and you come out of it reevaluating your entire life.

If I've learned anything from Review, it's that there's always other options. There's always a way to stay fresh and innovated. We are all artists. It is our job to shake things up and make our viewers experience things in ways they never have before.

We are all Forrest MacNeils.