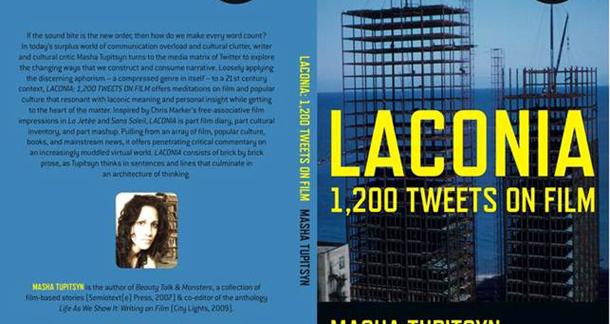 Remember when Jennifer Egan wrote an entire short story that she posted one tweet at a time? There was a curious kind of reaction at the time from the mainstream media. It was a mix of excitement, skepticism, ass-kissing, ass-kicking and opinionated comments from online goblins. On a Guardian article about Egan's upcoming story at the time, you could read the kinds of brilliantly thought-out, constructive comments everyone expects from everyone else on the internet:

Goon Squad was ?! (well written ?!, but ?! nonetheless). This twitter stuff borders on sad. Yeah I will not be reading it as Egan has lost me as a reader. Just as I'm sure a book made of tweeny texts would not be up my alley. Just saying

But you could also find, less sarcastically, some actual points being made — or, instead of calling them points, let's say some issues were being raised:

Interesting experiment, by the way, even with prose. It'd be nice to see if it's possible to keep the narration going, in any way that might resemble conventional novel-writing.

Comments like these are more interesting than people like me might give them credit for on a bad day. It's not just what they say; it's what their authors fail to notice is being said. Is it possible to keep a Twitter narrative (or "narration") going in a way "that might resemble conventional novel-writing"? That depends on a lot of things. What keeps any narrative going? What keeps serialized fiction going? What's that element of "flow" and where does it come from? And as for the second comment: what does the problem of spam do to the idea of internet fiction? Is the appearance of spam eventually going to be like someone coughing during a play — something annoying but you can't do anything about it?

We are training ourselves through these artificial restrictions, for good or bad, to be so very to-the-point that we often have no point to make.

Online communication and literature are still wrestling each other. It's not just the basic questions: Will we someday have the Collected Emails of today's biggest authors? Are memes and random cat pictures artistic in some sense?

It's deeper, more unsettling questions, too. The kinds of questions Egan's Twitter story raised, not in itself, but in its exposure to people who live in this world, at this time, with these ingrained behaviors.

They are questions about art, its forms, and the forms of thinking that allow us to talk about art in a meaningful way.

Is there something of the public artist in the relentless troll? This is the basement-dweller who, if he's good, can make people believe something enough to react against it, or make a patently false story "true" and elicit real emotions from something his victims would otherwise have dismissed as trivial...

If collaborative projects, from YouTube video mashups to forum-based role playing games, place specific restrictions on those collaborations, how do we decide how successful those collaborations were? Which standards do we rely on, generally, when we ask ourselves if a meme, or a derailed thread, or a single post on Facebook has "turned into art"?

Of the many new ways people already take for granted when they want to connect, Twitter is a very particular kind of beast — one with, I think, enormous transformative power. It's the endlessness of it combined with the 140 character limit. When I first gave Twitter a go, I couldn't believe how quickly those tiny messages got lost in the noise. It seemed overwhelming when I tried to keep up with it. But the very idea of a strict character limit has stuck with me for a few years. The questions I've been generating above are all interesting to me on some level, but here's the one I click with:

Does thinking itself change when you have character count restrictions, or does an elaborate thought just have to find condensed expression?

People have already started wondering this kind of thing. There's a book by Masha Tupitsyn released by the press I help run, published before I joined the team and now sadly neglected, called Laconia: 1,200 Tweets on Film. The title sums it up; it's a book that collects the author's super-short analyses of movies from personal and theoretical perspectives. I love it.

It's the kind of thing I get obsessive about. I'm living in the UK right now, and this is one of the places where people are going nuts over Cognitive Behavioral Therapy (CBT), a cheapish but effective set of psychological tools to help you overcome your anxiety, your depression, and so on. What I've found fascinating about it is how strongly it emphasizes taking control of your own thoughts, breaking down destructive thought patterns over time, and restructuring (slowly) the way you think about certain things that used to cause you discomfort. Twitter, to me — and I have struggled to explain this to people around me, so I hope I do a better job here — strikes me as related in spirit to this approach to structure and expression, but used for entirely different ends.

But when you want to think the Twitter way, you don't necessarily have to feel reduced to silence. One of the best things about books like Laconia, for someone who considers the ways things are expressed to be as interesting as the things being expressed, is that it takes this challenge on. It sometimes uses the jargon of cultural studies or critical theory, but have a look:

Night at the Museum 2: Battle of the Smithsonian, which I saw on a plane, is a signifying mess. A paean to a culture of non-differentiation. 3:23 PM Sep 24th

The unexpected result of using critical-theoretical jargon in a tweet is that the whole thing seems palatable. I deal with this kind of jargon daily, almost hourly, and even my familiarity with it is sometimes not enough. When the very influential (and usually more eloquent) academic Judith Butler was awarded a notorious prize for bad writing, it was for this gem:

The move from a structuralist account in which capital is understood to structure social relations in relatively homologous ways to a view of hegemony in which power relations are subject to repetition, convergence, and rearticulation brought the question of temporality into the thinking of structure, and marked a shift from a form of Althusserian theory that takes structural totalities as theoretical objects to one in which the insights into the contingent possibility of structure inaugurate a renewed conception of hegemony as bound up with the contingent sites and strategies of the rearticulation of power.

Imagine if Butler had been confined to a Twitter world. The beauty of this is that suddenly, the sheer practical helpfulness of jargon is brought to light. Get in a couple of highly meaningful if ambiguous words (the "signifying mess" from Laconia is relevant here) and you have a bite-sized, interesting, cryptic but interpretable nugget of film theory.

It's just an example, but I think it works to show the other side of Twitter's potential for changing how we do things. It's not really a Twitter fetishism, either. I don't care if it's Twitter or another service that's more indie or something created by Coca-Cola that gets people doing this kind of stuff. It's the fact that somehow, Twitter has worked, and has worked beautifully. We are training ourselves through these artificial restrictions, for good or bad, to be so very to-the-point that we often have no point to make. And, of course, we create without creating, without innovating: a video of a cat gets a funny soundtrack, then that soundtrack gets remixed into a flash game or an Iraqi missile. You might have seen that one.

That's why Laconia and other experiments are worth looking at. As we try to make sense of a life immersed in social media and viral content, and as we write and sketch and make music, we're going to be asking ourselves a lot more questions than it may seem worth asking when we're sending out that last tweet for the night. We're shaping the questions we'll be asking later.

I don't use twitter much, but even in my limited time I've seen many instances of people refusing the character limit, stretching a thought over several tweets which readers must explore backwards if they weren't paying attention from the beginning. Why? Because the human spirit is indomitable. #shyeah

Just read the Hemmingway article about babyshoes and realized character restrictions like this have been around for a while. The most famous use being Baby Shoes.