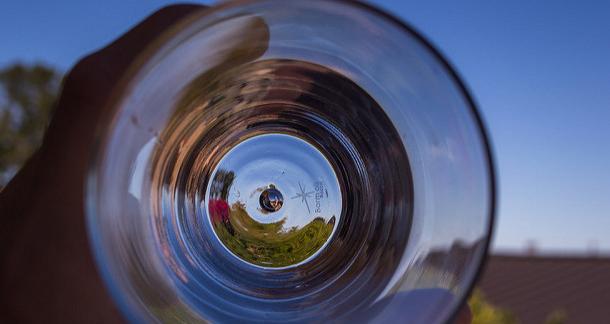 I can usually tell when a character who wears glasses is written by an author with perfect vision. For me, the world is a series of blurs and movement. Color takes on particular importance, because it's one of the only ways to distinguish between objects without corrective lenses. The way we physically see the world has a deep impact on how we express ourselves. Skilled writers perform a kind of optical illusion of the mind's eye, creating language that matches and expands upon our own life experiences.

A Mental Model of Vision

It's a tired trick in movies and cartoons: a character loses their glasses while being chased by something and has to get down on hands and knees to find them in the dark. Think of the poor bastard in The Mummy who drops his glasses and can't see or run from the undead monster right behind him, or the hundreds of other horror/suspense films that invoke the cliche of the boogeyman that's right behind you but out of sight. Personally, I'd probably risk running into a wall without my glasses instead of having my tongue ripped out, but it's an example of how a character's visual perception or lack thereof can be used to incite a particular response (in this case, anxiety, fear, or discomfort) from an audience.

Skilled writers perform a kind of optical illusion of the mind's eye, creating language that matches and expands upon our own life experiences.

The inability to see can make a character seem more vulnerable, but blindness is also commonly used as a kind of compensatory power. Think of Matthew Murdock in Daredevil, who developed heightened alternative senses after being blinded at a young age. In speaking to a crowd on blindness stereotypes in literature, President Kenneth Jernigan of the National Federation of the Blind commented on the fantastic nature of these narratives: “You and I know from firsthand experience that there is no 'fourth dimension' to blindness—no miraculous new powers awakening, no strange new perceptions, no brave new worlds to explore.”

Writers often refer to sight metaphorically; it's inevitable that we compare the external and internal ways we perceive the world. Think of H.G. Wells' "The Country of the Blind" or the symbolically blind King Lear. Because perspective is grounded in experience, we've assigned these characters experiences that resonate with our own pasts. They are only “blind” to serve a purpose for readers with sight. Crafting a “mental model of vision” is something that all authors do, but often from a narrow field of personal experience.

A popular quote on writing that's often attributed to Anton Chekhov instructs, “Don't tell me the moon is shining; show me the glint of light on broken glass.” No mention is made of who is looking at the broken glass. That makes perfect sense, of course, but it's a factor that can radically change the outcome of this seemingly simple direction. Are we looking down on a broken bottle, or laying on our side after a fight, seeing shards spread out around us? The glass may be the same, but our perception of it is easily altered.

That's where focalization theory makes its entry. Focalization is the concept that a narrative can be broken down into a series of “focus” points or characters. In other words, whose perceptions are imparted to the reader? Who is “seeing” the story? This differs from earlier treatments of perspective as a unified umbrella term. In 1972, literary theorist Gerard Genette distinguished between three different kinds of focalization: zero, internal, and external. The first describes an omniscient narrator, the second is a narrator who knows exactly as much as the character he/she is describing. The last constitutes an “objective” narrator, who says less than what the character knows. It may seem abstract, but the short clip below quickly illustrates how these areas of focus aren't just a minor side-effect of the narrative, but an integral part of the storytelling process.

Genette's theories and the debate they've ignited among scholars provide enough reading to easily fill an afternoon, or a graduate thesis. For more on focalization and perspective, check out the sources below.

Denis Diderot's Letter on the Blind says something powerful about the blind's other heightened senses. In this article here, it's said that nothing happens to the other senses. Especially coming from the President of the National Federation of the Blind, that nothing happens to the other senses is surprising. I have to be on the other side of the argument, that things do indeed happen to the other senses. Notwithstanding the possibilities of sensory deprivation, but it's an evolutionary effect of the body's awareness of itself and its environment that it must somehow resort to, or develop, other "antennae" for scoping about.

Diderot makes a great point. The seat of the soul, since Descartes, is said to be at the base of the brain only because the organ of thought is right behind the eyes. So, we associate thinking with vision. What about for the blind, though? What is "vision" for them, in the context of thinking? Diderot says, to paraphrase: the seat of the soul would be placed at the fingertips.

Now, imagine "thinking" not primarily from the brain, but as a fully embodied organism, using not just your brainpower, but the contours of the whole body...

This is a good glass material and I must say that it can also be used while doing photography. And our pictures with this frame looks fabulous. Now you must check https://cheapessayswritingservice.com/coursework-help-service website to learn more help to write their thesis. What you say? I am going to try the photography on this as a frame.