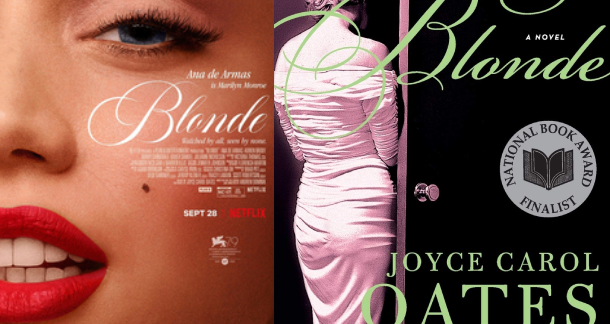 Oates' novel is a disorienting yet clarifying narrative that, through its experimentation, feels closer to truth than any mere biography could reach. Compared to Blonde, prior attempts seem like money grabs, half-truths from ambiguous friends or overlapping games of telephone-regurgitated factoids. Instead, Oates prescribes us a bitter pill to wake us from the amnesia of cultural psy-op, splaying open the psychosis of a woman versus the world; a woman working for an industry working against her. It’s a hard-boiled story of a woman’s core too soft for our times; one that leaves nothing to the imagination yet is also wildly and masterfully imagined. As she states in her Author’s Note:

Blonde is a radically distilled ‘life’ in the form of fiction, and, for all its length, synecdoche is the principle of appropriation. In the place of numerous foster homes in which the child Norma Jeane lived, for instance, Blonde explores only one, and that fictitious; in place of numerous lovers, medical crisis, abortions, suicide attempts and screen performances, Blonde explores only a selected, symbolic few.

Oates gave similar treatment to Edgar Allan Poe, Emily Dickinson, and Hemingway in her 1985 collection, Wild Nights! where she speculated on the last evenings of their lives.

“What I do, is I try to immerse myself into the personalities, imagine what they might be thinking, in some of the dialogue that of course is irretrievable—we don’t really know what these people were thinking. I always try to elevate the characters a bit,” she told Jonathan Santlofer for Blonde’s 20th Anniversary Celebration in 2020.

She dyed Blonde in a mystery formula, bookended by a paperboy delivering a newspaper to Monroe. We don’t know what the headline is until the end, when we realize the kid is an innocent symbol of Death slowly closing in on her, as if predestined. Oates uses multiple voices to narrate Monroe looking back from a posthumous dimension, imagining the novel herself. She reflects from her own unfiltered experience, privy to every secret kept from her, including every salacious and condescending thing said about her, behind her back, by those who wholly underestimated the icon.

Norma Jeane Baker was actually very intelligent. She was taking classes, different courses and lessons all her life. Other actors like Ava Gardner or Elizabeth Taylor, they had no interest in, you know, bettering themselves… Marilyn Monroe was always wanting to learn—she was always reading. So when she had a diary or a journal, it would be elevated.

There’s the obvious duality between the down-to-earth Norma Jeane and the studio-appointed name Marilyn Monroe, but what Oates really digs into is the inner-quake from these opposing hemispheres. In and out of orphanages her whole childhood, Norma Jeane had finally found a protective shield in her Monroe persona, a way to idealize herself and bask in the radiance of public adoration, to fill the void inherited from a mother suffering from mental illness and a non-existent father.

The result is a descent from vulnerability into instability. First, as her mother’s caretaker, then while divining the sub-mystery of her daddy issues by serial dating and compulsively marrying/divorcing. Yet, there’s a striking purity in her promiscuity; a genuine quest for unconditional love from one who could only give all of herself with brave sincerity.

It’s enough to re-evaluate the term “big break:” as if someone has been “broken in,” objectified and joy-ridden like an automobile to ensure their ability to “perform.”

Blonde, the film, will come with an embattled NC-17 rating that delayed its release for over a year, due to a graphic rape scene. Early in the novel Oates depicts a horrifying casting couch sexual assault by Mr. Z, a character interpretation of the founder of 20th Century Fox Darryl Zanuck (Oates won’t name anyone outright in the book). The frankness of this scene gives the book an updated vitality, demanding to be revisited as further evidence of Hollywood studios' systematic misogynist violence. With Blonde, we are not only reading the origin of Marilyn, but the genesis of corruption in the entertainment industry. It’s enough to re-evaluate the term “big break:” as if someone has been “broken in,” objectified and joy-ridden like an automobile to ensure their ability to “perform.”

While history has overlooked Marilyn's acting, Blonde also prioritizes Monroe as a studied method actor on tier with Brando, Dean, and Clift. She studied the method technique at the esteemed Actors Studio in NYC under Lee Strasberg, who's claimed the two greatest acting talents he had ever worked with were Marilyn Monroe and Marlon Brando. When she'd return to the set, she demanded to be left alone for hours in order to channel her character, tapping into her most brittle emotional reserves. While the more celebrated method actors would be applauded for similar process, Monroe would be punished as problematic, “wasting” the studio’s money, likely all on account of being a woman blazing her own trail in a male-dominated industry.

“My belief about Marilyn Monroe is that if she had only resisted returning to Hollywood, to make such an egregious movie as Let’s Make Love, but had remained in NYC in association with the Actors Studio, she might well have had a stage career as a serious mature actress; she might even be alive today,” wrote Oates in 2012.

Blonde assures the reader's consciousness becomes Norma Jeane's, so imagine being Marilyn Monroe: the most celebrated, recognizable actress in the world still searching for the personal legitimacy of a storybook romance. You get a call from The President’s Pimp to arrange a secret date with you and John F. Kennedy. Suddenly, you’re a real princess, initiated into American Royalty beyond your wildest dreams of the entertainment industry; only to have Kennedy roll you in the hay, then pass you off to his brother. You’re quickly ghosted, excommunicated from the Kennedys for your “dangerous” anti-nuke beliefs and potential to publicly leak their extra-marital affairs.

Still, she kept blind faith in the President, enough to be sewn into a dress that made her appear nude, and sing “Happy Birthday, Mr. President” for his gala at Madison Square Gardens; only to be introduced as “The Late Marilyn Monroe,” as the whole venue exploded into laughter. Knowing what we know after reading Blonde, the performance acquires a hue of dark ceremony difficult to revisit—Marilyn crooning, sultry, pouty, nearly satirical as she teeters euphoric on barbiturates in a non-disclosure agreement to herself. She would be dead two months later of acute barbiturate poisoning, reported as an intentional suicide, although fraying conspiracy hounds claim otherwise.

Oates has said she had no obligation to “facts” when writing Blonde, allowing her to take some outrageous liberties, including the book's finale that suggests Monroe’s father is Charlie Chaplin. It's a dramatic attempt to bloodline her soul-mate connection with his son, although research will reveal nothing of the sort. But Blonde isn’t the kind of historical book to scrutinize—Oates reconstructed Monroe as a deep foundation to build higher points upon, surrounded by a vast tapestry of smoke to surrender to, a spiral to fall down, full of ricocheting echo to capture.

Get Blonde by Joyce Carol Oates at Bookshop or Amazon

Get Wild Nights! by Joyce Carol Oates at Bookshop or Amazon

Storyville: Dissecting "Where Are You Going, Where Have You Been?" by Joyce Carol Oates

Grant Wamack: Of Jackboys and Gypsies