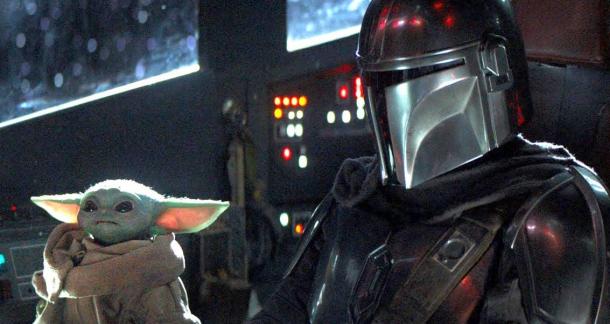 Star Wars is a place. One of my favorite fictional destinations. A vast continent of stories to discover, so expansive that it cannot be contained by over a dozen movies, hundreds of hours of television and video games, and enough books to fill a library. We have been excavating for the last forty years and have only just scratched the surface. While many are about epic struggles between good and evil, Star Wars feels like a real place because it can encompass a wide variety of stories, just like the world we live in. It’s an extremely versatile setting that can host much more than just sci-fi; I’ve seen everything from military thrillers to zombie horror in our favorite far away galaxy. My personal favorite is a novel (Scoundrels by Timothy Zahn) about Han Solo putting together a crew to pull off an Ocean’s 11 style heist that has nothing to do with the greater struggle against the Empire. Or I should say it was, because it recently got dethroned by a new favorite. The Mandalorian is a delicious fusion dish from a galaxy far far away, the best space western since Firefly. Let’s take a look at some of the ingredients.

Like many Westerns, The Mandalorian takes place in the sandblasted fringes of civilization, where the old ways and cultures haven’t died yet. A place where mercenaries of every stripe eke out a living in the shadow of a monolithic yet absent government. On rimworlds like Navarro, life is cheap, and the only law comes from the barrel of a blaster. Although the Mandalorian travels to several different planets during the course of the story, they feel more like towns along a frontier than autonomous worlds. Everywhere he goes there is a foreboding sense that the Empire is not as far away as it used to be, and “civilization” is coming for them whether they want it or not, as inevitable as the railroad.

"The Mandalorian" is grand theft homage, full of stock characters, recycled plots, borrowed icons and stolen imagery...but much like the Westerns it borrows from, that’s part of the fun.

Navarro and its neighboring worlds are populated with a colorful gallery of recognizable archetypes. Kuiil is the cranky old prospector that helps the hero along his journey, where he will encounter an eccentric tinkerer that talks to her equipment, a disillusioned soldier turned drifter, and even a shamanistic wise woman to vaguely tell him where his destiny lies. The titular Mandalorian is basically Clint Eastwood with a Star Wars paint job. Our protagonist is a mysterious man with no name, an enigmatic stranger come to a small border town to literally take names and kick ass. While a man of few words, we learn a great deal from his actions. He is a capable combatant, schooled in an ancient warrior culture, and he wears the uniform of a long-defeated army. Although he hunts men for coin, he does have a code. The Mandalorian does not kill in cold blood, sparing enemies if they are helpless or unarmed. He does not remove his helmet—he claims no living thing has seen his face since he first put it on. We also learn that he is a man of honor when he breaks his contract and becomes a fugitive from his own guild in order to protect the Child.

This wolf and cub setup is a classic premise in Westerns: you pair a seasoned badass with an innocent that needs protection in a hostile land. You can learn a lot about a place by looking at the kind of warrior it forges, and we learn a lot about this warrior by watching how he treats those that are weaker than him. Not just the Child, but also the rookie bounty hunter, the Sorgan villagers, and Kuiil—he treats them all with respect if not kindness, even if not all of them deserved it in the end. At its core, The Mandalorian is a collection of these classic Wild West scenarios arranged like a gauntlet for the protagonist to run through. There’s a heist episode, a jailbreak episode, a man vs. nature episode, even a Magnificent Seven episode. It’s not about seeing if he survives, but how. Every time he overcomes (or bounces off) an obstacle, more of his character is revealed. Through his example, we learn about the Mandalorians and their ways. It can be formulaic at times, but it’s a formula that works.

The Mandalorian is grand theft homage, full of stock characters, recycled plots, borrowed icons and stolen imagery, introducing few new concepts to the canon of Star Wars. But much like the Westerns it borrows from, that’s part of the fun. Despite its basic ingredients, the show is ultimately more than the sum of its parts, and quite enjoyable even if you’ve never watched any Star Wars. It may not be revolutionary, but The Mandalorian will show you a good time.