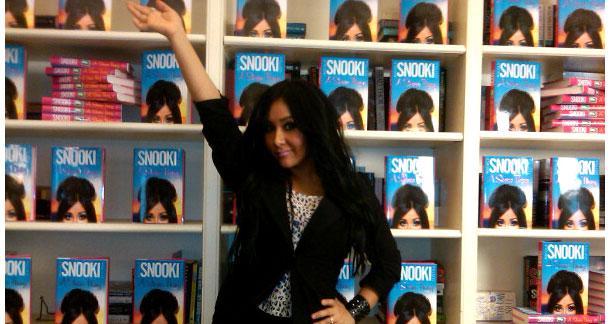 About a year ago, news broke that Jersey Shore "star" (?) Nicole "Snooki" Polizi, who is famous mostly for being short, tan, and publicly maligned, was penning a memoir entitled A Shore Thing.  This prompted a collective eye-roll among those in the writing and publishing world. Authors who had been shopping books around for years were crushed. English majors with hopes of being the next Annie Dillard retreated to their hometowns to weep and look for jobs serving coffee. How could this woman, who had been maliciously lampooned on South Park and was one of the more popular Halloween costumes of 2009 and 2010, possibly have a book deal? Is publishing really that much about the money, and that little about the content?

Apparently, it's a little of both. But mostly, it's about literary agents who build their own list of authors, hoping to net a client who is fresh and marketable. Which doesn't make it any easier for those who are desperately trying to find representation and are confronted with headlines about New York Times bestselling author Mary Jo Buttafuoco (whose claim to fame is getting shot in the face by Amy Fisher).

Every time a celebrity gets a book deal or signs with a high-profile literary agent, hundreds of unpublished, unrepresented writers die a little inside. Because while selling a book to a publisher is clearly a difficult task, for many writers, even finding a literary agent to represent them is an uphill battle. Yet celebrities of all kinds and grades--D-list reality show stars, questionable television doctors, and even convicted criminals--seem to have no problem waltzing into the publishing world, keyboards blazing, and finding a heavy-hitting agent with a star-studded roster to represent them, and get them great publishing deals and tons of press. How does that work?

Essentially, even if a talented unknown has a novel or story with some money-making mass appeal, they're still a bigger gamble than someone who comes with a built-in audience. No agent wants to get stuck pitching "quirky yet poignant" books that are sure to wind up in the bargain bin forever. But a celebrity client (or several) is often a quick step toward--if not literary street cred--income and stability in a rocky industry. Particularly when the public has already established a strong opinion about the "author", for better or for worse. This may be tough on the unknown author, but remember: publishing is just as tough an industry for agents.

Paul Constant, books editor for Seattle's The Stranger, explained to me that, for agents who want to represent celebrities, it's a slow climb toward the more notable clients.

"I think there's a certain brand of literary agent who aspires to be a famous-person literary agent, and like every other agent, they have to work their way up by scoring successful book deals for the fifth guy to get tossed out of Survivor's eighth season, or whatever, and then try to attract more famous clients," Constant recently told me in an email.

Indeed, in a world where everyone has a memoir (who can forget Late Late at Night, by Rick Springfield?), everyone, too, must have a literary agent. And while each agent is conditioned to want the next Jonathan Franzen on their roster, it may be more realistic to shoot for the next Bethenny Frankel, instead. And in the mean time? They just sort of grab whoever they can get--wherever they land on the fame spectrum--if it seems like they might be able to sell books.

Last week, it was reported that Amanda Knox, the 24-year-old who was recently acquitted of murder after a years-long legal battle in Italy, had found a literary agent to help her shop around a book about her experience. Knox, who anyone in blogging will attest is like the search engine optimization version of putting a "free beer" sign in a bar window, is one of the most clickable names online, and has been for years. Which makes it no surprise that someone--anyone, really--would want to represent her in her publishing pursuits, which are sure to be lucrative. What was surprising, however, was who she chose to represent her. His name is Robert Barnett, and among his stable of writers are Barack Obama, Sarah Palin, and Tony Blair. Ah, publishing. An industry where those accused of murder and let go after a three-ring "trial" are on equal footing with iconic politicos. An industry where regular people hardly stand a chance--because the two former categories sell books and make headlines, while the latter does neither. Even for hardened authors who have had some success in publishing, that reality is a little hard to swallow.

But not all agents are out for big names that are sure to make a splash. Plenty of others are willing to take time to discover someone new and notable who, while they certainly won't rake in the cash like Amanda Knox or Snooki (who, unfortunately for her agent, wasn't quite captivating enough to warrant purchasing a $24 book, not even as a joke), will build their industry credibility, which will help them net bigger names in the future.

Let's not forget though, that people are actually buying and reading these books. They are actually reading but they are reading junk. Maybe it's because it's an easy read or they're so devoted to stupidity but either way it's just sad.

I don't blame the agents, their like any other business man. Their job is to sell people shit if that is what they want to buy.

Joshua Chaplinsky from New York is reading a lot more during the quarantine January 16, 2012 - 12:39pm

So by that rationale, you shouldn't blame the drug dealer, because he is just giving people what they want?

I'd say that comparing a drug deal to selling a shit book isn't fair, but they both rot brain cells pretty equally so...

The drug dealer isn't stealing your shit to pay for the drugs.

I'm going to shoot Snooki in the face and then write a book about it.  Problem solved!

Dwayne from Cincinnati, Ohio (suburbs) is reading books that rotate to often to keep this updated January 16, 2012 - 10:55pm

It's 2012, times are tight. I'm not cut out for it but if you can make some money hocking bad celebrity books, more power too you.

To be fair I've seen a few reasonable people who enjoy a good read pick up some of these types of books out of train wreck factor. They are curious how things can get that messed up and hope the book will give them a bit of perspective.