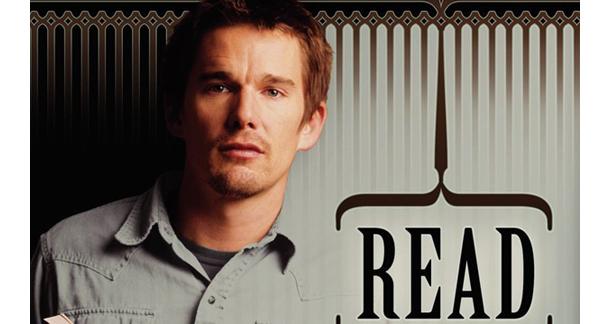 If there’s one commodity actors are not short of, it’s ego. The trouble with egos is that they’re very like the insatiable plant in Little Shop of Horrors (feed me Seymour!): demanding of constant sustenance. Acting is rarely enough for most actors. In their search for a bigger share of the spotlight, some actors turn to directing, some to music. Some even turn to art.

And some – inevitably - turn to writing.

Viggo Mortensen produces poetry of such earnest dullness that reading it is like having beige cushions thrown at your head.

Look at me! I’m a franchise!

William ‘shame is for other people’ Shatner will do pretty much anything for an audience. This includes exploiting his backlist with a ruthlessness that would make a gas frakking operation look like environmental activists.  Shatner has co-authored twenty two novels, nine based on his own special version of the Star Trek world (known to aficionados as the ‘Shatnerverse’). The other 11 are also based on Star Trek, but are called TekWars to make it less obvious.

It’s hard to upstage Shatner, but franchise exploitation is Pamela Anderson’s area of special expertise. In 2004, Anderson published her first foray into literary fiction: the simply, but persuasively named Star. Featuring a young woman – the eponymous ‘Star’ - who drags herself out of obscurity and into a part on a TV series called Lifeguards (a helpful clue there about who the book is based on), Anderson’s novel is refreshingly frank about the assets on which her/Star’s success is based. There are two of these assets. And they live on her/Star’s chest.

You think I’m being unfair? Here is a sample from the book:

"Well, well, well," [Lucille] said, rocking Pamela/Star gently. "You're not dying, you're just growing up. Looks like you're finally going to get some boobs. You're becoming a woman, honey. You're blooming!"

And bloom she did. Her breasts came on suddenly and tenaciously, as if trying to make up for lost time. The hard bump turned out to be one of a pair of unruly and self-willed nipples.

You’d almost think the nipples wrote the book. Actually, the book might have been better if they had (Tenacious breasts? Really??). That said, Ms Anderson’s business acumen is way sharper than her (or her ghost’s) writing. Star made the New York Times bestseller list, just behind that years offering from Stephen King.

Sometimes ego isn’t just about spotlight, it’s about being taken seriously. Actors like Ethan Hawke and James Franco fancy themselves as more than just pretty faces. Both are probably also convinced that it is their mastery of the written word, and not their box office appeal, that cinched their publishing deals: The Hottest State and Ash Wednesday for Hawke and Palo Alto Stories  for Franco.

But maybe I’m being too cynical. Maybe Hawke and Franco didn’t get published because of their chiseled jawlines and established fanbases. Maybe they deserve a place in our literary canon.

You be the judge:

But you gotta understand, everything in my life feels different. I just want so badly to know if you like me. And I know how asinine that sounds. (The Hottest State)

...it can be so boring being you sometimes, and if you were the most special thing like that, it could be really great, but maybe some people say the same thing about you, and you want to tell those people: 'No, you're stupid, it's no fun being me.' (Palo Alto)

Hemingway can rest easily in his grave. This is the type of English-majorish dross that should end up not just at the back of a drawer, but in a landfill.

Viggo Mortensen, who likes to tout himself as a poet, also deserves a mention here. Aragorn fans, hoping for cloaks and elves, will be very disappointed to discover that what he produces is verse of such earnest dullness that reading it feels like having beige cushions thrown at your head.

Ego-driven mania can get very strange. Postcards From the Edge made a good film, but Carrie Fisher’s brand of self-exploitation resembles turning over rocks to see what crawls away from the light. Alcoholism, overeating, pill popping, sexual misadventures. It’s all out there, legs akimbo. Billy Bob Thornton covers much the same territory with his memoir A Cave Full of Ghosts.  If Thornton is to be believed, his upbringing was a Faulkneresque rogues’ gallery of turtle-cooking uncles and FBI raids. The truth is probably a good deal less interesting, but Thornton (who did win an Oscar for the screenplay of Slingblade) has forged a career from being off-kilter and isn’t about to ruin a good thing by becoming normal now.

But ego at its weirdest comes in the form of OJ Simpson’s single foray into the world of literature. If I Did It was pulped when Rupert Murdoch took the unusual decision that making money was less important than becoming an industry pariah. Not so surprising when you learn that in it Simpson presents himself as the victim in his marriage (the poor lamb), then goes on to explain how he would have killed his wife, Nicole Brown, and her friend Ron Goldman, if someone else hadn’t done it first. In other words Simpson’s cry for attention goes like this: Look at me! I’m a murderer!

Look at me! I’m actually a writer!

It isn’t all ghostwritten tripe or angsty ramblings, though. Very occasionally, an actor’s belief that they have something to say and that the written word is the best way to say it isn’t just the product of an overactive sense of self-importance. John Lithgow writes wry, funny books for kids, David ‘Remus Lupin’ Thewlis produced a comic, if minor, riff on the art world –The Late Hector Kipling - and Hugh ‘House’ Laurie’s crime novel The Gun Seller may have moldered in remainder piles in the UK, but sold over 100,000 copies in France, where the Gallic weakness for rude Englishmen guaranteed his success.

But top prize for literary chops goes to Sam Shepard, star of The Right Stuff and most recently on-screen in Ryan Reynolds vehicle Safe House.  Shepard did a stint as playwright-in-residence at the Magic Theatre in San Francisco, his plays have been produced Off-Broadway,  and he’s a member of the American Academy of Arts and Letters. He is, in short, the real deal.

And he lived with Jessica Lange. And his band, The Holy Modal Rounders, appeared in Easy Rider. And he played banjo for Patti Smith.

Are there any actors turned writer whose work you love/hate? Let us know.

Lucas and Star Wars: Why Properties Shouldn't Continue Beyond Their Creators

I thought 'The Gun Seller' was a damn fine book, and one of the funniest I've ever read.

Mary Layton from North Carolina is reading The Wise Man's Fear by Patrick Rothfuss August 30, 2012 - 10:22am

Glad to see Hugh Laurie mentioned - I own a copy of "The Gun Seller" and loved it!  Also - his colleague, Stephen Fry, is an excellent author both of fiction and non-fiction. I quite liked Sting's memoir "Broken Music", as well. I kind of enjoyed Robert Llewellyn's "News from Gardenia", but the ending left me stabby - it didn't end so much as it just stopped.  I loved Kenneth Branagh's early biography "Beginning".

Steve Martin deserves to be on the list of "real deal" writers.

Martin is also a skilled musician.

Franco's fiction is absolutely terrible. His is possibly the dullest prose I've ever encountered. The man has no flair for language. Plus, none of his characters are likeable or even interesting, and they never seem to do much.

I actually enjoy Carrie Fisher's writing... But anyway, what really made me lose all faith in humanity was when I found out that the orange-utans from Jersey Shore got book deals. They're not even actors, just sideshow freaks with Hollywood sized egos!

Nick Cave might be bending the rules a bit, but hey, if Pamela Anderson counts as an actress, Nick damn sure does.  And the Ass Saw the Angel, while somewhat dense, is amazing.

JEFFREY GRANT BARR from Central OR is reading Nothing but fucking Shakespeare, for the rest of my life August 30, 2012 - 12:27pm

I second the recommendation for Stephen Fry, who writes some truly enjoyable books:

Making History, The Hippopotamus, and Revenge. I haven't gotten to any of his other books yet, but I suspect they will be quality.

Also, Laurie's The Gun Seller was surprisingly good, and reminiscent of Douglas Adams.

Jeff, I'm with you. I really enjoy Stephen Fry's writing.

Ethan Hawke, on the other hand, is awful! I'll never get back the time I wasted reading The Hottest State, and it still upsets me.

I respect writers that actually write, rather than writers that write about other people's writing...actors or not.

Yes! Shopgirl is one of my favorite books and one I read at least once a year. His writing is sweet and wry, and I quite prefer it to his (lately, not so great) acting.

I haven't read any of the books mentioned in the article, but I'm with the others who mentioned Steve Martin. Grabbed a copy of Shopgirl while I was in London and loved it. Haven't had a chance to read his other works of fiction, but am planning to in the future.

I've heard that Chris Colfer's books are good, but never cared to check them out. One of my friends read the first book and raved about it.

A lot of actors seem to be using ghost writers lately. Even Hilary Duff has a book on the market, penned by a ghost writer. I actually have a copy of it, because I got it for $2 at Borders. Haven't cracked the cover and probably won't. I'll end up adding it to my classroom library. But who knows, it might be good. Depends on the skill of the ghost writer :-)

Michael Palin's book Hemingway's Chair is not bad. Although, I read it a long time ago, so maybe I'm not remembering correctly. And Shepard is definitely the real deal. True West and Buried Child are incredible plays. He might be more of a writer turned actor. For good viewing, look up True West starring a young Gary Sinese and a young John Malkovich.

Courtney from the Midwest is reading Monkey: A Journey to the West and a thousand college textbooks August 31, 2012 - 11:21am

Yes! It was Bea Arthur.

And among the other reality-show-demi-stars who have churned out crap ghostwritten fiction, don't forget The Hills' Lauren Conrad and her books about...being young in West Hollywood. I watched Laguna Beach. I watched The Hills. I hated myself. I tried to read her first book, and hated myself more, though not likely as much as I would have had I finished it.