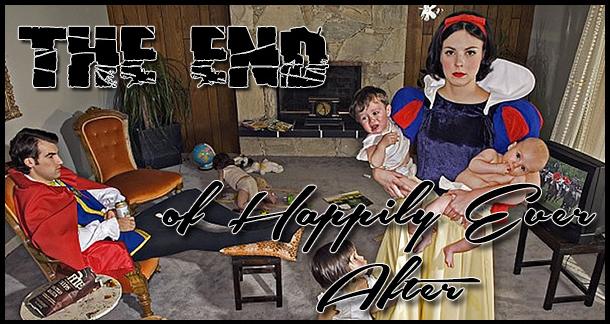 Once upon a time our stories ended in happily ever after. Dragons were slain, damsels rescued, glass slippers found, and eternal bliss achieved—usually thanks to a combination of wealth and marriage. Things have changed. While "happily ever after" holds on in a variety of forms, audience expectations have shifted. Readers not only accept but often prefer endings that aren't entirely happy. Why, as readers and writers in the 21st century, do we shy away from the old expectations of eternal happiness?

Hollywood vs the Unhappy Ending

***I'm talking about endings, so it should go without saying that spoilers will abound. Read on at your own risk.***

To say we no longer have "happily ever after" would be misleading. Some markets want that happy ending. Some genres demand it. Hollywood has certainly gone to great lengths to provide happy endings in the bulk of its stories; even books written with a mixed or unhappy ending often find a new conclusion in the film rendition.

Perhaps the best example comes from The Princess Bride, where the film gives us a concretely happy ending and the book gives us a happy ending only to tell us that's not how it really happened:

"And they lived happily ever after," my father said. [...] The truth was, my father was fibbing.

Goldman then goes on to show how the book actually ended:

From behind them suddenly, closer than they had imagined, they could hear the roar of Humperdinck: 'Stop them! Cut them off!' They were, admittedly, startled, but there was no reason for worry: they were on the fastest horses in the kingdom, and the lead was already theirs. However, this was before Inigo's wound reopened, and Westley relapsed again, and Fezzik took the wrong turn, and Buttercup's horse threw a shoe. And the night behind them was filled with the crescendoing sound of pursuit...

The full ending of The Princess Bride is worth reviewing. It makes some great commentary on the inevitability of death and other factors that make "ever after" a bit difficult.

Other white-washed endings of note include the Hollywood renditions of Chuck Palahniuk's work. Palahniuk's Fight Club leaves Tyler Durden in an asylum; Hollywood's Fight Club leaves him holding Marla's hand and watching the pretty explosions. In one of my favorite endings of all time, Palahniuk's Choke leaves the characters to pick up the remnants of their lives in "the middle of nowhere in the middle of the night"; Hollywood's Choke tells us that Victor has overcome his sex addiction and is in a positive, adventurous relationship with Paige. Paige has been transformed from a troubled, complex woman into a manic pixie dream girl.

Literature is more comfortable navigating into the uncomfortable territory of not-so-happily, and many stories actively attack or reverse the expectation of a happy conclusion. One of my favorite subversions of "happily ever after" is in Eugene O'Neil's classic Long Day's Journey into Night. In that play, the audience is left to wonder what led the characters to this broken family situation, and are given a beautiful explanation in the play's final monologue. Mary (the mother) comes downstairs, wearing her wedding dress, rambling on thanks to a morphine-induced delusion. She talks about how romantic and wonderful her relationship with James (the father) once was. Then she delivers the haunting final line:

So while some genres have continued to give a "happily ever after" ending, the core of the literary canon has turned away sharply and most writers and readers have at least edged away from blanket conclusions. But while the examples above show this shift, they don't explain why that shift happened. Here's my take on why post-modern readers have shunned happy endings.

Unless you define it by "the last printed page," it can be hard to put exact definitions on what makes an ending an ending. "Happily ever after" does a favor for audiences: It affirms that the story has reached its conclusion. There was a major conflict, it's been resolved, and these characters never had a major conflict again.

For modern writers and readers, the first problem with "happily ever after" is found in how unrealistic that notion is. True, the singular shaping experience gives a pleasant form: It concretely defines how a person can become a "real adult" or "happy person." Sadly, that's not how life works.

But then again, "real life" doesn't have elves, lightsabers, supervillains, or talking cats either, yet readers seem okay with suspending their disbelief for these elements. Why would the "ever after" be the place readers draw a line? Why give up the catharsis of the microcosmic struggle and eternal reward? Honestly, I think Chuck put it well:

"We've all been raised on television to believe that one day we'd all be millionaires, and movie gods, and rock stars. But we won't. And we're slowly learning that fact. And we're very, very pissed off."

"Happily ever after" pitches us a version of reality that is pleasant but ultimately treacherous. We could just enjoy the vicarious happiness, but something else comes into play: Having been raised in the age of television ads and post-modern deconstruction, we're automatically suspicious of any claim. We live by Goldman's credo: "Life is pain, highness. Anyone who says differently is selling something."

We may want to be happy, but there's something we want even more—and getting rid of "happily ever after" gives us a chance to have that greater desire fulfilled.

That we expect to be lied to is significant, but equally significant is the world created when everyone is suspicious of everyone else: We have purchased a new brand of isolation. We're lonely and disconnected; all statements are suspect, all people are trying to make a sale, and when someone says "I love you," the first instinct is to make them cite their sources.

Am I the only one this jaded? I don't think so. While David Foster Wallace discussed loneliness and authenticity in several of the essays found in Consider the Lobster, the most significant was his discussion of John McCain in "Up, Simba: Seven Days on the Trail of an Anticandidate." In discussing the basis of McCain's campaign, DFW notes that voters are so ...

thankful for a presidential candidate somewhat in the ballpark of a real human being that it has to make you stop and think about how starved voters are for just some minimal level of genuineness[.]

This craving for authenticity extends beyond politics. Who we are, what we care about, what makes us happy all plays into the giant commercial of modern living. As writers, it can sometimes feel there's no escape. Even work like Fight Club becomes its own product as it lashes out against consumerism. Really, I want you to trust my authenticity in this article, and I hope we can both appreciate the irony as I provide a sales link to each of the main works I've discussed. Is there a way around it? I don't know, but it's where we're at: commercialized loneliness is a pervasive and unspoken part of modern life.

Stories meant for escapism tend to stick to a "good guy wins" outcome; this sort of pop fiction is meant for those who want to evade the emptiness. But the unhappy ending is trying to fill rather than avoid that emptiness. This task requires looking straight into the void. The unhappy ending also provides a sense of honesty and connection with readers. To acknowledge the unspoken pain of the reader and bear witness to the shallow isolation of mainstream life lets readers know they are not alone.

So why give readers another happy ending to write off as a sales pitch? This is the 21st century: We may be hungry for joy, but we are starving for that morsel of authentic human connection.

eirikodin from Auburn, NY is reading Mediterranean Caper by Clive Cussler May 2, 2013 - 1:50pm

I'm not one to write happy endings myself although I do like to think I write satisfying endings.

I'm not sure I completely agree with Rob's thesis, at least for the reading population as a whole. Sure, there are among us the Literati, who appreciate an unhappy ending. However, the mass market of happy endings out there, and the attendant sales of the books that contain them, I think, speaks to number of readers who want happy endings.

For my part, I'm pleased when an author, if necessary, can bring him or herself to kill off an important or beloved character (J.K. Rowling, I'm looking at you here). But, even Rowling couldn't stave off the happy ending.

Maybe I'm comparing apples to oranges here. And, who's to say that Palahniuk's ending isn't happy, for Durden, much the same way that the protagonist of Camus' The Stranger wants the guillotine?

Good article.  My vote is for the satisfying ending over the happy ending.

I would guess that the number of readers who "want" a happy ending is not representative of the number of readers who will accept an unhappy ending if it is satisfying. I say this because the unhappy or mixed ending is accepted in mainstream fiction and completely rejected in mainstream film. Even Dodgeball was supposed to have an unhappy ending, but when it tested poorly with audiences, they went over the top and gave it the most ridiculously happy ending ever. They lose, BUT they get a ton of money! Vince Vaughn gets the girl AND her girlfriend! The villain is ruined! SO HAPPY!!!!!!ONE!!!11

So, happy endings are fantasy, and a more realistic ending is acceptable because it doesnt seem like a sales pitch.

What if it were the other way around though? What if now we're so conditioned to suspect our own feelings of happiness that we cheat ourselves of what could be a real-life happy ending?