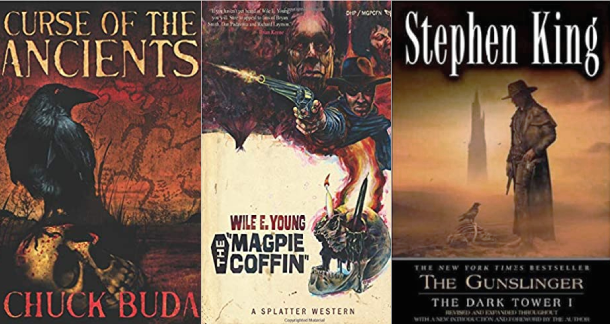 When I was a kid, my dad loved westerns. He read Louis L’Amour books until he needed entire shelves just for that author. On Saturday afternoons, much to my chagrin, he would take over the TV and binge the old westerns, many in black and white, on the few channels we had. As a kid, I couldn’t really relate at all. Kids born in the 1970s often had fathers born in the 40s and 50s who grew up on a heavy diet of westerns that became deep-set nostalgia by the 80s. My father was fascinated by crime fiction, science fiction, high fantasy, and to a lesser degree, horror too. But westerns were at his core. My father may not have recognized a splatter western as being kin to the things he loved, but I don’t know that for a fact. He had a surprising taste for the macabre at times.

As I became an author, I wasn’t prepared to write a straight western, but I did experiment with cross genre westerns. Steampunk was a big part of my early short story career and western elements fit nicely in that genre. I also started to read and enjoy the Longmire books ,and watched the complete series once it came out, first on network TV and then on Netflix for the final few seasons.

Weird western has been a long-running, long-suffering, much maligned subgenre of weird fiction.

Weird western has been a long-running, long-suffering, much maligned subgenre of weird fiction. Herein authors explore western tropes across the distant wastelands bordering the bizarre. It may have the smallest of niche audiences for a category of writing that has survived this long. Weird westerns might also be one of the biggest arguments for why cross genre westerns aren’t the safest financial decision in publishing.

The Dark Tower series by Stephen King kicked off with The Gunslinger in the early 80s when western nostalgia would have been high for men born at the time of my father and Stephen King. Judging from King’s work and interviews, I’m led to believe his interests in genres were aligned closely with my father’s reading. The Dark Tower may be more western fantasy, with the gunslingers being pistol-wielding knights or even samurais. Still, the cowboy/knight hero crosses blasted wastelands of legit magic and ancient advanced technology, and there is a heaping share of splatter throughout the series.

Other recent indie authors have dabbled in westerns or are considering doing so. Chuck Buda’s Son of Earp series, beginning with Curse of the Ancients, may be one of my favorites in the broad category of cross genre westerns. It is sort of Supernatural meets the Wild West. Buda does an amazing job of capturing everything there is to love about a masterfully written western while weaving in supernatural and horror elements.

Brian Keene has been talking for a while about writing a straight western with nothing supernatural involved. He even shared his detailed book pitch on his Patreon page a while back, and it was really good with great action and a compelling story. I will read it if and when he publishes it.

Death’s Head Press has started a series of standalone novels by different authors they are calling Splatter Western. This is not a completely new concept. Westerns in recent years and less recent years have pushed further into bloody territory for the more daring readers. The Bloody Spur, The Bloody Trail, Bloody Hills, and A Bloody, Bloody Mess are a few titles among many that make the bloody point. Death’s Head Press, however, has galvanized the concept in a clear way that really is next level.

Something New in All This Bloody, Bloody Mess

This article exists because of The Magpie Coffin by Wile E. Young, the first book in Death’s Head Press’s Splatter Western series. This is a great novel from an author demonstrating his skills as a storyteller early in his publishing career. It leans into the genre of Wild West shoot-em-ups and the unflinching and bombastic style of really well-written extreme horror and splatterpunk. It is a great western, a great supernatural novel, and great horror. Wile E. Young creates characters that have dimensions in a world with grit, dripping in style.

The second book in the series is Hunger on the Chisholm Trail by M. Ennenbach. It is well-written and continues the spirit of the series with this author’s unique story and style.

The recently released third novel is Dust by Chris Miller. I still need to read this one, but I’m looking forward to it. Judging by cover and description, Dust appears to lean heavily into Lovecraftian horror, which would again differentiate it from the previous two.

The covers on these first three Splatter Western books are splattery, western “paperback from hell” beauties. They capture chaos and horror in the scenes, images, and colors while fitting together in a way that tells you these books are all part of the same new thing that just might be awesome.

Wile E. Young recently announced a sequel to The Magpie Coffin in the works called A Few Souls More. Kristopher Triana, a Splatterpunk Award winning author, announced he’s working on a western. My understanding is that it’s part of Death’s Head Press’s Splatter Western series and I’m sure it will be brutal and splattery when he’s done with it.

I can’t imagine that more horror authors wouldn’t follow suit with this trend. I may be feeling the itch of that infection myself, though I’m trying to fight it. As with all things that start to get some heat in writing, some of the coming work will be good and much of it may achieve less than the examples I’ve already mentioned. All I know is that I’m hooked into this splatter western thing as a reader. I’m going to see what comes from these authors, whether it is the good, the bad, or the bloody ugly. There is something going on here and I like what I’m seeing so far.

Buy The Gunslinger by Stephen King at Bookshop or Amazon

Buy Curse of the Ancients: Book 1 of the Son of Earp series at Bookshop or Amazon

In the 1950s and 60s, violence was everywhere. Movies and television showed serial killers stalk innocent victims. Cinematic Westerns were replete with death and gore; even the sound effects were often pitched in a ghastly high register that set the mood. New technology is making new ways of being bizarre popular again. To help people who miss a certain era, the New Nostalgia of Splatter Westerns has been created. Currently, I am exploring https://fasterskier.com/2020/08/how-to-choose-a-cross-country-ski-school-for-students-in-the-uk/ source to find the best cross country ski school for students in the UK. After reaching the UK, I will personally visit all of my favorite locations which I earlier saw in different western movies.

I am more than happy to see this kind of stuff which you've shared beautifully.