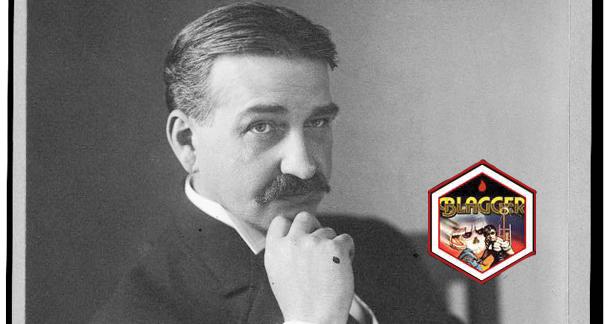 Lyman Frank Baum was born in 1856, the seventh of nine children, to a prosperous business-man father. The family fortune came from Pennsylvania oil. Young Frank grew up with his four brothers and sisters (sadly not all of his siblings survived infancy) on an idyllic estate named Rose Lawn. He suffered from a mild heart condition as a child, but that didn’t stop his parents from sending him to military school at the age of twelve. He lasted two years, wangling his way back home by the time he reached fourteen. He was privately educated from then on.

Doesn’t sound like money was much of a problem

It wasn’t. Baum spent his young adulthood being bankrolled by his Pop in a variety of careers. He tried his hand at storekeeping (failed because he gave away most of his goods on credit and was too softhearted to collect). He raised competition-level chickens (successful but there was no money in it). He became a theatre director, writing and starring in his own plays, but even though his father donated a chain of theatres to his son, Baum still failed to make a go of it as a stage impresario.

To be fair, this last disaster wasn’t entirely Baum’s fault. One of his theatres was burned to the ground in a major fire and this plus bookkeeping irregularities meant that Baum was forced to sell the whole chain to settle his debts. From there, things got worse. His father died. The family business declined. With a young family to support, Baum worked his way down from newspaper owner to travelling salesman, ending up as a shop dresser in Chicago by the time he was 41.

A riches to rags story then?

You could say that, but through it all, Baum never lost his optimism, or enthusiastic urge to attempt yet another career. His mother-in-law suggested he should write down the bedtime stories he told his four sons and, undaunted by a lifetime of failure, Baum did just that, approaching a contact made during his journalist days with his prose version of the traditional Mother Goose tales.

And then it was Yay! Success finally!

Sort of. The catchily titled Mother Goose in Prose made it into print and sold reasonably if not spectacularly well. Baum bumbled onwards, giving up his job as a salesman for health reasons and turning to yet another venture, this time a trade magazine on window dressing. At the same time, he prepared a follow-up to his children’s book, only this time called Father Goose and with illustrations by Baum’s friend, William Denslow.

And then it was Yay! Success!!

You got it. As yet more proof that no one can predict what will make a best seller, Father Goose  proved to be the Harry Potter of 1899. The first printing sold out in three weeks and shifted over 100,000 copies within its first few months on the shelves. After acting, chicken farming, store ownership, journalism, travelling sales and window dressing had all failed for Baum, nursery rhymes turned up trumps. Not a stupid guy, he rolled up his sleeves and started work on a third children’s book, this time tentatively called…

You’re getting good at this. The working title for Baum’s new book was The Emerald City. He changed it just before publication to The Wonderful Wizard of Oz. He had the retitled work ready before the end of 1899 and rushed it to his publisher…

Who embraced it with open arms…

…who turned it down. They wanted more nursery rhymes, not a story about a magical land full of singing dwarves. They suggested that if Baum was so convinced his new idea was a best seller, he publish it himself and see how it sold.

Wait. The Wizard of Oz  was SELF PUBLISHED?

You read it here. Baum did just that. He, Denslow and their wives put the Father Goose royalties into the new book. Then they crossed their fingers and waited, hoping that Baum’s spectacular ability to snatch disaster from the jaws of triumph had finally played out.

And they were vindicated. Oz laid even more golden eggs than Father Goose (if that were anatomically possible), becoming one of the bestselling children’s books ever. Baum was set for life. He became a writer full time, adding a further 13 books to the Oz series over the following 20 years, interspersing these with other children’s stories. He also wrote under a number of pseudonyms, most notably a series of Little-Womenish novels as Edith Van Dyne. But the lure of the stage continued to exercise its power over Baum. By 1902, he had produced a stage version of Oz and heartened by the success of this, he went on to attempt the same with Oz’s  follow up: The Magical Land of Oz. But see if you can guess what happened…

Spectacularly, as did several further stage ventures. By 1911, Baum was yet again forced to declare himself bankrupt. By now an expert at insolvency, he had transferred most of his assets (including his typewriter) into his wife Maud’s name, so the bailiffs couldn’t seize them.

She must have been a patient woman

She was. Frank and Maud were married for 35 years. On his deathbed he told her that she had been the only woman he had ever loved. He died on 6 May 1919 at the age of 63. Maud managed his estate after her husband’s death, selling the film rights to The Wonderful Wizard of Oz  for $40,000, a considerable sum at the time. Somehow, she managed never to go bankrupt.

But what about the film? Is it faithful to Baum’s book?

Pretty much. Some of Dorothy’s adventures with her three chums are omitted, but the 1939 MGM adaptation follows the book’s storyline fairly closely. For blagging purposes the one fact you need to know is this: in the book the iconic ruby slippers which Judy Garland wears in the film are silver shoes instead.

And finally, the Blag Facts!

Lit reaction has a column which includes a magazine. They have such guidance of the Blagger's to L Frank Baum. He stops his parents from sending him to military school at the age of twelve. You can check here https://portugalgoldenvisass.com/4-preferrable-investment-options-for-portugal-golden-visa/ to know how to get Portugal Golden Visa. You can make political views and their 12 presented steps. Join their website for more techniques.