The Blagger's Guide to Franz Kafka 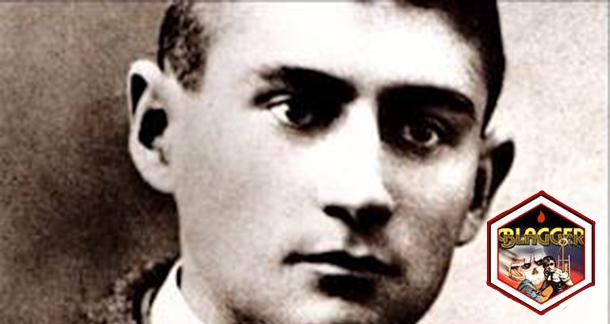 Franz Kafka was born on 3 July 1883 in Prague, to a wealthy middle-class family of German-speaking Jews. This distinction is important, because at that time Prague formed part of Austro-Hungary and was split between a bourgeoisie of German extraction and a largely working class Czech population.

Wait, so you’re saying Kafka was a toff? I thought he lived in a garret and starved for his art

Not he. Kafka’s father owned a clothing store in the city and Franz lived at home with his parents until he was 31. But Kafka’s image and the facts part company all the time, so don’t feel bad about it.

Because Kafka was thoroughly ordinary but his work isn’t. People read into the author what they see in the novels. Also, Kafka was a terrible self-dramatizer. He raged about his father being a tyrant, yet as noted, stayed at home with Mum and Dad until adulthood. He complained about his job in an insurance company stifling his creativity, yet worked enthusiastically enough to be promoted several times and only resigned when forced to by ill-health. He claimed his writing was foremost in his life, yet became partners in an asbestos factory with his brother-in-law and put a substantial amount of time and effort into making that work.

Oh he was a typical writer then – always complaining about not having any time to write, but somehow finding plenty of time to do the complaining

Exactly. Just as well Twitter and FB didn’t exist in Kafka’s day because he would have spent his whole time tweeting about how he should be writing instead (does that sound familiar?). Instead he did the 19th century equivalent of Facebooking and wrote letters and diaries when he should have been concentrating on his fiction. His complicated love life didn’t make matters any better…

The facts are well covered elsewhere, but basically he was a bit of a ladies’ man. A regular visitor to the local bordello, Kafka had several serious relationships too, proposing marriage not once but twice to his first girlfriend Felice Bauer yet managing to wriggle out of both engagements before there was any danger of actually having to walk down the aisle. Being Kafka he wrote Felice loads of letters – you can imagine his phone bills if texting had been around.

While dating Felice, Kafka had an affair with her friend Marguerite Bloch, who is claimed to have had his son, but that relationship did not last. He then became engaged to Julie Wohryzek, a chambermaid, but—guess what?—never went through with the marriage. During that engagement he began a relationship with journalist Milena Jesenská who seems to have actually been the love of his life. There was one catch—she was married to someone else. Darn it. He couldn’t marry her either.

Kafka remained single until he died of TB at the age of 39.

So apart from leaving a trail of broken hearts across Middle Europe, what was his legacy?

Three novels (none completed) and a quantity of stories, published in the literary magazines of the day and some also as collections.

Wait—he never completed a novel? How come he’s so famous?

Because one of those novels was The Trial about Josef K, who is subjected to a judicial process for an unspecified crime and one of the stories was Metamorphosis which concerns the ordeal of Gregor Samsa, a travelling salesman who wakes up one morning to discover he has been transformed into a cockroach. As you do.

Both of these works have become accepted classics and the reason why owes a great deal to subsequent events. Kafka was not obscure or ignored in his day—his work was published, reviewed and praised.

He died in 1924 and only a decade later the politics of Europe began their descent into racism and madness. Kafka’s work, which he probably intended as absurdism (reading The Trial out loud reduced him to howls of laughter) suddenly seemed weirdly prescient when set against the horrors of the camps and Stalin’s showtrials.

There’s no evidence for any kind of political intent in Kafka’s work. The Trial seems to have been inspired by a confrontation between Kafka and Felice Bauer’s family, who were becoming quite naturally pissed off by Franz’s refusal to make an honest woman of his girlfriend. Because of Kafka’s Jewish ancestry, Metamorphosis is generally thought to be a commentary on anti-semitism, but even though all three of Kafka’s sisters and many of his friends perished in the camps, at the time he was writing, the Czech working classes were firmly the underdogs in his social milieu and the concept of Untermensch no more than a twinkle in Hitler’s eye. It’s more likely that Kafka had read Freud and came to the story as an expression of his conflicted emotions about his own sexual urges (yes, he wrote a scad of letters on that subject too).

However, in the post war years and interpreted through the telescope of history, these books became transformed into a solemn commentary on Things to Come. Kafka became a literary superstar, identified as an influence on luminaries such as Camus, Sartre and Ray Bradbury.

But surely there’s more to Kafka’s fame than that…

It’s fair to say that Kafka was a groundbreaker and that his stories are probably (pace Beckett) the most perfectly realized examples of absurdist literature. They deserve their place on the shelf with the greats.

The other factors that keep the flame of curiosity burning are the vast legacy of letters and diaries he left behind. He wanted them all destroyed but his friend and literary executor Max Brod kept them intact and they have formed the basis of a huge Kafka industry, with a new biography hitting the presses every few years. Added to this is the tantalizing mystery of what happened to the papers Kafka gave to his final girlfriend Dora Diamant. She also failed to carry out his request to destroy these letters and notebooks, but what she kept was confiscated by the Gestapo during the war. They have never been rediscovered.

Kafka is the 39th most translated writer ever.

Kafka revealed in one of his many diaries that aged 19 he posed nude as an artist’s model. The subject was St. Sebastian, with an arrow covered Franz as the martyr.

They even wrote a rock opera about him.

'The trail' is the best book i have read in ages! It also made me a little more crazy as I already was... :)

Can somebody tip me a book or story from another writer which covers the same matter in a way?