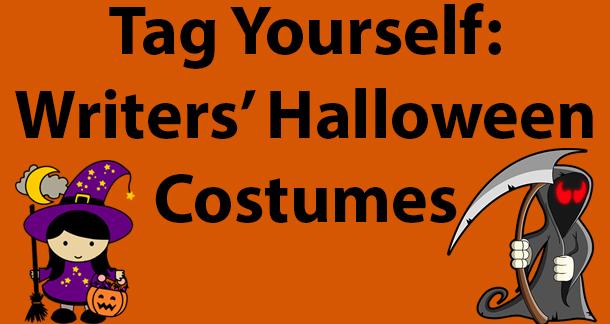 It’s Halloween night. You’re a writer. You have an event to go to. Whether it’s critique group, a conference, a retreat, or (gasp) an actual party, chances are you’re gonna see some dweebs in costumes. Who do you see?

Literary characters aside (hi, Frankenstein’s monster and Pennywise), there are always the classics. A pirate, ghost, witch, vampire, scarecrow, grim reaper, ballerina, and devil. You know the types. Which one are you? 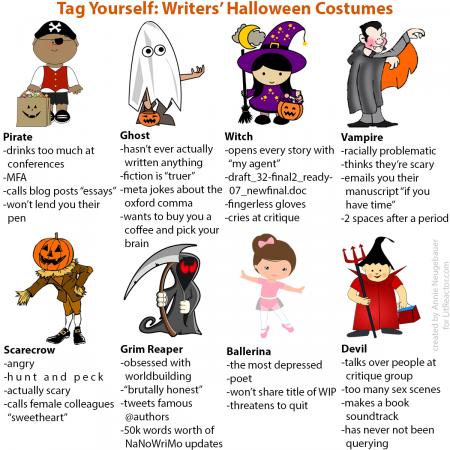 (In the spirit of the ‘tag yourself’ meme, feel free to save and share the graphic above on your favorite social media so you and your friends can tag yourselves. Just don’t blame me if you get called out as the scarecrow. It’d be nice if you also tag @AnnieNeugebauer and @LitReactor with your post.)

Still can’t decide which you are? Here’s a few more hints about this monster mash:

The pirate has literally written a nested flashback before. They’re married to another writer. They’re “too busy” for whatever favor you need to ask.

The ghost has maxed out their interlibrary loan requests. They’re disdainful of self publishing. They want to move to NYC.

The witch refuses to give negative critique. They own a literary text piece of clothing, probably a scarf. They never learned editing symbols.

The vampire always carries a physical book. They go on yearly writing retreats. They don’t get it.

The scarecrow unironically owns a typewriter. They can’t remember “whatever the P.C. term for it is right now.” They pitch people who aren’t in the industry.

The grim reaper is always in the brainstorming phase. They brood. They’re too good to shop at Barnes & Noble.

The ballerina never gets work done because they’re too generous with their time. They love #bookstagram. Their handwriting looks like a font.

The devil thinks research is the best part of writing a novel. Their stories are actually lol funny. They’ve seen some shit.

Now you get it. (Unless you’re the vampire.) So which costume are you rocking this year?