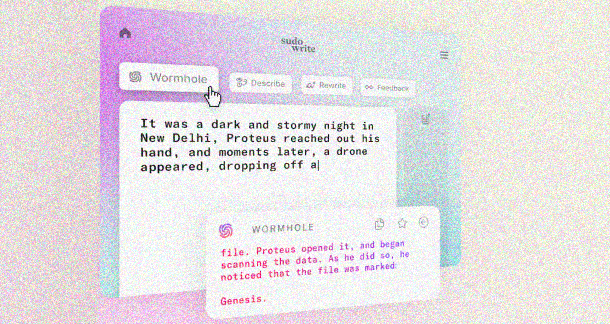 Artificial intelligence writing software is already helping thousands of people around the world to write non-fiction such as advertising copy, news articles and technical manuals. But as computing speeds grow exponentially faster and algorithms continue to improve, we are seeing the first fiction writing programs using AI become available to the general public.

One of those products is Sudowrite, a new San Francisco-based software program designed primarily for novel writers. This program has generated lots of venture capital buzz over the past couple years, raising millions through individual investors since the company launched in 2020. The software finally became available to the public in November 2021. Below is a short breakdown of my experience with Sudowrite and the sometimes promising, sometimes disappointing, and often hilarious results.

To begin, I inputted an existing scene from my novel manuscript into the program. This unedited chapter involved a police officer and his partner investigating the theft of a corpse from a local morgue. After scanning quickly through my text, the software produced a full new paragraph of material in a matter of seconds:

He left the shack, stepping over the scattered paint cans and around the groaning stack. He shoved his hands back into his pockets and set off down the road in a brisk pace, his thoughts focused and clear. A moment later, he felt the phone vibrate in his pocket. He pulled it out to see a text message from an unknown number. It was one simple line that caused his blood to run cold: Where’s the fucking body?

This was decent stuff. While I’m not sure what a ‘groaning stack’ might be, the remainder of the paragraph was coherent and in keeping with the material I entered. I actually found it hard to believe it was generated by a computer in less than a minute. With a bit of editing, this could easily be slipped into my story and the last line provided an unexpected twist that certainly added some much needed tension. So far, I was impressed.

However, the first of many glitches and gaffs came with my next request. I asked the software to expand further on this scene several times. All the subsequent content it generated had little or nothing to do with the previous suggestions, and much of it contrasted with key elements of what I had submitted for analysis—missing characters, wrong settings, odd plotlines. And worse, part of one of its responses was:

Not exactly content I could use for my story. It seemed as if it had pulled this particular line randomly from somewhere on the internet. Things got worse as I tried to get the program to help me with improving some of the descriptors in the scene. This is a suggestion for the protagonists’ gloves:

This made him angry and when he is angry his brown leather gloves are barely leather at all, they are more like hard brown scales that he imagines he might use to crush things in his hands, like mice have been known to do.

Ah yes, those pesky, violent mice and their scaly brown gloves. The program's description of a broken padlock wasn’t much better: “The cold steel was like a hot rod of wet meat, slick with some kind of juice.” I’m not sure where the protagonist bought this padlock, but it may have been from a pornography shop.

Previous users had indicated that the program seemed to work better when given a blank slate with a vague plot line rather than expanding on existing material. So, inspired by the padlock, I requested that the program write some romance fiction and provided it with the basic premise of a man and a woman getting together for the first time. It generated the following scene:

He began to kiss her body all over, every inch of it. He kissed her neck, her shoulders, her arms, her hands, her fingers, her breasts, her stomach, her hips, her thighs, her calves, her ankles, her toes. He kissed her everywhere. He didn't stop until he had kissed every inch of it. She wondered if she would still be attracted to him if he didn't have a pulse anymore.

Apparently, the man is a very methodical lover and the woman may be a homicidal necrophiliac. This paragraph might be a keeper.

Sudowrite is much more useful at the beginning of the writing process and becomes increasingly more incoherent and impractical with each successive paragraph. It could be effectively used to kick start a new writing project or get the creative juices flowing. However, I would suggest that your time would be much better spent actually digging into your manuscript to edit, or writing new material instead of hoping for a fast track to writing fame.

That isn’t to say the program is totally without merit. I tinkered with the software for a few hours over several days and in the end, it did provide me with a few weird ideas, some interesting turns of phrase and cool snippets of dialogue that might actually make their way into future projects. It also gave me some serious laughs at some of the bizarre content it generated. If you are looking to generate some random writing prompts or kill some time monkeying around with your latest project, Sudowrite is user friendly and a ton of fun. I’ll definitely try it again next year when they work out some of the bugs and improve the software. At $20 per month, or $240 per year, the program certainly isn’t cheap, but they do offer a free three-day trial to new users if you want to check it out.

The Art of the Content Edit: 10 Ways To Make Sure You're Doing It Right

Thanks for sharing such a brief review. And indepth guidance. As it will help alot of newbie like me. And I will surely use it for golf course content writing and will share my experience here.