So, you’re thinking about getting yourself a pseudonym, huh? I think of a scene in one of my favorite animated films, Rango, when Beans asks Rango who he is, really:

Well I’m a man of many epithets. There’s my stage name, my pen name, my avatar. Had a pseudonym once…and I’m actually one of the few men with a maiden name!

Ah, Rango. You crack me up. But seriously, there are some good reasons (and some bad reasons) to create a pseudonym. Let’s talk about them and sort this out together.

In the introduction to my novel, "Breaker", I thanked my mother for her support and then BEGGED her to please put the book down and stop reading.

You might not lean into extremes like erotica or brutal horror, but maybe you work in an industry—teaching, politics, your local church—where you don’t want people reading your speculative fiction or your gritty thrillers. That also makes sense. I can see wanting to keep your day job and writing career separate from one other. There are a lot of judgmental people out there, and they may not have your best interests at heart.

Another thing I’ve seen over the years is women taking a pseudonym in order to avoid gender bias. It's a real concern, sadly. There are still quite a few editors out there (usually straight white men) who feel that women can’t write “X” genre—be it horror or science fiction or crime. It’s part of the reason I decided to put together the anthology, The Lineup: 20 Provocative Women Writers. Of course women can write in any genre. J.D. Robb is actually Nora Roberts, George Eliot (Middlemarch) is Mary Ann Evans, James Tiptree is Alice Bradley Sheldon. Many contemporary female authors use initials, as well—N.K. Jemisin, S.E. Hinton, A.C Wise. This is a very personal decision, but it is totally valid to create a gender-neutral pen name (Chris, Alex, Tyler, etc.) or use initials.

There may be other reasons you want to change your name or create a pen name, other biases to avoid—not just gender, but culture, nationality, religion, orientation, you name it. Sometimes you might want to use a pen name to keep your work in separate lanes of the highway, and other times to try and get an unbiased response to your submission. It’s a shame that we still have to do this.

YOU MAY BE CHANGING

You may no longer be the same person. Perhaps you are getting married and want to either keep your maiden name or change it to your married name. You may be transgender or fluid and no longer want to use your birth name. You may have written work earlier in your career, and need a fresh start. There are some good reasons for doing this, but make sure that this is important to you, as changing your pen name multiple times can really make it hard for past fans of your work to find you. (Though as we will see in the next category—if people want to find you, they will. Man, didn’t mean that to sound so ominous. If they’re fans, they’ll seek out your work.)

GENRES AND CAREERS YOU WANT TO KEEP SEPARATE 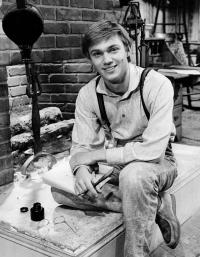 THE SAME (OR SIMILAR) NAMES

Is your name Steven King and not Stephen King? Ha, that guy has certainly suckered in people looking for the king of horror. Tsk, tsk. Not cool, buddy. But I can honestly say that I once thought about changing my pen name. Maybe you’re not old enough, but there is an actor named Richard Thomas. That’s right, John-boy Walton. And he is also a writer! What you may NOT know is that while The Waltons may not cross over into my world of speculative fiction, we actually have some things in common. He has some connections to horror, and the aforementioned Stephen King. He portrayed Bill Denbrough in the 1990 television adaptation of It, and Howard Cottrell in the television adaptation of Autopsy Room Four that aired on the 2006 television anthology Nightmares & Dreamscapes: From the Stories of Stephen King. And oddly enough, Bill is a writer! So I can remember watching the television show and seeing my name pop up at the end…”and Richard Thomas.” So surreal. So yes, at one point I did consider a pseudonym, but when I was signing the papers to buy my house with my wife, signing Richard Gordon Thomas III a hundred times, I said, “Screw it, I’m keeping it simple.” And it’s been Richard Thomas ever since. Even if I do still have to battle John-boy on the Google search engines, and get an odd email or DM now and then from some aging Waltons fan.

There are some good reasons to use a pen name, so if the shoe fits, cram it on there. Just be sure that you are committed to doing this, because you want to make sure your fans can find you. And as with all advice I give in my column, do what works for you. If it feels right, and it makes you happy, create a pseudonym. Heck, like Craig, make two! Best of luck out there, and keep writing.