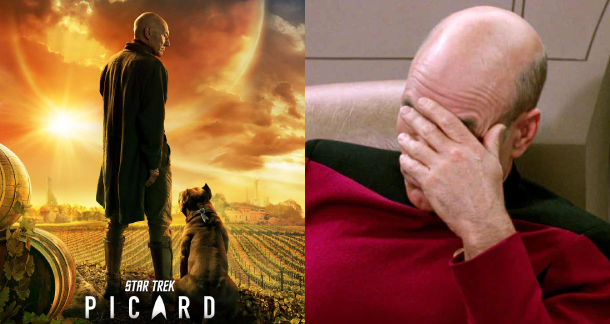 Jean-Luc Picard has always been my captain. He was my TV dad, teaching me more about the difference between right and wrong than eighteen years of church. When faced with a moral quandary, I ask myself “What would JL do?” I have watched just about every minute of Star Trek that exists, and loved them all in their own special ways, but it was Picard that turned me from a casual rerun viewer into the hardcore fan I am today. So Star Trek: Picard promised to be the show I’d been asking Santa Clause for every Christmas the last twenty-six years. It set some very high expectations in its early episodes, but unfortunately can’t quite live up to them at the end. While it is a fun adventure and beautiful love letter to the fans, ambition overpowers the artistry as the finale approaches.

Star Trek: Picard picks up twenty years after the end of the movie Nemesis. The titular character has retired from Starfleet after the failure of a rescue operation to relocate billions of refugees from the destruction of Romulus. He is content to write history books and make wine until an android girl named Dahj walks into his life and asks for his help. Before he can, she is assassinated by a secretive Romulan order dedicated to the eradication of all synthetic life. Convinced that Dahj and her sister Soji are the daughters of his departed friend Data, Picard sets out to find the other twin and protect her. His search takes him to corners of the galaxy we don’t often get to see, and introduces some truly endearing characters along the way. And as the first Star Trek show to be set outside of Starfleet, it provides a refreshingly new perspective on a familiar place.

While it is a fun adventure and beautiful love letter to the fans, ambition overpowers the artistry as the finale approaches.

My answer to the classic question was always that if you’re going into combat, you want Captain Sisko. But if you take Captain Picard, you probably won’t have to fight in the first place. Although a seasoned starship strategist, what distinguished him was not his record of battle, but his diplomatic prowess. Time and again, Picard resolved interplanetary conflicts without a shot fired. He relied on the righteousness of his cause and the eloquence of his words rather than the strength of his fists and skills with a phaser. Picard could even lecture his enemies into submission, either shaming them so thoroughly they lost the will to fight, or somehow convincing them to be friends. All of these elements are still present in Picard, but they have changed with the passage of time. He still gives the speeches, but he is often ignored, dismissed as an old blowhard. Another admiral actually tells him to shut the fuck up at one point (and the look on Picard’s face is priceless). Starfleet essentially casts him out because he reminds them of the lofty ideals they fail to uphold. This time around, he doesn’t have the flagship of the Federation and a crew of dedicated officers at his command. Picard has to hustle and scrounge to put together a band of misfits for this unsanctioned mission, and he will have to resort to using deception and even violence to accomplish it.

Picard boasts a colorful ensemble cast that frequently manages to steal the spotlight from Sir Patrick Stewart. This is where Star Trek has always excelled in all its forms: memorable characters interacting with each other in fun ways. Raffi is hilarious as the Federation’s biggest Picard hater who is forced time and again to admit her grudging respect. Captain Rios with his crew of holographic doppelgängers and Elnor the radically candid Romulan samurai are definitely tied for most fascinating new character. A few old favorites make some heartwarming and badass appearances as well, with Data taking a rather touching final bow.

Unfortunately, much like the Enterprise in almost every movie, the show does not land well. As the final two episodes begin, the show forgets to be Star Trek and becomes just another sci-fi action adventure. There’s genocidal robots, starship battles, a literal deus ex machina, and (sigh) a race against time to destroy a giant tower shooting a beam into the sky that will open a portal to the Bad Guys. It’s disappointing that when we finally encounter this new world full of synthetic life, we learn almost nothing about them except how easily they accept genocide as the only solution to their problems. Star Trek was unique in sci-fi as it rarely dealt in utterly evil villains—every antagonist had a perspective that could be understood, if not always tolerated. The synths of Copellius need only the slightest push to descend into killer robots. Most aggravating is the feeble attempt to fake us out with Picard’s death, which is undone ten minutes later. It’s the same cheap move pulled by J.J. Abrams in Star Trek: Into Darkness, so painfully predictable that it robs the death of any emotional resonance. If I had believed for a second that Picard was really dead and gone, I would have been bawling like Elnor. Instead of feeling anything when the camera goes around to show us everyone grieving the loss of this great man, I checked to see how much time was left in the episode. When he came back, there was no wash of relief or spark of joy, because I never thought he was really gone.

In their last meeting, Data asks Picard to turn him off when he leaves, essentially ending his life. Data attempts to explain the themes of the show, positing that life has value because it is finite and easily lost. As such, his life cannot be complete without a death. And while it is a beautiful scene between two beloved characters, this part rings particularly hollow. Sure, Picard died, but he’s going to be resurrected in the very next scene. The fact that Dr. Alton Soong has perfected the transfer of human consciousness into artificial bodies completely undermines everything Data just said—how precious can life be once a cure for death has been invented? No, the true theme of Picard comes from the admiral himself: “I don’t want the game to end.” In that respect, I can understand. Despite a disappointing ending, I still cannot wait to see what happens in season two.

'Discovery' vs. 'The Orville': Who Treks Better?

I loved every second of the show except for Picard's death. You could actually watch them set up what they needed beforehand. If they'd been able to surprise us with his "resurrection," I think that would have had a better reaction from me than "well, this is pointless" and having to explain why to my husband.

Also, by that time, I had already surmised what was going to eventually happen because they gave it away with the small glass-like pieces that made up Picard's face at the end.

Otherwise or, I guess you could say, now that that's out of the way, I want to see more adventures and character development with this new crew. I like the fact that Picard goes from being "the Jean-Luc Picard" to just "J.L." -- he's brought down to an entirely relatable level but he's probably a bit more like Patrick Stewart now. And fanservice says Ian McKellan needs to guest star at some point.

The long-rumored \"Star Trek: Picard\" series was officially unveiled last week, and it has already earned a lot of criticism for what some see as its slight resemblance to the big screen reboot. I am pleased to find this https://www.toppaperwritingservice.com/ source for my educational info as the new show focuses on the beloved Captain Picard in his later years as he returns from his life of diplomacy and adventure to a more mundane existence at home.