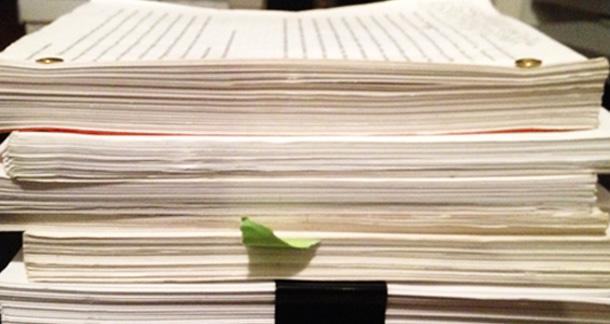 About half a dozen years ago I realized that if I ever wanted to be successful at anything, I had to pick ONE thing.

I was a jack-of-all-trades, master-of-nothing kind of gal, and while I'll probably never truly master anything, I realized that I wasn't nearly gifted enough to be successful in multiple writing-related areas, certainly not when I hadn't yet accomplished anything major in my writing-related life.

At the time I was dabbling in writing screenplays, teleplays, comics and novels, not to mention getting my feet wet with blogging and a journal web comic (that I both wrote and illustrated). Suffice to say, nothing was getting done.

Like any writer, I have a lot of good ideas, but a good idea is nearly worthless if you can't turn it into something consumable, something tangible. To make matters worse, not only do you have to turn that idea into something tangible, you have to actually finish it. Having a dozen projects at the 96% line means LESS than having one project at 100%. I could almost visualize my future — one in which I died — buried in unfinished projects that had never seen the light of day. Not a has-been, but a never-was. My greatest fear, if not realized, then at least visualized. And with that painful visualization I made the command decision that if I wanted to succeed at something I had to pick one thing and focus on it until it was 100% complete — meaning published. Stopping before that happened and changing gears was no longer an option.

I have a lot of good ideas, but a good idea is nearly worthless if you can't turn it into something consumable, something tangible.

I picked my novel. I loved it the most and believed in it the most. It had the most potential to my mind, and it was the project I thought I had the most energy for. I pursued the novel relentlessly, with a reasonable amount of single-minded-ness for the next five years. I did do other things, like pick up freelance writing gigs and continue blogging, as well as eventually joining twitter, but all with the idea of "building my brand." I hoped all these activities would eventually serve my novel, even thought they drew my time and attention away from it.

Honestly? It worked. Not the way I expected it to, and not as quickly as I wanted it to, but it worked.

So why now, six (ish) years later, do I find myself right back where I started in some respects?

After a modest amount of success with my first novel, I found myself with a new literary agent and a manager. Legit and powerful people who believed in me and could actually get my work seen. But what work? Sure, I had another book that my agent and I got to work on right away, and I had a comic book in development with a publisher, but I wasn't sitting on bunches of spec scripts to give to my new manager. The novel had done what it was supposed to do — hell, it had done way more than I'd expected of it — but now I didn't have piles upon piles of work to hand out.

So began the process of learning how and what I should be trying to write in order to become the "multi-hypenate" I'd always wanted to be, and believed I could be if given the opportunity.

I once again find myself torn between not only multiple projects/ideas, but also multiple disciplines. And spec script writing for television is particularly difficult if it's not old hat for you. If you've been say, writing original novels and comics for most of your life, it takes completely different writing muscles. Writing a spec script that nobody will ever buy/produce and is basically just a very detailed resume feels frequently fruitless and beyond your control. You need to know enough about an existing property that you can write effortlessly in that voice, and also invest emotionally enough in it that readers can feel that investment in the characters and world. However, you also have to know how to hold yourself (and your script) at arm's length from actual continuity, not getting flustered or defeated by the fact that your script doesn't actually fit into the world you see on television as it cranks out episodes week after week. It's confusing. It's hard.

I've found I have a lot of ideas for television shows that I initially feel I could turn into a decent script, but once I sit down to do that, it feels Herculean because I'm not used to doing it. It really gives me a whole new respect for the discipline, and I admit, on some level at least, a desire to master it.

But what sits on the sidelines while I attempt and likely fail to master said new discipline? Well, the new novel is on pause...and the three new comic book ideas I was developing...as well as the screenplay I was working on...and the web comic I wanted to do. It's a lot to put on pause. And frankly, I shouldn't have even had all those things running concurrently if I had learned my lesson the first time. But how else can a writer hope to succeed? With book advances lower than ever, becoming a multi-hyphenate seems like the only way to be someone that says they "write for a living." And more than anything, that's what I want. To be able to say that. I mean, I've been saying it for the last year (and it's been true, because I've been very lucky), but it's always had an implied expiration date on it, unless I can continue to produce good and saleable work.

So am I shooting myself in the foot by trying to do too much, too fast, spreading myself too thin? What do you think? And what about you guys — do you write in multiple mediums? Do you focus on one? Do you even WANT to be a multi-hyphenate? Or would your rather just write novels and work a day job? What's the magic combination that you perceive will make you happy? And how are you trying to get there?

I love reading your thoughts as you grapple with these obstacles. I know it's a struggle but I also feel like these are super interesting problems to have!

In the past, I thought that multi-hypenate strictly implied different mediums and disciplines. But after sampling (and floudering!) as a creator of many different kinds of art, I've really come to respect the drive and focus it takes to do one specific kind of creation and do it really well.

I'm trying to limit my activities while I work on my current historical novel project. I have one memoir project that has been gnawing at me. I allowed myself to write a 3800 word piece that covered some of that material and that helped relieved the drive a bit (it's now be circulated). But there are about 3 other memoir projects, another novel and I want to write a screenplay based upon a J. B. Priestly novel (and, like you, need to master that form). All that in addition to a body of creative non-fiction and travel pieces that I'm circulating and continue to groom. Then there are the three short stories I started, just to get the ideas down. And starting the blog for the historical novel...

I'm afraid if I don't keep myself on a short leash, I'll never finish the novel. Maybe by the second novel, I'll have my process down so well that I'll be able to work in a more disciplined fashion on other projects simultaneously. But not right now ;)

I keep stumbling on your columns here and there, and it's cool to see what the whole progression looks like. Sometimes I feel like no matter how much research I do on the process of getting published the more in the dark I am. I'm working on my first novel, but I can't stop thinking about TV and movie ideas that I have too. Sometimes I get an idea for a scene or a story and I think I could write a novel about that, but then it occurs to me that some things just have to be done on screen with music and good direction.

Percy Dlamini from South Africa is reading Everything is Illuminated, The Time Traveler's Wife, The Shadow of The Wind December 5, 2013 - 5:36am

yikes. I want to create manga comics, and be a part of an anime creating cast, and write hundreds of short stories, and make music.

I have an artists eye (good at drawing), because of this unlearned talent, i neglected the 'practice bit', so the manga and anime dream is a distant, foggy desire.

I've created good songs, but always stop and start, now I dream of creating music which compliments my stories. *sigh* commitment problems and ill practice has my guitar collecting dust.

I think discipline is the problem, being a writer comes with its own issues, but hardwork in a specific direction is a good mantra. even if it means splicing the 'specific direction', hardwork pays off. It would cost you though, (sleep, social life, vitamin D, etc.)