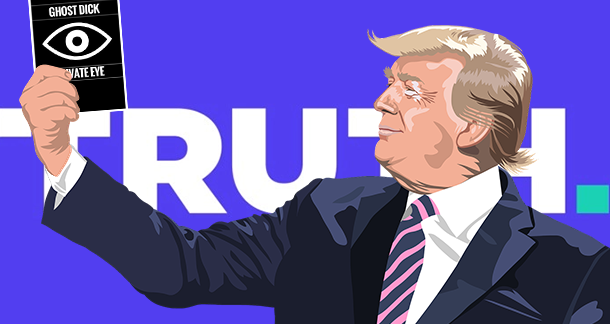 There are pathetic storms that don’t really have lasting impact, right?

Either way, is it possible that Truth Social, Donald Trump's new social media platform/spite project, is a fertile ground for book selling?

Instagram started as a place to photograph said lunch.

TikTok started as a humble platform where people do dances. And look at it now! It’s…still that, but very popular!

Truth Social puts you in a queue.

Then they give you this highly ironic screen that tells you you’re more than just a number, and here’s your number. 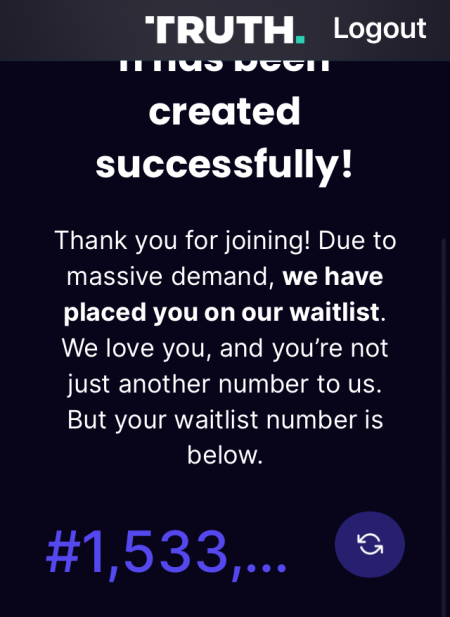 In the spirit of Truth Social, which is probably the best place for wacky conspiracies online, I’ll share an unfounded theory as to why Truth doesn't just open the floodgates to new users:

And if Truth can slow the tide of people jumping on, they slow down the flow of information outlining exactly how much it sucks. Which some might call the truth.

While I waited for approval, I debated the ethics of selling on Truth Social with myself.

I mean, fuck ethics. If conservative weirdos want to buy my books, hey, their money spends.

While I waited some more because the approval process is slow as shit, I checked whether you can pay for ads on Truth Social.

Try any other platform, they make it easy as hell. Spotify, Google, TikTok—you don’t even need a TikTok profile to throw an ad on TikTok.

Truth Social, what are you doing? People want to throw their money down a digital toilet, you’ve got a gigantic one. Sell me a flush!

I was Truthing hard. And Truth was not making it easy.

Finally, I was in!

First things first, I had to create a persona to engage other Truthophiles (this is what I started calling them because of the frothing, sexual excitement some display over on Truth).

For my profile pic, I took a selfie of me slumped in an easy chair, looking constipated as all hell. Which seems to be the selfie of choice of conservative men my age.

Then I Truthed about things I thought conservatives liked.

I used hashtags, some of which I made up, I think:

And then I peppered in plugs for my books.

I was Truthing hard.

And Truth was not making it easy.

Truth Social is a goddamn ghost town. Although that might be insulting to ghost towns because ghost towns were usually popular at one time.

Also, lots of bots roam the streets of Truth, so I guess whether or not Truth is deserted depends on your views of AI personhood.

Not many conservative thinkers or speakers or politicians or what have you are actually on Truth Social. Most of what you’ll find there are fan accounts for fourth-tier politicians whose closest experience to Presidency is sniffing dollar bills soaked in someone's ass sweat.

What's the app like as far as user experience?

In the 90's I tried to play Tomb Raider on a completely underpowered laptop with a trackpad. The computer was so slow you had to sort of predict how long it would take to reach the edge of a platform, push the jump key a few strides early, and hope you’d correctly predicted the lag. I never really figured out whether my gun fired when I tapped the key, heard the gunshot sound, or saw the firing animation, all of which happened at different times. Everything was janky and wrong about the way I interfaced with Tomb Raider. This is sort of how it feels to use Truth Social.

Imagine McDonald's adds a pretty solid vegan menu to their offerings. In response, Burger King installs plexiglass boxes on the side of each restaurant where a dude chainsaws the heads off of live cows 24/7 to make the burgers that are eaten in front of the slaughtered cows' mothers.

What Truth doesn't understand is that when you've got a problem, like Twitter being too progressive, the answer isn't always going full blast in the opposite direction. In the above example, BK could just lean into being a carnivore's paradise, but a full-on Extra Cruelty Menu isn't really pleasing anybody.

I thought Truth was going to be like Twitter, just more conservative overall, but Truth goes so hard on conservative politics that politics is all it offers.

Who in the fuck wants an all-politics social media platform?

Did I Make That Money?

I did not. I did not make that money.

However, I barely move any copies on ANY social media. So…sales-wise, Truth Social sucks about as hard as everything else, which is to say that it sucks completely.

At this juncture, I will declare that I’ve made the ethical decision to remove myself from Truth Social. It is my hope that others will see this bold move and purchase my books to support me.

Any sales port in a commerce storm. 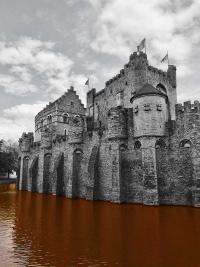 There’s probably a future where a right-wing platform actually works, or an existing platform could change in such a way that it becomes more right wing. When that happens, writers will have to make a hard choice about where and how they promote their books.

Or, maybe not. Maybe they've already made that decision.

Because there’s no such thing as ethical selling on social media.

Your book might be good, your heart might be pure, but Tweeting about it brings people to a platform where your goodness is surrounded by an unending, churning moat of bullshit for people to wade through.

There’s no ethical version of bringing people back to that moat, and every time you sell your book on social media, you stand on that moat's far shore, cup your hand to your mouth, and yell to complete strangers, "C'mon, take another dip!"

Here's my last Truth: social media is a shit moat, and when I see a shit moat, it doesn't really matter to me whether the shitters who filled it are conservative or progressive.

Get How to Break Up with Your Phone: The 30-Day Plan to Take Back Your Life by Catherine Price at Bookshop or Amazon

Get Passing On The Right: My Ups, My Downs, My Lefts, My Rights, My Wrongs ... and My Career (So Far) in this Bizarro World of Comedy by Mike Sacks at Bookshop or Amazon

Really impressive. Thanks for sharing such a valuable tips. After spending years in concrete, welding and labor inspection. I have wrote a book at Women in Construction melbourne. Which got favor in malbour. But after reading this column. I am going to follow these step so I could also sell my book through social media.