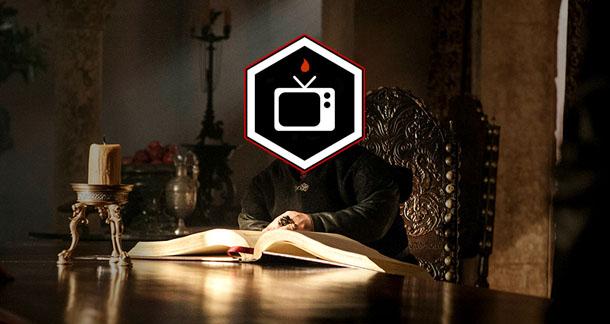 Last night's episode, Kissed by Fire, was a workman episode. There wasn't a whole lot of forward movement, but it expertly lined up plotlines and character relationships that will pay off for the rest of the season, and beyond.

More than that, the show did two things it doesn't often do: It displayed a fair amount of tender moments in a show that is nearly devoid of them, and it took a deep breath without drowning in a sea of too many characters and locations.

Appearing smack dab in the middle of the season, I think that deep breath was necessary.

It was nice to finally get some time with Jon Snow, who got a few perfunctory scenes in the previous four episodes. While he didn't get a huge shake last night, he did get laid, so good on him.

Sex is often used on this show as a form of power or manipulation, and this might have been the first instance of two characters going at it without some kind of agenda. Granted, Ygritte may have been making double-sure Snow had renounced his membership in the Night's Watch by getting him to break his vow of celibacy—but it came off as a little more affectionate than that.

Equally tender was the episode's other bathing scene, between Brienne and Jaime. It seems to start off as a power play. But it also showcases Jaime's first real vulnerable moment, in which he explains that he killed the Mad King to prevent him from burning King's Landing and killing every man, woman and child within city limits. Brienne suddenly has a new perspective on Jaime, that maybe the Kingslayer moniker shouldn't be such a pejorative.

The slowest—and most surprising—set of scenes revolved around Stannis Baratheon (a character who might have been intolerable if not for Stephen Dillane). Last night he visited with his wife, Selyse Florent, and his greyscale-afflicted daughter, Shireen. Two characters I was fairly confident would be jettisoned in the name of keeping the cast manageable. Honestly, I don't recall them having any great bearing on the books, and it seems they could be cut without affecting the overall arc of the story.

So I felt a little trepidation when they appeared on screen, wondering if it would be too much. But as the scene went on, it was nice to see Stannis get to do something besides complain, or mack it to Melisandre. And it brought us another heartwarming scene, between Shireen and Ser Davos. How adorable was that, her sneaking down to the dungeons and offering to teach him how to read? Especially on a show that can be so violently depressing?

Of course, not all is well and good in Westeros. Sandor Clegane is forced into a trial by combat, against Lord Beric Dondarrion and his flaming sword. Clegane wins, Arya is pissed that he gets to walk away, and Dondarrion appears to be some form of zombie.

Meanwhile, the cracks are showing in the veneer of Robb's rule, as he's forced to contend with dissent in the ranks. The Karstark's murder the two Lannister boys being held captive, so Robb has them executed. It was a tough decision, though it didn't feel like the wrong one, even though it resulted in the Karstarks abandoning him.

Daenerys pulled the short straw in this episode. After completely, positively owning the last episode by overthrowing the slave city of Astapor, she gets a brief scene with the Unsullied (and hey, there's Grey Worm!).

But the highlight was the loaded conversation between Ser Barristan Selmy and Ser Jorah Mormont. On the surface is was two old men arguing over who got to be BFF with Daenerys (and therefore was a little creepy), but on a deeper level, they were feeling out each others' loyalties—and trying to figure out what they know about each other.

And finally, Tyrion and Cersei finally find themselves on some common ground. Tywin, who is so cold and calculating and efficient you almost have to respect it, is planning to marry Sansa to Tyrion to secure Winterfell. Cersei is thrilled to watch Tyrion squirm, until she learns she'll have to marry Ser Loras so the Lannisters can stake claim to Highgarden Castle, the seat of House Tyrell.

Earlier in the season, I expressed concern that the show was starting to buckle under the weight of the the humongous cast and far-flung locations. The showrunners served me a big heapin' plate of crow last night, with an episode that managed to pack in a lot of character development and even slow things down a little, without sacrificing the story. Color me impressed.

Jeff from Florida is reading Another Side of Bob Dylan by Victor Maymudes April 30, 2013 - 6:19pm

Someone's got a perverse sense of humor!  "You will wed Sansa, bed her and put a child in her" Lord Tywin deadpans to Tyrion as only a top notch aristocrat like him could. Innocent Sansa hooked up with the swingin' imp? Really?

And merely add one Kingslayer to her bathwater and the fierce amazon warrior known as Brienne becomes a shy school girl, cradling her breasts in modesty. Until of course he pisses her off.

But the best moment was John Snow's. Finally that ginger wench Ygritte's ridicule is properly stoppered!

Actually, because of the tenderness in the episode, for maybe the first time in this show, the nudity didn't feel gratuitous (most of it anyway). In fact, Brienne's nudity was "right for the script," as it actually underpinned her vulnerability.

I didn't feel the arc was thrown at all; scenes and often entire episodes are needed where action is muted in favor of character. Not having read the books, I learned some humanizing aspects to Jaime's character that never would've come through for me had he just been marched around wearing his hand till they finally got him to King's Landing. Ditto with Jon Snow and Rob Stark (I hope I'm getting these names right; 3-1/2 seasons and no books and I'm still having a bitch of a time with all these names!). That said, I'm really stoked to see how this season ends.

Joshua Chaplinsky from New York is reading a lot more during the quarantine May 6, 2013 - 10:03am

Above the wall, men don't like to go "below the wall."

Is that why this ep was called "Kissed by Fire?"

We're inching towards the end of Game of Thrones season three, and it's all about to go down. After last week's epic battle, we find out what happened to the major players post-war. Roose Bolton is rewarded with a new title, Lord of the Dreadfort, for his fierce loyalty to the Lannisters. Robb Stark is shocked that he has been betrayed by one of his own men (but not shocked enough to reconsider marrying a woman he doesn't love). Jon Snow and Ygritte are stranded in the woods after falling into a river during their escape. In King's Landing, Tyrion is still recovering from his wounds after being attacked by Ser Mandon Moore (whom we learned was hired by Cersei). And across the sea, Daenerys is on her way to reclaiming her dragons from the House of the Undying. Well, I am on to visit top casinos without instant deposit online through the website https://seedroyaltysurvey.com/no-deposit/ because one of my pals visited it and earned a lot of money, I hope I will do the same with it.