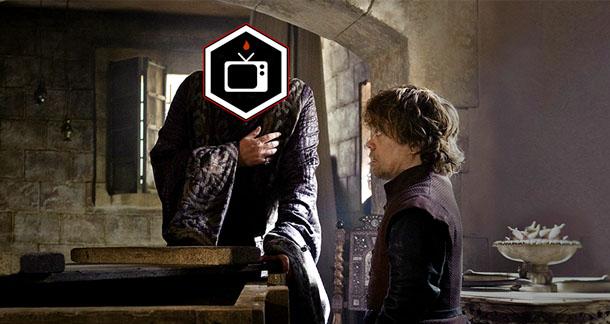 With a few exceptions, there's often a huge gulf between Daenerys Targaryen's rhetoric and actions. She talks a good game, but the idea of dragons is sometimes more formidable than the dragons themselves. The success of her demand for sanctuary outside the gates of Qarth was thanks, in large part, to Xaro Xhoan Daxos's greed. She's had a couple of strong moments, and there's been hints of the leader taking root inside her, but they've been brief and incomplete.

Last night it came to the fore. Her double-cross of the slavers in Astapor is a very good scene in the book. It's a remarkable scene on the show. Thrilling, expertly acted and paced, and finally making good on every bold statement she's made. She's no longer a young girl playing at being a queen—she's a liberator with an army at her back.

Clarke's stony, cool performance sells this transformation. And Iain Glen as Ser Jorah Mormont adds a great deal of weight to it to, acting as the surrogate for the audience, conveying a mix of awe, disbelief, and fear.

Cheers to the effects crew, too. The world of Westeros is a very big place that often feels very small because of the confines of television and the limits of HBO's budget. No fault of theirs, of course—you work with what you got. But this scene felt appropriately epic.

Daenerys' victory stands in stark contrast to the rest of the characters we visited with last night, nearly all of their stories unbearably tragic. And it made me wonder, who's the most tragic?

When we first met Jaime Lannister he was a cocky bastard who pushed a kid out a window. Though he's spent so much of this show a captive of the Starks, he always seemed to have the psychological upper hand. And last night, he's wearing his sword hand around his neck, a gruesome reminder that his career as the greatest knight in Westeros is finished.

What about Theon? He killed two children, and set in motion the events that sacked Winterfell. But he's been a captive of the Starks all his life. He's not accepted by the Greyjoys or the Starks and is only looking for someone to recognize him as their own. And after he's been tortured and dragged through the woods by Ramsay Snow, just when he's sure he's about to taste freedom, he's back on the rack.

How about Sansa? Her greatest sin pales in comparison to everyone else: She refused to take sides in the tiff between Joffrey and Arya. And now she sits by the sea, praying for things she can't even admit to. Lord Commander Jeor Mormont's only sin was trusting a bastard like Craster. He paid for it with his life, stabbed to death by his own men.

Even Lord Varys gets in on the pity party, finally conveying the story of his castration, which, gross. And creepy.

But, wow, last night was a constant drumbeat of tragedy, wasn't it? It probably would have been almost overwhelmingly depressing, had it not been for Daenerys logging a big win at the end. That balance is incredibly important to a show like this. One of the (myriad) of failures of The Walking Dead is that the show is so fucking grim, constantly, all the time. When the episode opens with a man wearing his own hand around his neck, you need to end on a high note. Otherwise it's just depressing.

So it's nice to see that Daenerys is kicking ass and taking names. The other ladies on the show, too—Margaery Tyrell is growing increasingly more successful in her manipulations of Joffrey, and it's satisfying to see Cersei struggling to maintain her grip on her son. Even though she's the only character on this show I have yet to feel bad for, Lena Heady gets major kudos for a fantastic speech to her father, about why she's the child he should favor.

Heady's performance also gets to the heart of something I enjoy about this show: That the female characters are much stronger than anyone really gives them credit for—especially considering the faux-Middle Ages setting.

Margaery Tyrell, Cersei Lannister, Daenerys Targaryen, Olenna Redwyne (the Queen of Thorns) all came up big last night. Even Brienne gets a nice moment. She's a captive but not a victim, and she essentially calls Jaime a bitch because he's fallen from his place of privilege.

Of course, this is a show where women have gotten raped and beaten and are often treated as eye candy (see below's weekly boobwatch). So I'm curious to know, especially from our female readers, how you feel about the portrayal of women in this show—and if last night's episode was a high-water mark for the woman of Westeros, which is what it felt like to me.

So, discuss! Wasn't Daenerys great? Also, who had the greater indignity committed against them—Theon, and the ruse played against him, or Jaime, being forced to wear his hand like a necklace? And let's talk about the ladies of Westeros...

When I first saw Jaime's hand, I assumed it was being kept as a trophy by the one who chopped it off. Then they pan up and holy crap it's around Jaime's neck. I felt it was a wonderful touch, as it reminded me of Rime of the Ancient Mariner (when the mariner is made to wear the dead albatross around his neck as punishment and a reminder of his sin).

Jeff from Florida is reading Another Side of Bob Dylan by Victor Maymudes April 23, 2013 - 8:39am

The opening with Lord Varys was like a classic ghost story told round the campfire. Sure it's a tragic tale, but the the one who did it to him turns out to be in the crate! Now what will you do to him, master of whisperers?

But the rebellion in the ranks! When the men of the night's watch put that rat bastard daughter-raping 'wildling' to the sword. That was anarchy at its best.  You are starving and freezing and someone is feeding you with sawdust-filled bread. Some hothead or two take matters into their own hands and the Lord Commander ends up with a sword in his gut too! Yeah, tragic,  but in the best carthartic sense of the word. I didn't see that scene as "sad"at all.

I hated the scene with Mormont in the book and I still hate it.  For me, Mormont's death is a turning point and shows the inevitable collapse of the wall.  It shows that the men will never be loyal and they are not a team.  Which, comes up again later in an even sadder scene that I am still in denial of.  The women ARE great and the casting is even better, proving that even if you struggle for equality, it's still attainable if you're strong enough to take it.

at what point is the casual viewer going to need a graph and a guide to keep track of everything?

While the Astapor double cross was a little obvious (I'm not a book reader), the scene was spectacular. Bravo all the way around. The fact she understood the slave master the entire time he was calling her a whore, bitch, etc. made her that much stronger and...well more awesome.

I don't really get what the Men of the Night's Watch are really doing. I know it's probably a hike, but go back to the Wall, guys. Surely they're not still looking for Ned Stark's brother (Ben?) -- that was over a year ago. (I'm still waiting on him to show back up and take over the Wall)

We didn't see Rob this episode. What the hell is he doing, anyway? He seems to just be hanging out with no real plan of action. He was supposedly winning every battle he came across and now he's just kind of chilling. Attack, Rob! Negotiate! Do something besides attending weddings and funerals!

If Olenna Redwyne was 50 years younger and looked like Margaery, she'd be my dream wife.

Thought Varys keeping a sorcerer in a crate for revenge was a little out of character.

Who knew the Lord of Light had more followers?

Didn't mean to write another article in the comment section. Hard to touch even half of what's going on, though. Good write up.

Maybe I shouldn't write this, but Stratton has just unknowingly written something hilariously spoiler-y, don't you think, book readers? :D

Tish77 from Central Qld, Australia is reading something different everytime I log in... Currently The Diary of a Young Girl by Anne Frank April 24, 2013 - 10:27pm

The portrayal of females to me is just fine. Even Ros is covering up now and she is evolving and using the brain she always had to advance herself.

Obviously Dany owned this episode and thinking back to her taking that boiling bath before she met Drogo - it's wonderful to see this development. Emilia is nailing it!

This episode gave me goosebumps several times! It was so amazing. I felt the same pity except for Theon, that rat bastard deserves it!

There are deviated from the book, which is quite interesting for me. And one more informtaion for those who live outside USA can wathc Game of Thrones with the help of this tutorial.