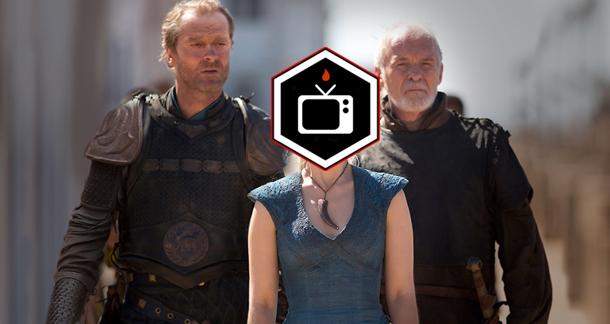 There were two scenes in last night's episode, Walk of Punishment, that really got to the heart of why I love this show.

The first was the Game of Musical Chairs, in which the small council vies for position around Tywin Lannister. Cersei being Cersei, refusing to sit on the other side of the table, drags a chair to sit next to her father, smirking all the way at her cleverness. The scene is brilliantly capped by Tyrion taking the head of the table, opposite Tywin. A position of power, but as far from everyone else as he could get.

The next scene was Tyrion digging through the kingdom's financial records, and realizing how their opulence was a farce, and they were in a dangerous amount of debt. He then gives a brief economics lesson to Bronn, explaining that if they don't pay what they owe, their lenders could turn around and finance their enemies. It's a precarious position, but the kind of precarious position most people tend to ignore. (See: The United States of America). I guess this makes Tyrion the Paul Krugman of Westeros?

Game of Thrones really succeeds when it explores politics and power, taking these concepts and making them modern and accessible. That's the point of the show's title, after all, and so perfectly summed up by Varys last season, when he tells Tyrion: "Power resides where men believe it resides. It's a trick, a shadow on the wall."

Maybe it's because I have a background in politics, but I love this stuff.

While those scenes were some of the best this season, it's not like the rest of the episode was a sleeper, and it allayed the fears I expressed last episode, that the show might be reaching a critical mass of character and story. This episode felt a little more slow and complete, lingering on some fantastic moments—Cat and Brynden Tully at the window, Robb dressing down some dude for being ambitious to a fault, Jaime's increasing respect of and concern for Brienne. And Hot Pie's emotional farewell to Gendry and Arya. Which, c'mon, was a little sad.

The only scene that felt like filler was Stannis trying to mack it to Melisandre before she left for... somewhere. But Stannis is one of those characters who's easy to forget about, so I guess that minute-and-a-half was necessary, just as a reminder to the audience that he's still floating around.

And again, Jon Snow gets two minutes of screen time (in that creepy horse head spiral), and I'm wondering how long we have to wait before they dig in to his storyline (my theory is that if the third book is being split in two, and only half is being told this season, then next season will focus more on what happens at The Wall and Castle Black... but we'll see).

Ultimately, though, I believe this episode belonged to Daenerys. After spending nearly all of last season in stasis, she's finally being proactive: Preparing to purchase an army, clearly unsettled by the slave culture of Astapor, and putting Jorah Mormont and Barristan Selmy in their place for questioning her in front of others.

The endgame of her deal was pretty strongly broadcast—my wife guessed it right off, having not read the books. Still, next episode should be fun. And violent.

Meanwhile, the episode ends on a strong note. Jaime is one of those characters who's so easy to like, despite him being such a huge dick (even though the only truly evil thing he's done is push Bran out a window). That he stopped a bunch of creeps from raping Brienne is admirable, but he pays the price in a moment that you knew was coming if you've read the books, but is still brutal as hell: Locke (a stand-in for the book's Vargo Hoat), hacks off Jaime's hand to make it clear that for all his bluster, he's not as powerful as he thinks he is. Especially when his daddy isn't around to protect him.

I should have added this to the two scenes I cited at the start of this recap. This is a show about power, and the effectiveness and reality of it. Jaime might be one of the best knights in the kingdom, and his father may be wealthy beyond comprehension and the defacto king of the realm, but all that means nothing when you're in the woods, miles from home, and some vindictive asshole has a very big knife.

Yes, you're right! He was bluffing! Perhaps not in the show, but in the book he was.  If I remember correctly, the saphire reference comes from the glimmering blue of the water of Tarth.

The Ramsey scenes are confusing so far. I suppose Theon's captors could have not been the Boltons like in the book, and Ramsey is just taking his prize now. I was digging that Iwan Rheon is Ramsey, but at the moment it is pretty confusing what is going on with him and Theon. After all in the books Ramsey was with him, in disguise, at Winterfell and betrayed him there.

In the books we don't SPOILER ALERT READ ON AT YOUR OWN RISK  see Theon again until book five, wherin we find out about all his torture which did involve (if I recall correctly) letting him escape only to unt him down and beat him again.

Also, is anyone still mad they changed Asha's name to Yara?

@James McArthur, I am. That's a stupid change. I'd rather they'd changed Osha's if the two names were that confusing.

Brynden and Edmure were awesome. I loved them. True to canon.

I also felt for Catelyn during that conversation by the window.

Joshua Chaplinsky from New York is reading a lot more during the quarantine April 16, 2013 - 8:28am

Things are picking up. I anticipate some cool stuff in the next couple eps. Love where Jaime and Brienne's relationship is going.