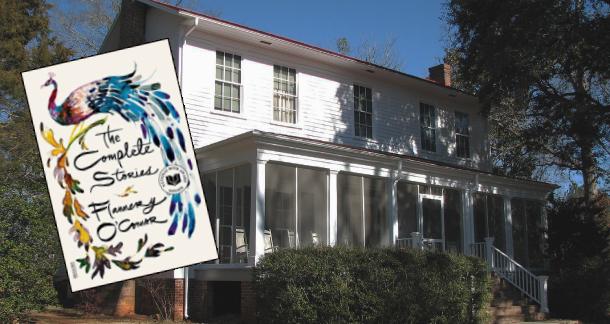 At the end of Flannery O’Connor’s story, “Good Country People,” a young woman with a wooden leg and a fatal heart condition gets seduced by a traveling Bible salesman. Cynical, well-read, and wise beyond her years, she lets her guard down to this simple, salt of the earth, "good country boy"—who is hiding whiskey and cards in one of his Bibles and using a fake name.

At the end of the story, he completes his seduction as she takes off her wooden leg as a sign of trust. He steals the wooden leg and walks away.

In her real life, Flannery O’Connor suffered from lupus—a fatal disease that killed her father and would take her life at the age of 39. She nurtured relationships via writing letters, fearing intimacy, holding no pretenses about the fatality of her disease.

However, in 1953, she was visited by a traveling textbook salesman, Erik Langkjaier. He carried what he called a “bible,” the sales literature he used on the road. The chemistry was immediate—she signed a copy of Wise Blood to him, writing in the inscription: “For Erik, who has wise blood, too.”

He organized his travel and schedule to visit her. She enjoyed their long discussions during long car rides. During one of those rides, he told her that he had to leave for Denmark for a few months, then leaned over and kissed her. She kissed back and wrote him letters while he was away.
However, he kept extending his stay, and as that stay lengthened, she continued writing letters—but she also wrote the story, “Good Country People.”

Soon after, she received a response from Erik. He had met a woman in Denmark, and they had gotten engaged.

In September of 1990, at the age of ten, I was set on fire by a kid who lived down the street. The trauma—like the scar tissue—lasts forever, but the most effective way for me to process and explore its effects on me was through writing.

No writer can ever remove himself or herself so totally from the work that it becomes one-hundred percent fiction.

Not through journaling or memoir—both have their places and uses—but via the craft of fiction I found myself taking the places, people, and events from my life and using them as fuel for my stories.

I first wrote about a burn victim in the short story, “Gasoline,” which appeared in the anthology Burnt Tongues, edited by Chuck Palahniuk, Dennis Widmyer, and Richard Thomas. I remember Chuck’s notes about the realism of the depiction of being set on fire, which added authenticity to the story about a burn victim confronting the villain who had destroyed his life—only in this story, it was himself. I had twisted the story to make it more interesting, turning the sad-sack kid who cried when he saw himself in the mirror into a conflicted, guilty, and anguished soul sentenced to crushing loneliness and wondering how his choices might have created two lost souls.

My latest novel (plug alert: it’s out next month and it’s called The Escape of Light) takes the idea even further as Wilder Tate, a burn victim, starts at a new high school and endures heartbreak and tragedy as he learns how to become a burn survivor—and it features two of the most significant and most seminal events of my teenage life, real events I used as set pieces.

Yet when I am asked, “How much of the novel is real and how much is fake?” I never know how to answer.

Say you’re writing a story about a baseball game, so you think of a baseball field. In your head, you have a list—the one you played on in little league, the one from high school, the first time you played on a college diamond.

For this story, you need the high school diamond. But you need the left fielder to lose a ball in the sun for dramatic effect, so you have to have him facing west when in reality the field you’re thinking of faces east.

And you want it to be a rural baseball game where the underdog kid makes a fantastic catch running through the cut-down cornstalks of a baseball field—you get this idea because the field you’re thinking of used to have a cornfield just behind the fence. So for the sake of this story, you remove the fence.

By the time you’re finished making these changes and a dozen other small ones, let me ask you—is the field real? Or is it fictional?

Here’s the trick—if you’ve done it right, it should confuse you if you’re the author.

It should feel like both to you, and to someone who doesn’t know you and has never been on that ball diamond with you, it should feel like an authentic work of fiction—that you wouldn’t be surprised to learn may exist in real life.

Writing so deeply using material from my own life made something clear to me—that no writer can ever remove himself or herself so totally from the work that it becomes one-hundred percent fiction. The mystery of a writer’s voice often includes not just how they sound on the page, but the signature and often invisible way they describe certain settings, characters, emotions, and events.

Flannery O’Connor sounds a specific way on the page—careful readers could recognize her wit and style from any of her works. But now that you know something about her life story, do you admire “Good Country People” less, or do you admire it more? How much of it is fiction, and how much of it is real?

Perhaps it shouldn’t move the needle at all, but it has opened me up to the breathtaking possibility that anytime I’m reading a good book, no matter where it takes me, I’m much closer to the author—their life experiences, their principles, the vantage point of their life in some specific moment—than I ever considered.

Books were always the most intimate way to experience a story, but when you consider the role of reality in fiction—even when it’s undetectable—it’s there, and you’re touching it on every page, and it makes books even more miraculous than we already knew they were.