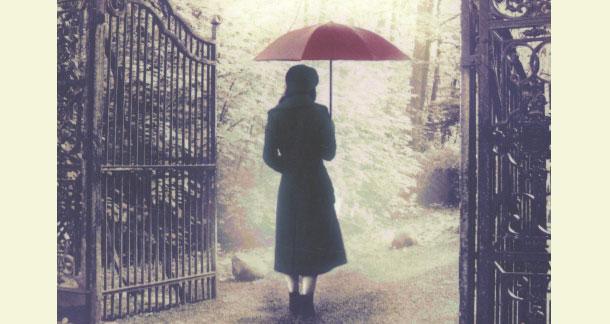 I recently read Daphne by Justine Picardie, a novel that follows Rebecca author Daphne du Maurier during her years of research into Branwell Bronte. The book is just what I like, a juicy literary mystery that is elegantly written, but afterwards I found myself consumed by this new portrait of du Maurier. While much of what Picardie includes in the novel is substantiated or at least alluded to elsewhere - du Maurier's vaguely incestuous relationship with her father, her depression, her unhappy marriage, her obsession with the Brontes - what I find most interesting is the knowledge that this portrait of du Maurier will stick in my mind whenever I think of the author. It doesn't matter that the book is fiction; fictional characters have a tremendous amount of staying power, and Picardie's profoundly realized portrait of du Maurier isn't going anywhere for me. I of course know to take it with a grain of salt, to separate the fact from the fiction, but my view of du Maurier will be forever touched by Picardie's account.

This phenomenon - real people whose presence is colored by fictional portrayals of them - is certainly nothing new. Last month I discussed my love of royal historical fiction, which creates a similar quandary of fact versus fiction. But what I find intriguing about Daphne is that du Maurier herself was a writer; indeed, she wrote a family biography and told her own story. She created lasting characters in Rebecca and My Cousin Rachel and others. She understood the sometimes lurid tricks inherent in crafting a whole person whom readers will find fascinating, the ways to manipulate an audience into buying an entire life built in only a few pages. She also understood the responsibility involved in telling the story of a real person, as she labored for years over her biography of Branwell Bronte.

How, I wonder, would du Maurier feel to find those tricks turned on herself? Would she believe Picardie handled the responsibility of her life with adequate care?

The question is made even murkier when authors turn themselves into characters in their fictional novels, as Clive Cussler (The Dirk Pitt Adventures), David Wong (John Dies at the End), Stephen King and Kurt Vonnegut have all been known to do. How much of our supposed knowledge of Vonnegut and King is based on what we've read of them in The Dark Tower series and Breakfast of Champions, for instance? How many people picture Nicolas Cage when they think of Charlie Kaufman, after Kaufman wrote himself into the screenplay for Adaptation?

Wong's lead character in John Dies at the End is named Dave Wong, which is a pseudonym for the protagonist who claims that, as Wong is the most common name in the world, his new handle will make him harder to find. David Wong is also a nom de plume for John Dies author Jason Pargin. The character of Dave isn't a writer in the novel (he's a slacker ghostbuster more than anything) and the events of his life are unquestionably fictional; in fact, they are downright fantastical. But his personality - dry, witty, lackadaisical, a bit of a horny jerk with a sweetheart dwelling within - is what I will now always think of the author regardless of whether it's true.

Vonnegut and Cussler also place their characters (meaning themselves) in fictional settings or events and allow themselves to react accordingly. But what King did is something different, something arrogant and weird and possibly brilliant: he took a real event from his life, the traumatic injuries he suffered when he was hit by a man driving a minivan, and wrote them into his masterpiece, The Dark Tower series. He also made a character of the man driving the minivan, Bryan Smith - a pretty terrible character, in fact. I will also always be colored by King's understandably biased portrait of Smith regardless of the fact that it's probably untrue. By the time King wrote his version of Smith, Smith had died of an accidental overdose of painkillers and couldn't defend himself from King's harsh words.

King also wrote an utterly eerie scene in The Dark Tower series that takes place years before the car accident. He is at his home and is met by two of the characters he's created: Roland Deschain and Eddie Dean. They try to warn him about the impending accident and ask him to drink less. They inspire him to return to the universe he's neglected for years after only writing the first installment, The Gunslinger. It's a bizarre but resonant bit of writing, one that stays with the reader. A part of me will always wonder if King was motivated by his own characters to return to The Dark Tower series after leaving it alone for decades.

As these authors are creating characters of themselves, one might think the portrayal is more honest and in depth than what another writer might imagine for them, but isn't it likely that the persona they create is a romanticized one? How clearly do we see ourselves? It's possible that Picardie can write du Maurier's character more accurately than du Maurier could herself.

I suspect what makes this phenomena of real authors as fictional characters so fascinating is imagining that these writers might feel the heat of the inexorable and unforgiving examination they use on their own characters turned on themselves. Can you guys think of any other instances of this that I'm forgetting?

My favorite is Cervantes writing about himself in Don Quixote.  This, also, far precedes any of the examples written about in this article.

"Douglas Coupland," a version of himself he constructed from internet rumours, appears in Coupland's JPod.

Courtney from the Midwest is reading Monkey: A Journey to the West and a thousand college textbooks May 23, 2012 - 8:32pm

John Dies At the End was brilliant because Dave Wong is also a staff writer on Cracked under the same pen name -- and John Cheese is another Cracked staff writer.

The fact is that Wong undoubtably created a character loosely based on his best qualities, but his Cracked writing portrays him and John the same way as the novel. The consistency is uncanny. It's what makes it so believable.