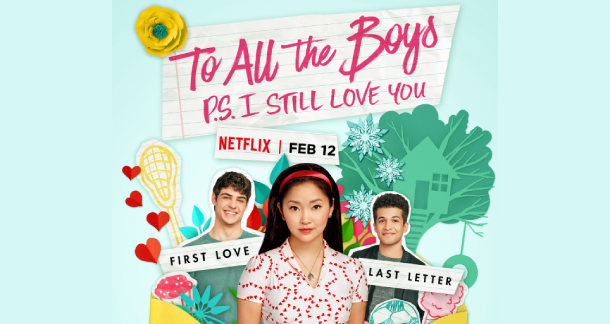 Spoiler alerts for To All the Boys I’ve Loved Before: P.S. I Still Love You and its predecessor below

Netflix gave the world of rom-com lovers the perfect Valentine’s Day gift when they released To All the Boys I’ve Loved Before: P.S. I Still Love You two days before the holiday. I watched it on V-Day itself, curling up with a bag of popcorn and my laptop after waiting two agonizing days to start one of my most highly-anticipated movies of 2020. 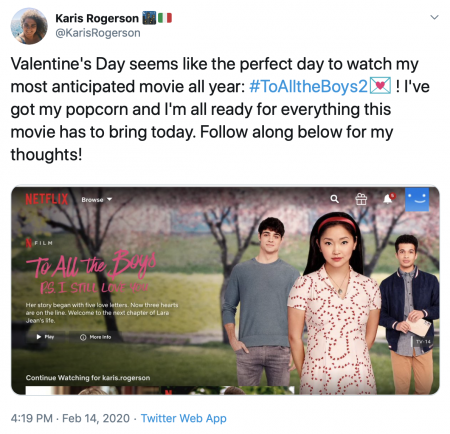 When I say I’m a fan of the To all the Boys series, I mean that I’ve read all three books twice, watched the first movie at least three times, and spent the year and a half since its release eagerly anticipating its sequel.

If you’re not familiar with the story of To All the Boys, based on the bestselling trilogy by Jenny Han, the first movie is a delightful rom-com about a girl and a guy who decide to fake-date for two separate reasons. Along the way they, of course, fall in love, and the world fell in love with their story when the first movie released in August of 2018.

The second movie, P.S. I Still Love You, is about what happens when Lara Jean and Peter start dating for real. It introduces a love triangle, there’s plenty of shenanigans and angst, and overall it’s a really adorable YA romance novel turned movie.

Something small that I really loved about this sequel was the way it represented the magnitude of every little thing when you’re a teenager. It’s interesting to be into YA as an adult, because I can look at so many of the conflicts that are earth-shattering for the protagonists and realize — that’s not going to be a big deal in a few years.

[Being into] YA as an adult, ...I can look at so many of the conflicts that are earth-shattering for the protagonists and realize — that’s not going to be a big deal in a few years.

But I remember when I was in high school, and my friend didn’t wish me a happy birthday at breakfast the day I turned 18. I assumed it was because she had decided to hate me, and so I didn’t speak to her the whole day as a result. By that night, I was a roiling mess of emotion, convinced that this girl who’d been one of my best friends for three years was never going to speak to me again. It was heartbreaking.

With the space of several years, I can look back and laugh at my dramatic antics, but in the moment? She may as well have stabbed me in the back.

So P.S. I Still Love You does this great thing where teenagers freak out over teenage things — like the fact that Lara Jean’s boyfriend didn’t actually write the poem he read her on Valentine’s Day; or that Lara Jean didn’t ask Peter (her boyfriend) to bring the pizza for their party, and it made it look like she was out there planning parties with another guy. It’s so not actually a big deal in the grand scheme of things, but when you’re 16, well, everything is a big deal.

These small details feel incredibly real and remind me what it’s like to be a teenager, that sometimes it seems like the world is ending over the smallest things, and it takes age and time and distance to gain perspective.

On a broader note, there’s a specific theme to both movies that I think P.S. I Still Love You portrays really nicely, and that’s the importance of opening yourself up to heartbreak in order to really receive love.

One of the central conflicts of this movie is a love triangle, and one of the main reasons Lara Jean even entertains the notion of the second boy is because she’s convinced her boyfriend Peter is going to break her heart. There are things she’s not over from his past, and she can’t get out of her head long enough to trust him.

This harkens back to the first movie nicely, which has multiple scenes where Lara Jean confesses that she doesn’t want to fall in love because people can hurt her, so in this second movie we see that “after happily ever after” things aren’t always sunshine and daisies.

Relationships take hard work, the movie is telling us, and sometimes you have to trust. You have to open yourself up to heartache in order to really experience the fullness of everything that life — and love — have to offer.

If I had one critique of the adaptation itself, it would be that it felt like it was trying to cram too much into too small a space. The movie is only about an hour and 40 minutes, but there are so many storylines and threads it tries to jam into that time that there were moments when it felt like we got cheated of some quality content, especially after having read and adored the book.

Obviously ample time was given to the main conflict — Lara Jean and Peter trying to figure out how to have a relationship that’s real, not pretend — but there were side characters that I wanted to see more of (Stormy!), sister shenanigans I could watch for hours, and moments with friends I wish had lasted longer.

Many writers talk about how writing the second book is the hardest, especially in a trilogy, and in some ways I feel like P.S. I Still Love You suffers from second-book syndrome and is a weaker movie than the first. Ultimately, though, it’s a highly-enjoyable, sweet movie and a great adaptation of one of my favorite books, so I have no complaints.

If you need me anytime soon, you’ll likely find me on Netflix, watching the movie over and over on an endless loop, crying because I love it so much.

I have read all three books twice, I love this genre. It is a pity that in life romance and love are felt differently. I was disappointed in this, now I am single and enjoy freedom. I use singles chat to communicate with the other singles. This is especially relevant now since public places are not the best option for dating. You never know when you will be able to establish a good relationship with someone who lives in your city, but with whom you have never met, and here is really possible.

Not a bad story, however, it does not reveal the difficulties of online relationships and dating. For example, it was difficult for me to find a person who would like my preferences. I like fetish and I was looking for such a partner. So I was extremely pleased when I came across a review of just such a dating site https://wizzlove.com/reviews/alt-review It's cool that they are now creating such thematic dating sites where you can find your partner.

Hello, it is important to understand that not everyone in our time wants a strong relationship, someone just wants to have fun and have a blast, so for such people I can advise hook up tonight and you will be pleasantly surprised by the result. So it only remains for me to wish you good luck with your relationship. It is important for you to understand what exactly you want to spend your youth on.

It is certainly good to know good dating sites where you can have a great time. However, it is also worth having information on how to properly communicate with girls in order to get your daily date. It is very important. Therefore, I would advise you to approach this issue more carefully. I have no communicating problems with girls so that I have a date with them and more than one. If you have problems with this then just be attentive, confident listeners and maybe read these tips https://blog.fling.com/how-to-get-your-next-date/ They are universal and will help you get acquainted easier online.

There are plenty of hottest women in the world, but there are also some guys who are trying to find one. Let's take a look at some of the most hot women in the world dating. These are all beautiful and talented. Some are even in relationships, while others are just looking for someone to date.