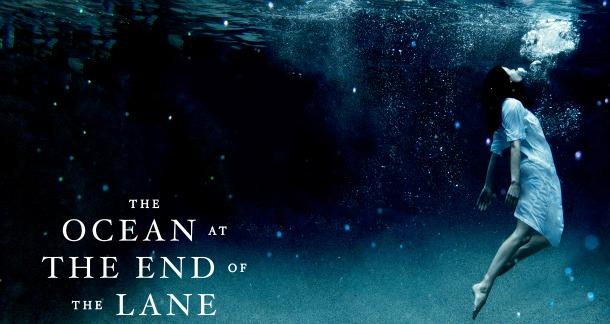 The Ocean at the End of the Lane is Neil Gaiman’s first adult novel since 2006's Anansi Boys. Ocean draws from Gaiman’s childhood, telling the story of a man who returns to the place he used to live on the day of a funeral. He finds himself at an old farmhouse looking out over a pond there and thinking how Lettie Hempstock, a girl he used to know, referred to it as “the ocean.” This precipitates a journey back through memory to a time when he was seven years old and first encountered Lettie and her strange family.

The “ocean” is something that is repeated again and again in the novel, and, of course, it’s a metaphor. Much of the heart of this novel is the adult looking back at childhood. To the child, it seems natural that the pond is an ocean, containing innumerable wonders. To the adult, it looks like a small pond. Size and scale, of both objects and events, change as we age.

This novel is sure to please many Gaiman fans out there. It bears many of his traditional elements: a young, quiet, bookish protagonist; magic that seems born of fairy tale and myth; three women (or rather two women and a girl) who aren’t what they appear to be; disturbing monsters; and, of course, sacrifice. Like some of his Sandman work, the numinous is presented alongside the mundane, the fairy tale in conversation with the family.

Novels aren’t always what we want them to be, but I wanted Gaiman to dig a little deeper here, to justify his “ocean.” What I ended up with felt more like the pond.

But because this is Gaiman, even the mundane isn’t ordinary. Due to financial woes, the narrator’s family starts taking on lodgers, including a South African opal miner who turns up dead one day of carbon monoxide suicide. This kicks off a series of strange events where people in the village receive money unexpectedly, but in ways that seem to poison their lives.

Lettie, who it soon becomes clear is not just a normal girl, shows our unnamed protagonist who is causing all of this, a creature seemingly made of faded and rotten rags who apparently found her way into our world. Lettie tries to banish this creature, but she tricks our narrator and hitches a ride inside of him, allowing her to cross over completely, becoming the babysitter, Ursula Monkton, who comes into our narrator’s family and starts to systematically dismantle his world.

Because this is an adult looking back through the eyes of his seven-year-old self, there remains the possibility that all of this is fancy, that this was how a young boy whose only solace was fiction rationalized the changes and upheavals in his life—a dead lodger, a strange nanny, a father’s infidelity. But because I’ve been reading Gaiman for years now, and because I’m a fan of fantasy fiction, I took everything at face value. Still, most of the fantasy is only visible to the narrator (even the strange clothes he’s given by the Hempstocks look normal to everyone else). It could all be the ideas of a young, imaginative child.

Ultimately, though, I was disappointed with The Ocean at the End of the Lane. There’s nothing particularly wrong with it—Gaiman’s output tends to be better than the average, and as mentioned it has his trademark feel to it—but that’s part of the problem for me. It felt like more of the same. I liked the fact that it’s an adult looking back at his childhood, but since most of the novel is about a lonely, bookish seven-year old it evoked previous works like The Graveyard Book. And while the three women aren’t necessarily the Fates, I’ve seen women like that appear and reappear in Gaiman’s work in the past. I found myself missing the mythological bounty of American Gods or the humor of Anansi Boys. That this was a personal story for Gaiman seems obvious; but it never became a personal story for me. Novels aren’t always what we want them to be, but I wanted Gaiman to dig a little deeper here, to justify his “ocean.” What I ended up with felt more like the pond.

The length doesn’t help in that regard, either. I’m all for slimmed down, tightened books (and am sick of bloated monstrosities), but Ocean is 178 pages in length. I finished the book in a day, and while it didn’t feel particularly inflated, its slightness of length helps to give the idea of a slightness of content. By the end, it felt like a novella, an extended short story more than a true novel.

The Ocean at the End of the Lane isn’t a bad novel by any means. Gaiman’s voice and prose seem as effortless as maybe they've ever been. I just can’t shake the idea that I wanted something...more. You will, of course, have to make up your own minds, and I’d be interested in what you thought. Feel free to tell me in the comments below.

I think you wrote a fanstastic review of Gaiman's latest work and I cannot agree more.  I wanted the novel to expand and grow, I wanted to know more about Lettie and her family, but as I kept watching the page numbers growing larger and the remainder of the book growing smaller, I knew I was going to be left wanting.

I hope Gaiman uses "Ocean" as a platform to begin writing for adults again.  I love his writing - it is so bad to want more of it?

I'm looking forward to reading the comments to see what others thought as well.  Although I finished quickly, I do believe this is one book I will be revisiting from time to time, and that's not necessarily a bad thing.

I enjoyed this novel a lot more than some of his previous ones. Although he repeated elements from his other novels, I feel like he refined them into perfection with this novel. I may be a little biased though, since I listened to the audiobook of it--that he narrated--while lying in my bed in a thunderstorm. In other words, I read it in the best setting possible.

huh. sorry it was more of the same, nothing exceptional. i was going to buy this, but maybe i'll just check it out of the library or keep an eye out for it at garage sales. great review, though.