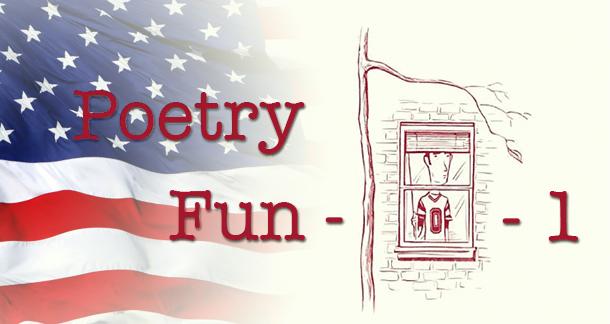 O say, can you read by the dawn's early light
What so proudly we hailed as a poem-turned-anthem,
Whose broad themes and bright lines through a rhyme scheme so tight,
O'er the airwaves we've heard before many sporting games?
And masses unaware there was poetry there
Gave proof through the night that their love was still there;
O say does that star-spangled poem yet wave
O'er the land of the free and the home of the brave?

Ah, poetry: it's in our blood as Americans, right there in our national anthem. That's right, "The Star-Spangled Banner" was taken from an 1814 poem by Francis Scott Key titled "Defence of Fort McHenry." The poem, written after Key witnessed British ships bombarding Fort McHenry on the Chesapeake Bay during the War of 1812, actually goes on for three more stanzas.

While poetry is not exactly the most popular form of entertainment in America these days, it still should come as no surprise that our national anthem is taken from a poem when we consider the country's proud poetic history. The earliest American poetry—or really I should say the earliest written American poetry, as Native American oral traditions date back many centuries—was little more than British poetry on vacation. Colonial and early post-Revolution poets in America took inspiration from the popular European trends and forms of their time. As the "New World" was largely colonized by persecuted Christians, religious refugees, and missionaries, much of colonial American poetry naturally consists of spiritual verse. A lot of this poetry is really boring, but certain poets were able to break free of their religious constraints and write genuinely interesting works. Massachusetts resident Anne Bradstreet (1612-1672) was especially talented at writing century-and-continent-spanning poems that are still enjoyed today, like "To My Dear and Loving Husband":

If ever two were one, then surely we.
If ever man were loved by wife, then thee.
If ever wife was happy in a man,
Compare with me, ye women, if you can.
I prize thy love more than whole mines of gold,
Or all the riches that the East doth hold.
My love is such that rivers cannot quench,
Nor ought but love from thee give recompense.
Thy love is such I can no way repay;
The heavens reward thee manifold, I pray.
Then while we live, in love let’s so persevere,
That when we live no more, we may live ever.

While Bradstreet is considered one of the first "New World Poets," she was actually born in England, as were many colonial poets. In those days, if you were rich enough to be raised in a home with a library, you were also probably raised in Europe, as America back then was mostly farms and woods. Phillis Wheatley (1753-1784) was another early American poet born overseas, but her life was a kind of cracked mirror version of Anne Bradstreet's. Wheatley was born in West Africa but was sold as a slave to a family in Boston before her tenth birthday. In fact, her name was taken from the slave ship that brought her to Massachusetts, The Phillis, and the family that purchased her, John and Susanna Wheatley. The Wheatley's children tutored Phillis, and she began to write odes and spiritual verses as a teenager. Over the course of the next decade, Phillis achieved unprecedented renown for her work. The Wheatley's took her with them to England, where a book of her verses was published, and she later met George Washington after having written a poem about him. Phillis died very young, at only 31, but not before she cemented her place as one of the founders of true America poetics. She was the first African American woman to publish a book and is frequently listed as one of the greatest African Americans in history. Not surprisingly, her poetry is still widely read today, and this stanza from "On Imagination" clearly shows why:

Imagination! who can sing thy force?
Or who describe the swiftness of thy course?
Soaring through air to find the bright abode,
Th' empyreal palace of the thund'ring God,
We on thy pinions can surpass the wind,
And leave the rolling universe behind:
From star to star the mental optics rove,
Measure the skies, and range the realms above.
There in one view we grasp the mighty whole,
Or with new worlds amaze th' unbounded soul.

Then there was a revolution, we broke away from Britain, yada yada yada...

Once America became the United States of America, that's when we really got into the poetic good stuff. The 1800s were huge for American poetry, as our men and women were some of the most celebrated writers in the world. Poets such as William Cullen Bryant (1794-1878), Ralph Waldo Emerson (1803-1882), Henry Wadsworth Longfellow (1807-1882), John Greenleaf Whittier (1807-1892), and Henry David Thoreau (1817-1862) wrote uniquely American works centered on the beauty of the continent's prairies, forests, and other natural features. It was Edgar Allan Poe (1809-1849), however, who really laid the groundwork for truly American poetry. Unlike many of his contemporaries, Poe eschewed the naturalism and transcendentalism championed especially by Emerson and Thoreau and instead chose to write morbidly Romantic poems, macabre mysteries, and some of the earliest known works of detective fiction. "The Raven" is undoubtedly his most famous poem, but many others were just as creepy (and just as influential), as the first stanza of "For Annie" shows:

Thank Heaven! the crisis,
The danger, is past,
And the lingering illness
Is over at last—
And the fever called "Living"
Is conquered at last.

After Poe came a slew of great American poets, but no two have been as influential as the late-19th-century pair of Walt Whitman (1819-1892) and Emily Dickinson (1830-1886). Their influence on American poetry is probably the only thing they shared, however. One grew up in poverty, preferred long lines and free verse, and traveled the country looking suspiciously like a transient; the other grew up in an affluent family, preferred short lines and rhyme schemes, and lived as a recluse looking suspiciously like a ghost. Whitman was a celebrated writer during his time and became friends with well-known authors of the day like Emerson, Thoreau, and Oscar Wilde, while the bulk of Dickinson's poems were published after her death. Between the two of them, they covered pretty much the whole spectrum of American life. Despite how incredibly different they were, however, both wrote beautiful poetry that is still studied and celebrated today. Whitman's Leaves of Grass is considered one of the most important works of American literature, while Emily Dickinson's collected poems inspired the modernists of the 20th century perhaps more than any other writer.

This is all getting a bit too essay-ish, though. The point here is that, although American poets initially borrowed heavily from their European friends, we've come into our own as a literary nation and now boast some of the most widely read and generally celebrated poets of the last two centuries. William Carlos Williams (1883-1963), Ezra Pound (1885-1972), T.S. Eliot (1888-1965), and E.E. Cummings (1894-1962) were at the forefront of modernism during the first half of the 20th century, while Alice Moore Dunbar Nelson (1875-1935), Langston Hughes (1902-1967), and Countee Cullen (1903-1946) led the way during the Harlem Rennaissance. On the other end of the spectrum, Robert Frost (1874-1963) led the charge in a return to conservative poetics and became immensely popular.

As was the case two centuries earlier, though, then there was a war...

After World War II, much of American poetry was divided into two camps: the Confessional poets, led by tortured artists like John Berryman (1914-1972), Anne Sexton (1928-1974), and Sylvia Plath (1932-1963), all three of whom eventually committed suicide; and the Beat poets, led by Allen Ginsburg (1926-1997) and some other people who weren't Allen Ginsburg. There were other groups, like the New York School poets and the Black Mountain poets and the ::insert regionally specific group here:: poets, but it often seems like people only ever care about "Daddy" and "Howl" anyway. To be fair, "Daddy" is really good, although half of that could be Sylvia Plath's haunting voice.

It's still too early to know exactly where the poets of the second half of the 20th century and beginning of the 21st will end up in the eyes of American literary history, but we've got a lot of greats to choose from. Gwendolyn Brooks (1917-2000), Charles Wright, Maya Angelou (1928-2014; RIP), John Ashbery, Nikki Giovani, Bob Hicok, Amy Gerstler, and dozens and dozens of other poets have been shaping the living shape of American poetry over the last few decades. It could really go anywhere from here. Slam poetry and spoken word have both picked up a lot of interest recently, as have haiku and other strict forms. There are countless regional and minority poets who write specifically towards a particular segment of the population, too, and many of those are beginning to earn recognition outside of their target demographics.

I don't have any thought-provoking final tidbit of wisdom to leave you with—I'm a poet, after all, not an essayist—but that seems fitting, as American poetry is something that will continue to grow with the nation, so there is no neat conclusion. It's as important today as it has always been, and it's not likely to go away anytime soon. Next time you hear the national anthem, think about how so much of what we love about America is wrapped up in this musical symbol, this sung poem. It may be that there's a poet out there right now who will pen the next great work of Americana, the next "Star-Spangled Banner" or Leaves of Grass or The Song of Hiawatha or North of Boston or Ariel or The Waste Land or "Howl" or "The Raven" or "This Is Just To Say." The rest of the world knows how spectacular our American poets are; I think it's time that more Americans knew.

I knew I recognized the type of post. Will read above.

I've actually started listening to my favorite classics on Spotify. Great stuff. I am wondering if the form is going to be more restrictive of the next few years, and whether it will have it's own healthy dose of fiber.