Organic Word-Growing: Why You Should Keep the Shit in Your Writing 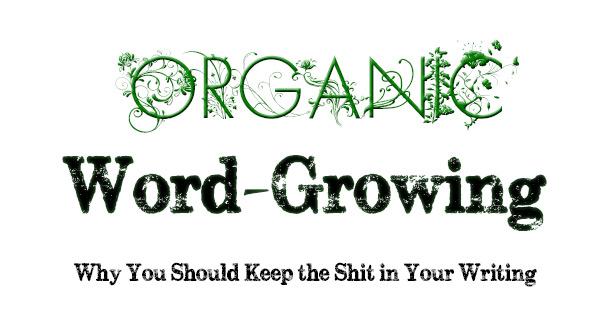 Many writers approach their text with the intent of keeping out every particle of shit. There are two drawbacks: First, this perfectionism inhibits creativity and the writing process; and second, writing that lacks the flaws naturally found in language will feel artificial. For many of us, our stories and the writing process improve when we embrace organic word-crafting, using the shit of our first draft to fertilize the drafts yet to come.

Every line must be perfect, the writer thinks. Even ignoring how this perfectionism leads to a writing process of halts and starts, perfectionists will still bump up against a problem: "Perfect" is impossible.

Every line must be perfect, the writer thinks. "Perfect" is impossible.

Words will never be able to capture "perfect," partially because language is an imperfect tool and partially because a book relies on readers and contexts that can't be fully predicted or controlled. But even if we assumed that the varying contexts and the tastes of readers didn't push the "right words" out of reach, perfectionistic writers must face another truth: They haven't even finished their story yet. Until you know the framework of your own story, it's impossible to know how well a given line will tie in to the story's overall objectives, texture, and tone.

And even if flawless foresight was a possibility, the constant stopping and searching for these ideal words slows down the writing process, activating analytical processes (a left-brained mentality of finding a "correct" response) while inhibiting creativity (a right-brained mentality based on intuition and a willingness to make mistakes).

Still need to be convinced? Check out Jon Gingerich's "Getting Over It, Getting It Out: On Embracing A Bad First Draft" and Max Barry's "The First Draft."

So you're slowed down by perfectionism, but maybe it's worth it to make a first draft that dazzles. However, I suggest that this sort of perfectionism doesn't only slow down your writing process: It  weakens the final product.

At a micro level (sentence issues, word choice, etc.), your first draft will---and honestly should---be lacking. That micro-level work is what the re-writing and editing processes are all about. But the macro level (story arcs, themes, etc.) isn't served by trying to craft a perfect first draft. Rather, the macro level gets damaged by the mechanical process of perfectionism.

This is due in part to our limitations as writers. As we hyper-focus on the micro level of our work, we lose sight of the big picture, unable to see the forest through all those damn trees. Beyond that, many of us don't know what we're trying to write until we've written it. Our sense of themes, characters, and stories are fluid parts of the writing process, and as we stumble forward we often reach a point where we say, "Ah, yes. That was what I was trying to say."

The exhaustive, perfectionistic approach prevents many stories from ever being finished. We give up on the project before we get a sense of the story's potential. The wiser path is to finish a shitty first draft before occupying our time with the details. It may be the story is terrible (something many writers realize only after writing "The End"), in which case you've saved yourself a lot of time by putting off the micro-level work. Or the story may be the best you've ever stumbled upon, in which case that knowledge will bolster your motivation during the rewriting process.

Embracing the Limitations of Language

The wiser path is to finish a shitty first draft before occupying our time with the details.

When a writer can't translate the world in their head to words on the page, it's tempting to get stuck in a search for the "right words." There are several ways to cope. One is to write a note to yourself so you can come back later and fix the issue. Another is to quit writing because it's too damned hard. But I suggest a third option: Write the wrong words.

If you're struggling to express something, imagine how your narrator or character might try---fumble though they might---to explain the idea to someone. If you write it and think, "No, that's not right," I have a next line to suggest: "No, that's not right." Then proceed with the next attempt at description.

Often, a wrong idea that's continued leads more naturally to the right idea than an idea re-started over and over in the hopes of getting it right from scratch.

Once you've written your story in its organic and imperfect form, you can always go back and change the parts you don't like. However, there's a lot to be said for keeping some of these "wrong words" in place.

Like a painting where you can see the reflection of a fictitious photographer in the background glass, you can hide yourself by leaving yourself visible; a humanity is revealed and the fabrication of the painting is hidden. Or, to pull a more familiar example, in the film version of Chuck Palahniuk's Fight Club we find this simple "mistake": "No, wait. Back up. Let me start earlier."

The natural flow of your thoughts as you attempt description adds a conversational and relatable tone, while having imperfections lends your prose a level of humanity by sheer virtue of being imperfect. If stories are meant, at least in part, to capture the human experience, then these foibles and miss-steps are part of effective storytelling.

Some believe that the purpose of writing is to be different from real experience---to distil the most important elements without the hindrance of human shortcomings. It's certainly true that some successful writers chose an artificial tone of voice that simultaneously made points more clear and direct. However, clarity is not mutually exclusive with organic prose.

You can use this naturalistic prose or dialogue (as I discuss in my article "9 Tricks for Writing Organic Dialogue") as a way to express yourself more fully; clarity can be more challenging, but it's certainly attainable. And for those writers who prefer to avoid human faults in their work, it's always an option to cut out the shit during re-writes.

I really love this article. It took me a long time to learn to keep the shit.

I really needed this article today. Thank you.

Indeed.  This was probably exactly what I wanted to read as I work my way through the 3rd attempt at this shitty first draft.  Let's get it done!

Just what I needed. Thanks!