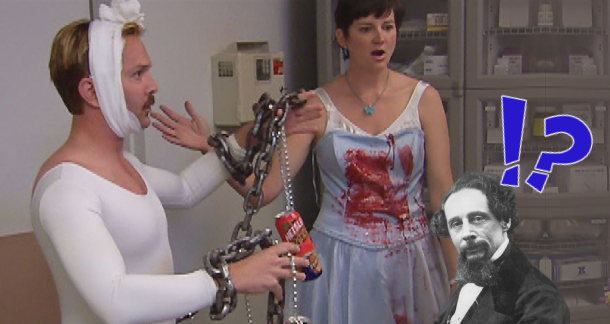 When it comes to Christmas stories, there is nothing new under the mistletoe. Year after year after year, we are bombarded with tales of respect for humankind, family togetherness, redemption, and miraculous snowstorms that move in at 11:59:59 on Christmas Eve. (In fact, Hallmark Channel is airing 40 NEW Christmas movies this year!) It’s as much a part of 21st Century Christmas in the United States as online shopping and blow-up lawn Santas.

Aside from the ORIGINAL Christmas story (you know, with the baby Jesus and all), there is one story, in particular, that started it all and provided the structure for what we recognize as a "Christmas story."  A Christmas Carol, first published serially by Charles Dickens on December 19, 1843, is the basis for most of the Christmas stories we consume, but it has also generated hundreds of its own iterations.

You know the plot. Ebenezer Scrooge: rich, old, and greedy, gets a visit from the ghost of his dead business partner, Marley. Marley tells Scrooge to get his shit together, or else Scrooge will be doomed to wander eternity weighed down with chains. Scrooge tells Marley to get fucked and he goes to bed. During the night, Scrooge is visited by three ghosts: the Ghost of Christmas Past, the Ghost Christmas Present, and the Ghost of Christmas Yet To Come. Each spirit shows Scrooge what a failure he has become at life. By dawn, the old man has a complete change of heart and buys all of London new iPads. (Ok, the last part I made up to see if you were still reading.)

I don’t care if it's about puppets or ponies or figgy pudding, I will watch or read [almost] any retelling of this staid old fable.

Every year, the story comes back to haunt us, sometimes as a faithful retelling, but just as often as a derivative version…And I am here for ALL OF IT. I don’t care if it's about puppets or ponies or figgy pudding, I will watch or read [almost] any retelling of this staid old fable. So, I thought it would be fun to try to find as many versions as I could and put them into this article.

I spent a few hours just writing down all the versions I know, but as soon as I sat down to Google the details, I discovered Wikipedia already has an exhaustive list published. (Of course…) And the list is even more insane than I could have imagined. According to the article Adaptations of A Christmas Carol on Wikipedia, there are 347 adaptations of the story. 347!!!! Those adaptations include, theater production, operas, ballets, movies, musicals, animated features, television specials, radio programs, episodes of popular animated and live action TV shows, graphic novels, and even a video game! I had no idea there were so many versions!

So I culled the list, plus added a few that didn't appear in the article. Thus I present to you, 40 versions of  A Christmas Carol I either knew of or have seen, plus a few outliers that seemed interesting or entertaining. They are mostly in chronological order from 1853 (the first performance after the publication of the book) to 2020. I have put an asterisk on all the versions I’ve seen.

Not counted in this list are the hundreds of stage versions put on by theater companies every year. These performances are generally faithful to the original story, though, no doubt, full creative license taken by the directors and actors of those productions. Also not counted are the thousands of references made to the Dickens story that appear in other stories.

In fact, it was while I was watching old episodes of Reno 911! that I had the idea to write this article. In Season 5 episode 15, Lt. Dangle dresses up as the Ghost of Drunk Driving in order to scare teenagers straight by telling them drunk drivers go to hell. He’s dressed in a white body suit with chains and beer cars all over him and a sash tied under his chin, Jacob Marley style. This is just an allusion—a fucking hilarious allusion—to the story, not a retelling. So while that version doesn't count, it's still yet another way in which Charles Dickens story appears everywhere.

Get some version of A Christmas Carol at Bookshop or Amazon

Nice column. Thanks for sharing and keep us up to date.

You can also go through this: