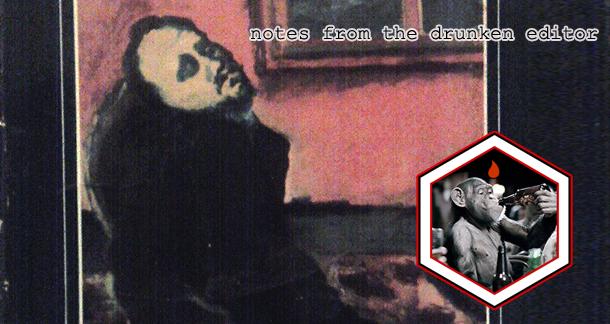 I've just returned from the 2013 AWP conference in Boston. I met many writers, many publishers, and many people who would like to be writers and are looking for publishers.

Originally, I wanted to write about AWP in detail, but after thinking about it, I realized there would be many better and more helpful articles popping up around the web. What I'm not sure you'll find so easily is a breakdown of the kinds of people one is likely to meet at such a busy event. There were thousands of writers at AWP this year. I talked to a lot of people. Most were wonderful; some, in the five or ten minutes it took for me to get away, were just insane.

If you're talking to someone whose profession involves dealing with people in your position, you're better off not kissing their ass. Everyone else does.

I've written before about some of the weird behavior writers adopt that can be a warning sign to potential publishers, but this time I'd like to focus on specific personality traits that will be off-putting, not just to editors and publishers but to everyone in the world, ever.

You're going to be talking to human beings: petty, distracted, flawed, sometimes stupid, often smart, emotional, linguistically capable monkeys. What you say on the page can be as brilliant and brave as you like, but when you interact with people, you need certain social skills that go beyond being able to say hello and laugh at jokes.

So here's my list of characters you may meet, in your daily life and in high concentration at writing events, that you should never become, unless you want to be written out of the big story.

I wish I could publicly quote from the email a colleague received a week ago from someone whose non-fiction book he'd rejected. It'd be poor practice to quote the whole thing, but here are some of the gems it contained:

Perhaps you don't quite see why such emails are turn-offs. They're personal, vindictive, creepy, childish, and they make you sound like you wrote your manuscript with your grandmother's blood. Which she willingly gave you, because it must have taken a few generations to create someone as insane as you.

Antidote to this poison:

"Don't be a dick" won't always work here, because if you're writing this kind of email, what you need is to be taken away somewhere, not given lessons in social manners. But if you're not already out of your mind — don't be a dick.

Without wanting to sound mean, I think it's important to say that just because you're friendly and polite, you're not guaranteed a contract with a publisher you meet. At AWP I met two people in the space of about an hour who qualified as Really Nice Writers Looking For Advice. Then I met a couple more that day. Such nice people.

Actually, the world is full of Really Nice People looking for advice on publishing. They don't just gather at AWP. But you quickly learn to detect something phony about the kind of niceness that some people display. My test, when I suspect someone is being an ass kisser, is to mention how I'm glad we've stopped taking submissions for the next couple of months, because the work load was getting crazy.

How the niceness fades — if the smile doesn't outright die, it freezes. The dynamism of the person's facial expressions disappears. You can read their thoughts: "Damn it, I can't ingratiate myself with this one."

It's nice that you're nice, but most people are not good actors. If you're talking to someone whose profession involves dealing with people in your position, you're better off not kissing their ass. Everyone else does. They have seen it before. They won't want to publish your book — or push it to the top of their slush pile — just because they were taken aback at how lovely you are. They won't go home thinking, "Wow, of the 12,000 people I met at that conference, I'm really fascinated by how decent that one guy reading this LitReactor column right now was! He really wants me to read his manuscript, but he also loves our catalogue, and the way our logo was designed to look like a snake or a wave, and the way my eyelashes curl upwards more beautifully than anyone else's!"

The lazy bastard who soaks up advice without using any of it:

"Hey, I'm writing a book. Please tell me what I should do."
"Well, I don't really have time to give you a full tour of the publishing world."
"Any advice is good."
"Okay. Write every day, or at least establish a routine that you can keep up. Be critical of your own work. Don't be in a rush to submit things."
"Thanks! Rock on," and the lazy bastard who just got some of the best "foolproof" writing advice you are likely to get from most authors, this lazy bastard who wants a magic ticket to publication, just walks off to the bar, where he spends the night drinking, telling people he's writing a book, and fails to digest what's he's just heard.

You do not need all the writing advice you read. If you are not "critical of your own work" then you can start there, by actually trying to be critical — by stepping back and reading your writing as though you were someone who disliked you, someone who didn't have to take your feelings into account. If you are not establishing a writing routine, work on that. You will get to know what writing is that way. You don't need to keep seeking out advice "about writing" if you're actually taking the good advice you get.

Do you, perchance, recall any bits of advice that keep coming up in very different contexts? Put all that advice to good use. Don't ask other people for "general tips" if you haven't figured out what your "general way of working" is.

Think of it this way. If you're going to a doctor for a check-up, anticipating nothing in particular, you're at the mercy of what he finds. Usually, that is nothing much. (At least you paid him.) But if you have a raging throat infection, or you've just accidentally cut off your big toe, then you are going to need the particular expertise of someone who knows better. Whether you go for a check-up is up to you, but going to a specialist is a much more specific (and often helpful) process.

If you're just asking for advice from people who've, like, well, done stuff with their writing, you're getting a check-up without a clear idea of what you want. If you have an actual problem, like an extremely weak resolution to the crime story you're writing, a weakness that stems, according to your own diagnosis, from an implausible motivation early on in the story, then seeking out help is going to be helpful.

The pedantic conversationalist who would like you to know every single plot twist in his novel:

This is a pretty easy problem to solve, but it's important. Sometimes you can be making a decent impression, then, without realizing it, you start to appear socially idiotic when you talk about your book for way too long.

All writers have done this. It's just that some do it way too often, and they take it to extremes every time.

3 pm:
"What's your novel about?"
"OH, WELL, WHERE TO BEGIN. Okay, so it's like a genre-blurring story that takes place in Africa in the 22nd century, when all of humanity has been enslaved by junkies from Planet Shrombovastan. For the last fifty years, a rebel faction has been trying to overthrow the junkies…"

3:40 pm:
"Now the twist in this chapter is that you, the reader, would be ABSOLUTELY convinced that the butler did it, because that's what the clues point to. But it turns out that the 3rd Overlord is ACTUALLY a good guy, and he's been framing the butler for a noble reason! The butler is the same robot that the other guy built back in Book 2!"

4:05 pm:
"Oh, I gotta go… man, I was just getting to the good part. Hey, what's your email? Let me send you the manuscript, that way you don't need to be TOLD the story, hahahahahahaha! Good to meet you, man."

Think of the elevator pitch idea: that you should be able to sum up your product or job position in the time it takes to ride an elevator. That will force you to condense your masterpiece into something people can listen to without growing suicidal.

Your novel may be beyond summary, but the people you meet are not beyond boredom.

The liar who's going to lie until the lies become truths:

Some people lie so much that their fiction is only an extension of their daily lying. Although I've only met a couple of writers who lie about everything for no good reason, I also find them the most unpalatable of all. If you're that dedicated to bullshit, you should be writing some serious masterpieces.

But you don't need to be a compulsive liar to need an honesty check.

To take a mild example:

Saying you're almost done with a project when you've actually just forgotten all about it is stupid. Rushing to finish a piece in 24 hours when the deadline could have been extended may feel like you're just saving face, but your final text will probably suffer. I say this as someone who hates working to deadlines and occasionally screws up — if you have an excuse, use it, but otherwise, either admit you screwed up, or don't offer a crappy excuse. We are all equipped with antennae that detect this kind of thing.

Committing to telling the truth in the writing world (aim for: most of the time at least) will make your life less horrible in the long run. You won't have to remind yourself of your lies, which means you won't worry about it instead of worrying about your writing.

Remember the great, dead Flaubert's words, which have been quoted so often it's probably a faux pas just to quote them again:

Be regular and orderly in your life like a bourgeois, so that you may be violent and original in your work.

Let's adapt it to: Be normal and not crazy in your life so you can get freaky in your writing in a way people will care about.

Notes from the Drunken Editor: Forging Your Own Independence

I don't think I'll have a problem with the last one as I'm a terrible liar.  Everything else I will keep in mind when I go to the Philadelphia Writing Convention in June.  Hopefully I will learn something and not make an arse of myself as this is the first time I've gone to one of these things.

Great column, crazy people are (mostly) so amusing in retrospect :)