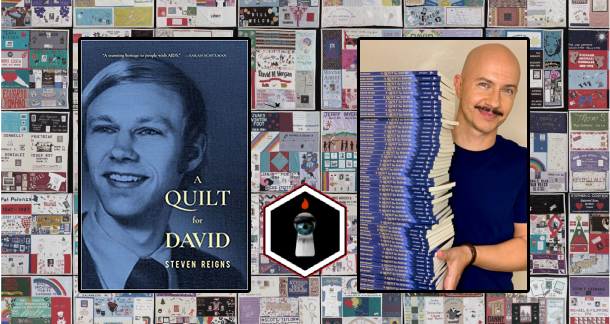 Quilt image via the Smithsonian, Author Photo via Twitter

As a culture, we’re obsessed with news. We doom scroll through repeated facts and conjecture, absorbing the shrieks of the chorus, constructing a hierarchy of information based on whoever shouts loudest, and first. Then we move onto the next novelty, leaving the old one to rot, often uncorroborated, half-told, sometimes outright wrong. As time passes, the falsehoods masquerade as history, a narrative woven from reports we half remember half reading.

Like the one about the virgin who got AIDS from her dentist.

Poor girl. What an evil guy.

We half remember half reading that in the early 1990s, before we knew the nitty gritty of HIV transmission, before the CDC put her claims under a microscope and found them scientifically implausible. The truth wasn’t as interesting, and it came years later. The frenzied and flawed reporting of the initial news cycle stood.

Is it possible to correct the record? After thirty years have passed, how do you make people care, remediate their own false memories? How do you change old news, reclaim a maligned man’s legacy, challenge a narrative that has ossified into stone?

In the 4th century BCE, Aristotle argued that “poetry is something more philosophical and more worthy of serious attention than history.” He suggested it was a better vehicle for conveying “universal truths” than historical prose, which is mostly concerned with relaying “particular facts.” He believed poetry allows for contemplation, introspection, the drawing of analogies, cathartic release and that purely historical prose cannot compete. So it’s fitting, then, that in the 21st century CE, Steven Reigns uses poetry to excavate the universal truths present in a tragedy which played out in Florida in the early 1990s.

In the preface to his new book, A Quilt For David, about the dentist at the heart of the controversy, Reigns says:

Poetry wasn’t just my beloved form of writing; it felt the best way to assemble the sparse information that existed without adding speculative details... Poetry and poetic language compel our emotions. What if, through poetry, I could offer an equally empathic and compassionate view...?”

This poetic odyssey through the events of 1986-1990 resists easy classification. It’s a true crime investigation, based on a decade of on-the-ground research in Florida. It’s a shared remembrance, reflecting the experiences patients shared with Reigns when he worked as an AIDS/HIV counsellor in the late 1990s and early 2000s. It gives cultural context, considering the story of Typhoid Mary, who infected the clients she cooked for without understanding how. It’s an emotional journey, pondering what David, described by those who knew him as quiet and kind, might have felt as his illness progressed.

It might all have been a simple, sad cliché. At some point during 1986, Florida dentist David J. Acer was infected with HIV by one of his sexual contacts. As a public facing member of his small, conservative community, he kept his private life buried deep in a closet all too typical of the time. He discussed his diagnosis only with his doctors and carried on as normal. Eventually, inevitably, the disease caught up with him. He developed Kaposi’s sarcoma in his mouth, skin lesions, weight loss. When his symptoms overwhelmed him in 1989, he sold his practice, came out to his parents (who nonetheless came to care for him), and finally entered the West Palm Beach hospice in the summer of 1990 knowing he’d never return to his home, his boat, his spaniel again. He was 40 years old.

Like so many other AIDS victims of the 1980s, David’s story could have ended there. A quiet life cruelly truncated. But as he lay dying David learned that one of his patients had accused him of infecting her with the virus. Horrified, he wrote:

I am a a gentle man, and I would have never intentionally exposed anyone to this disease. I have cared for people all my life, and to infect anyone with this disease would be contrary to everything I have stood for.

He meant his words as a full rebuttal of the terrible thing he was supposed to have done. It didn’t matter. He — or rather the void he left behind him when he died in early September — was about to become the eye of a media storm.

His accuser was Kimberly Bergalis, a college-aged woman who claimed that, despite her virginity and wholesome lifestyle, she had been diagnosed as HIV+ in March. It was 1990, when the original framing of AIDS and HIV as ‘the gay plague’ had expanded into ‘the curse on homosexuals, the promiscuous, and drug users.’ AIDS and HIV represented the penalty imposed by a wrathful god for sins such as visiting sex workers, sharing needles, or having rough penetrative sex without a condom. The hospice bed was the last stop on the road to Hell.

We like to think that the truth comes out eventually, that given time, the moral arc of our universe bends towards justice, not away.

A nice Catholic girl like Kimberly was meant to be safe from such damnation. The same went for David’s other accusers, most of them represented by the same lawyer, sniffing sweet sweet malpractice funds. He made a folk devil out of David. His clients stood up in front of the media, proclaiming their innocence, their martyrdom, glossing over their secret histories of blood transfusions, addiction, fumbling in cars with bad boys. The story they told for the cameras became the story, of a sloppy, arrogant dental practitioner whose poor hygiene dragged his irreproachable patients down into the moral mire, condemning them to certain death. Murderer! No one spoke for David, so their side of the story stood, the flames fanned by their lawyer and crusading bandwagon jumpers like Senator Jesse Helms.

It’s an old maxim, if a picture is worth a thousand words then a picture of a young, attractive white woman is worth a million. That picture, her picture, packs the punch beneath myriad headlines. She’s the literal poster child for a narrative that twists on without her input. She’s usually the victim, not the protagonist, rarely the final girl, merely the tool of a moral panic used to exacerbate existing socio-political divisions and to justify future increases in social control. Within the news coverage of the time, it became Kimberly’s story, the virgin-martyr, the thoughtfully-styled face gazing from the cover of People magazine, celebrated in a stage play, as a statue, a beach named after her. Within the heat of the news cycle, it became impossible to see past her.

As her image faded to sepia however, the moral panic abated and more analytical thinking prevailed. CDC studies of the virus that killed David and the one that killed Kimberly just over a year later suggested there was no straight line between the dentist’s hands in her mouth and the infection in her blood. The same went for the other accusers. David, it seemed, had little in common with his patients other than they bore the same burden of a misunderstood disease. He was never the folk devil. He was just another victim.

A Quilt For David chronicles the story in the same way Leonidas might have done. Reigns’ poetry ripples down the page, exploring not just how David might have felt in a given moment, but also how the other players, family members, patients, employees, friends, experienced the drama. There is so much compassion in these pages, for all involved. By 1990, any death from AIDS should have been preventable, virgin or whore. The fracas surrounding David was unnecessary, rooted in homophobia, unjust.

Everything dies too soon, is
taken away too soon,
every son
is taken away.

Reigns' poetry is interspersed with pithy prose, short paragraphs that mine the pain and pity as effectively as the verse. As with any tragedy, there are elements of farce. Kimberly, and another Acer accuser/patient, grandmother Barbara Webb, attracted universal sympathy, while thousands of gay men suffered, ignored:

Before the cocktail, when the virus kept multiplying like gremlins in the body. Before unfounded faith was put into AZT, Kim and Barbara were inundated with offers. Lemonade, aloe, barley, yams. Super-heating blood treatment. People wrote, called, and dropped by unannounced. As gay men died alone in hospices, hospitals, and homes across the country, people wanted to save these two women.

Much as a documentary lays bare truths through the sequencing and accumulation of images, these snippets of poetry and fragments of prose build a chronology. How David became infected, how he suffered, died, how those that followed tried to cast blame, how they too suffered, and eventually died, and how the dying didn’t stop, how concentric circles of hopelessness, misery, suicide claimed other lives— and how we should pay attention, learn from this, prevent needless repetition of past mistakes.

I’d sew a quilt for you.
I would grab a needle,
put the thread in my mouth,
moistening the fibers together.
I’d pierce into the eye.
I’d hem, backstitch, side stitch
a remembrance of you.
I’d put your name in large letters
wanting no one to forget you died of it
too.

Our current pandemic has triggered a degree of retrospection about our previous experiences with a virus that swept the globe. Russell T. Davies’ It’s A Sin electrified viewers on both sides of the Atlantic last year and A Quilt for David is in a similar vein. It relays a bleak time, but there is hope. Eventually, it gets better. Many—although not enough—of us are still here, still testifying. We like to think that the truth comes out eventually, that given time, the moral arc of our universe bends towards justice, not away. It needs help, though, and books like this push us in a better direction. Read it and weep.

THANK YOU TO ALL WHO HAVE READ AND ENJOYED 'LURID' OVER THE PAST DECADE. SO GRATEFUL TO BE HERE FOR A TENTH ANNIVERSARY EDITION! XO

Get A Quilt for David at Bookshop or Amazon

LURID: Get Your Motor Running — Bad Boy Bikers in Fiction and Memoir

Today we will show 5 intriguing Korean series that slotxoth people must watch, don't miss it since it will go out of style, and chat to him about pgslot.