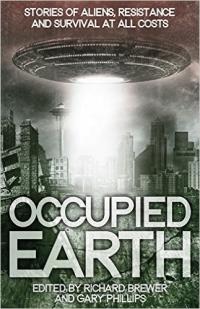 Wonder what Earth would be like after the Aliens take it over? Winner gets a copy of Occupied Earth: Stories of Aliens, Resistance and Survival at all Costs, an anthology of stories edited by Richard Brewer and Gary Phillips with stories from some of your favorite sci-fi and mystery authors—including our own Rob Hart.

For years, writers and filmmakers have speculated about the possibility of the Earth being invaded by aliens from another planet. But what if the aliens have been watching us, infiltrating us via human collaborators, or even surgically altering themselves to look human?

Occupied Earth is a groundbreaking anthology that explores the idea of what the world would look like years after its conquest. 20 years after a successful invasion by the Makh-Ra, humanity still exists, only it has become subservient to a race of occupiers who govern the devastated planet. But, as much at things continue with some sense of normalcy, something has happened in the Mahk-Ra’s empire. Earth, once considered a strategic beachhead of major importance to the Empire, has been downgraded in its value. Things are starting to degrade. Our planet is the last place any self-respecting Mahk-Ra officer wants to be assigned. Yet, despite everything, life continues.

These stories bring us face to face with annihilation — and show how we can pull ourselves back from the brink. Featuring Rachel Howzell Hall, Lisa Morton, Matthew V. Clemens, Howard Hendrix, Nathan Walpow and more, OCCUPIED EARTH is coming. Stay safe. Stay strong. Survive at all costs.

Write a holiday-themed flash fiction (25 words) that imagines what Christmas, or Hanukkah, or Kwanza, or St. Lucia Day, or Solstice, or Boxing Day, or New Year's, etc. would be like after 20 years of alien occupation. Are there still lights, trees, songs, candles, feasting, gifting, stressing, sappy movies, etc? Are there new alien-approved holidays or holiday activities going on? What are they?

Have fun with this! I can't wait to read the entries!

And the Winner Is...Christopher Peterson

Well another solid showing! I had to pick this one because I love the title. Merry Happy New Everything, you al!!!

"Every Time an Alarm Rings, an Alien Gets His Antennae."

They came hopefully after watching Capra's classic in syndication for decades. When they realized it wasn’t real, the invasion began. Merry Christmas, Planet Bedford Falls.

They still look like giant roaches to me. Hearing them awkwardly sing Christmas carols is hilariously repulsive. Experiencing culture, humans would call it.

Christopher Peterson from Illinois is reading the tea leaves... December 2, 2015 - 12:33pm
"Every Time an Alarm Rings, an Alien Gets His Antennae."


They came hopefully after watching Capra's classic in syndication for decades. When they realized it wasn’t real, the invasion began. Merry Christmas, Planet Bedford Falls.

Since war's end, we line up. Little children in a world without sky. Integration, the invaders say, helps everyone. We don't tell them it's fruitcake.

The Uberlordi adapted to our customs well.
The fir trees were delicious.
The ritual exchange of little boxes delighted them.
Here, Humanity found purpose.
Content.

We still smiled when christmas came around in the labour camp.

The festive weaponised traps they set for Santa would always be funny to us.

His second coming wasn't what we expected.

Twenty years after the invasion his birthday celebration was still mandatory.

At least the fruitcake was heavenly.

You're Jewing it Wrong

"I celebrate Hanukkah," Deanna responded, adjusting the sights on her rifle. "But their blood is festive, nonetheless."

‘Twas the night before Xmas…

When all through the earth and skies,

Not a creature was stirring

Everyone was filling for the aliens’ mince pies

"Yum! I'm going for that one." The alien-secretary whispers aside.

They just needed a place to crash until they could get back home.

They set their phasers to JOY! PEACE! MERRY!

We were all stunned!

I try not to touch the walls of my tiny metal living quarters, as my VR set initiates program 0235: Pre-invasion Christmas.

Christmas 2035: Santa-suited rebels spiked the drinking water with eggnog, the only substance lethal to our alien overlords. Peace, goodwill and victory to all men!