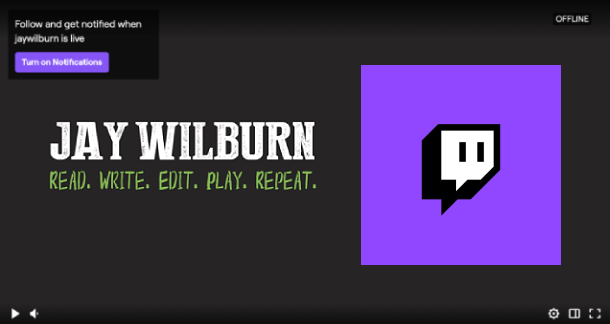 The Twitch template allows livestreaming of videogame play for an audience while the gamer talks to those watching. The translation of that idea from gaming to writing is not a clean and perfect one-to-one fit.

I should clarify. There are a lot of authors on there playing and watching other people play videogames. There is a small fraction of those using it specifically as an author platform with writing content.

Twitch is primarily but not exclusively a platform for livestreaming videogame play for fans to watch and support. This is the vast majority of the content on the site. There are a range of other types of activities going on, often under the categories of IRL (In Real Life) and Just Chatting. There are far more visual artists and musicians than writers. Writing doesn’t even have its own official category yet.

We could list off countless areas where early adopters did well and the rest of the industry chased the trend.

Software such as OBS Studio or StreamLabs allows you to create scenes. These can include banners such as “Starting Soon,” “Be Right Back,” or “Thanks for Watching.” They can include your camera view. You can show your computer screen along with a camera view of yourself in the corner of the screen as you talk. You can pull web sources, create image slideshows, and more advanced scenes for your livestream. There are plenty of tutorials online and, as with anything, you have to work with the software to learn how to use it.

There are community standards that include no nipple showing, no bullying or harassment, no racial slurs, no cheating, etc. Top earning streamers have gotten banned for life for rule violations.

Money can come to streamers in the form of donations, in-site currency known as "bits" that viewers can purchase and give to their favorite streamers who exchange them for real money, ad revenue, and subs (subscriptions). Subs range from $4.99 on up. Streamers get half of that sub money. Often subscribers are offered certain perks including ad-free viewing.

Anyone with Amazon Prime can automatically sign up for Gaming Prime (formerly Twitch Prime). You get one “free” subscription to any affiliate or partner channel of your choice and can renew or change that free subscription each month. The streamer gets paid for that sub. There are also in-game perks and loot. If you are a streamer with Prime, your videos stay up on Twitch for 60 days instead of the two weeks for other non-affiliates.

That’s an overview, but is sort of beside the point. All that comes from creating content that gets you to those levels, and that can take a while even for gamers who are quite popular. What does that process of content creation look like for authors? 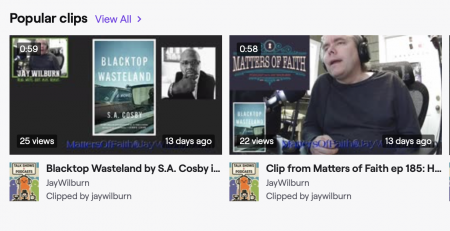 What I’m Doing with It

The only game I know how to play in Minecraft. Everything I know, my eight-year-old taught me. I stream playing Minecraft on Thursdays now. It’s not what I mostly do though.

I would have never considered Twitch if it weren’t for Brian Keene, who isn’t even on Twitch. Kind of a do-as-I suggest-not-as-I-do sort of situation. I follow his Patreon page and he got my attention in the middle of an essay when he said something to the effect of, “If I was ten years younger, I would be on Twitch as a author platform before anyone else figured out how to use it. Some authors are using it, but very few.”

I started exploring and found a near void when it came to authors using Twitch. Very little guidance specific to writers online, either. I went back to Keene and asked him how he would use it if he were ten years younger. He said he would basically use it as a more interactive YouTube — readings, Ask Me Anything chats, live discussions and panels, etc. So, I was off trying to figure it out.

When I first started, I only had my laptop, one screen, the laptop camera and microphone. There was lots of freezing and lag, but I made a few videos. Then, my laptop camera died.

I had to make a decision about whether to invest in real equipment to stream properly. Could I justify the cost? With the pandemic on, there were more online conventions so better cameras and processing for live video could help. It was ultimately the ways the quality computer, monitors, webcam, microphones, and so on could enhance the other platforms I already used that convinced me to go for it. I’ll get into that enhancement potential in a moment.

I’m on Twitch doing writer stuff now, but I am no one. As of the time I am writing this, I have fewer than twenty followers. I’m still figuring it out and practicing with what Twitch can do as an author platform. You can see what I do with it on my channel at Twitch.tv/JayWilburn, and feel free to watch past videos or jump onto the next livestream. Steal my ideas, make them better, and leave me in the dust. My curiosity lies in seeing what other authors might be able to do with it because at this point in the history of Twitch, I feel like I’m playing in largely unexplored territory for writers. I’ll share a few things though.

The simplest thing I do is put a story up on the screen and either read it or read it as I’m editing it and talk about the choices I made. I do something writing related on Tuesdays and Fridays each week for sure at this point.

This may be the most unnatural thing I do in terms of the writing process — writing while people watch. A few other writers on Twitch do this. They’ll host writing sprints with other writers and then talk about writing between those sessions.

What I do that I believe is unique is that I read the story out as I’m writing it and will write a short story from beginning to end live and from scratch. I think that is outside the realm of what most authors can do with their current skillsets, and I’ve gotten the most response from this. People come on chat and ask me questions and I pause from writing to answer them. I typically complete a 2000 to 3000 word story in about 2 to 2 1/2 hours with people stopping me to talk.

I tried it as a gimmick and thought it would turn out to be unwatchable performance art, but it turned out well and I’ve done it more than once. Check out the videos! It’s like patting your head and rubbing your stomach while trying to type, but turns out I’m pretty good at it. It is not ideal for writing most of the time, but I have had people go buy books after streams.

I already had a podcast. Sometimes it’s just me talking. Sometimes I have interviews. I’ve successfully livestreamed the recording of podcast episodes both alone and with a guest giving me audio and video recordings of episodes to promote. There are a number of podcasters using Twitch.

I play Minecraft on there. With help, I’ve created models of scenes from my books on Minecraft and then streamed a tour while talking about the books. I’ve just played the game and talked about writing and answered questions while playing. 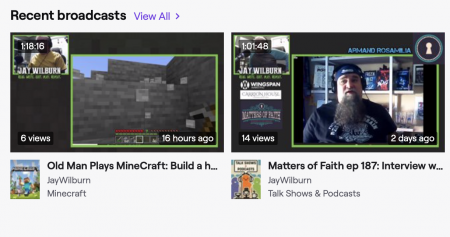 What I’m Thinking About Doing Next

Because National Novel Writing Month is not stressful enough, I’m going to live stream my NaNoWriMo writing each day on Twitch in November of 2020. At least the first 50,000 words will be produced all live!

With reasonable breaks, I’m going to stream for 24 hours writing as many short stories as I can. Probably in January of 2021. If I survive, then I’ll plan February.

How Twitch Enhances Other Platforms

If no one was watching, because sometimes no one is, the content creation on Twitch would still be worth it for me. I’m getting better with practice. My videos and transitions are getting more professional. I’m adding more elements in. More importantly, the platforms I already use are enriched with quality content feeding up from Twitch

Any livestream can be uploaded directly from Twitch to YouTube. Videos that are hours long can be broken into 15 minute segments or uploaded all in one without using any processing power from your computer. Every time you stream, you can have a video for YouTube. You can use the software to record videos without streaming for YouTube exclusive content. There is far more potential for videos with visuals that are more than the author talking into a camera.

I make a little money from Patreon already, and want to enhance my content there to keep growing that platform. I can share a story and then share a video of myself reading it, editing it, and/or writing it. Interviews and clips can go on the site as well.

Being able to share videos adds a new level to the engagement on Twitter, Facebook, and elsewhere. You can also cut short clips from videos to advertise your content. I can draw more people to the podcast by having something quick to show them. Potential advertisers see they can get video and audio ads by the supporting the podcast. The possibilities go on.

What Other People Are Doing

There are authors using Twitch as a platform and a source of income. There is room for far more and I firmly believe there is more untapped potential than there are current examples for me to show you. Here are a few folks you can check out.

What Should You Do?

I don’t know what you should do. Definitely visit Twitch.tv/JayWilburn. Beyond that, I don’t know.

It’s wide open potential at this point. If you decided to try Twitch as an author platform, you wouldn’t be the first, but I think it is fair to say we are still in the pioneering and early settlement days of Twitch for writers.

Some of the magic in succeeding as an author is in finding that avenue not every author has tried yet. We could list off countless areas where early adopters did well and the rest of the industry chased the trend. Twitch may not be the right path or it may be that thing not every author has figured out yet. I would love to see what some of you creative wordsmiths could do with the platform.