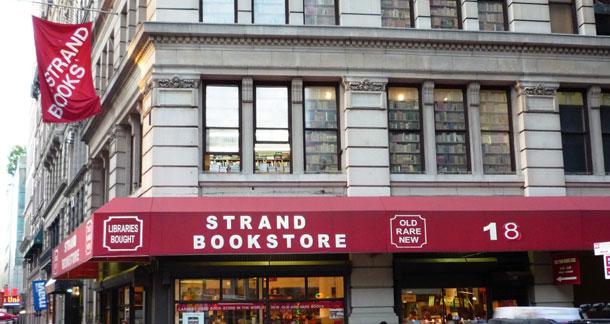 FOOD/DRINKS:  Not in the main part of the store, but you can rent the Rare Book Room for parties

HISTORY: The Strand opened in 1927; its founder, Ben Bass, named it after the storied publishing boulevard in London. It was originally on 4th Avenue, which was known as Book Row because of the 47 other independent bookstores that lined the street from Union Square to Astor Place. The Strand is the only one left (though it moved from 4th Avenue to Broadway in the mid-‘50s). It has 55,000 square feet of space, or as George Will snottily noted, “the eight miles worth saving in this city are at the corner of Broadway and 12th Street. They are the crammed shelves of the Strand Book Store.” It’s still owned by the Bass family, which now includes a member of Congress: Nancy Bass Wyden’s husband is Senator Ron Wyden (D-OR).

THE NEIGHBORHOOD: If you like hanging out with college guys and gals, or just ogling them (as I do – I’ve lived in the nabe longer than they’ve been alive), this is your Mecca; New York University, the New School, and Parsons School of Design are all here, as is Union Square, home to a fantastic farmers’ market four days a week. So go buy some books at the Strand, then stock up on the best locally grown and raised vegetables, fruits, meats, and fish in the city. As far as the college kids are concerned, keep your hands off the merchandise.

WHY IT’S AWESOME: To paraphrase the ingeniously named Lt. Col. Kilgore in Apocalypse Now, “I love the smell of book mold in the morning.” The Strand smells of old paper, dust, and the collective intelligence of the nation. (What does intelligence smell like? Well, as they say of the price of a room at Claridge’s, if you have to ask….)

The novelist Christopher Bram, whose history of postwar gay writers comes out this month (Eminent Outlaws; see christopherbram.com for his many works), has been mining the Strand for over thirty years. “It’s like wandering inside a book-lined brain,” he says. “For years I stuck to the literary criticism and fiction sections, which were both on the main floor. Ten or twelve years ago, I discovered American history and began to spend time there, when it was down in the basement. Later still, I discovered the science section, hidden behind history.”

Some of the legendary funk is gone now, sad to say. As Bram describes it, “The old metal shelves buckling under an overload of books have been replaced by solid ones. They moved history upstairs and literary criticism downstairs. And the art books are all on the second floor; it has to be the best selection of art books in the country.”

One of the highlights of a trip to the Strand is the seemingly unsellable stuff they’ve moved onto the sidewalk: obscure, out-of-print books that nobody seems to want go for two bucks a piece. Bram cites the treasures he’s found out there in the cold: “Froude's life of Carlyle, A. O. J. Cockshut's study of Anglican attitudes, and the memoirs of Moritz Thomsen. Such obscurities might sound like jokes but they're all quite wonderful.” Sure thing, Chris, but I defy anyone to read the phrase “Cockshut’s study of Anglican attitudes” without laughing.

“The Strand’s rare book room is where I would like to go when I die,” the screenwriter-director and Tony-nominated playwright Craig Lucas (The Dying Gaul, The Light in the Piazza) told me. It’s on the third floor and is everything the other levels aren’t: clean, scrubbed, and lined with shiny glass-doored wooden bookcases. At the moment it houses a gorgeously preserved first edition of Alan Ginsburg’s Howl for the low, low price of $2250. (Readers who would like to show their appreciation for this fine column may order the book for me online; I can pick it up any time.)

The novelist Alexander Chee (Edinburgh and the forthcoming The Queen of the Night; koreanish.com) sees it as a vast, crowded mural: “It’s like the book version of a Hieronymus Bosch painting.” (He’s right, though if the staff had pigs’ snouts it would be even more fun.) “I get an adrenaline rush when I go in. I'm always overwhelmed, but that’s what I like about it – the crush of the old and the new, the desired and abandoned, the piles of photo books I never buy, the treasures of the two-dollar shelves outside. It's more like a magical cave than a bookstore, providing a test of virtue, and in that, also, a reward.”

It’s one of the prolific novelist and biographer Edmund White’s favorite bookstores as well, though the rooms are neither beautiful nor empty. “The legend is that reviewers sell there the books they've received from publishers,”  the author of A Boy’s Own Story, Genet: A Biography, and many other books told me (edmundwhite.com):  “I've always prided myself that certain of my titles were never to be seen at the Strand – did that mean the reviewers actually wanted to keep those titles?” (I always get wildly depressed when I see my books in the stacks, especially when they’re next to the work of someone I detest.) “Whenever I've had a big assignment from the New York Review of Books, say, to write about Henry James,” White continues, “I've gone to the Strand to buy up dozens of James' books as background.” I’ve done the same. It’s much easier to charge up $50 worth of used books than to navigate the great New York Public Library. And since it costs me $5 to get to the library and back by subway, there’s no economic reason not to stock up at the Strand first. Alas, I’m not a member of the American Academy of Arts and Letters and an Officier de l'Ordre des Arts et des Lettres, as is Edmund White.

Chris Bram took his young friend Philip Clark (co-editor, Persistent Voices: Poetry by Writers Lost to AIDS ) on his first trip to the Strand. Clark was, of course, overwhelmed. “I felt as though I was being offered the literary equivalent of crack,” he declares. After several years, some warts appeared: “They're pretty horrible for gay nonfiction that doesn't fit into another category. It’s buried in the basement, and gets both smaller and shoved even further from where anyone might see it every year. Maybe the books just don't sell, but it still sends a lousy message.” Still, Clark maintains his allegiance: “There are homier stores, stores I find more charming, stores I feel better about supporting, but I never come to New York City without visiting the Strand.” Amen, brother.

The Lambda Literary Award-winning short story and novel writer Vestal McIntyre (You Are Not the One: Stories, Lake Overturn: A Novel) has a unique perspective among the authors I spoke to about the Strand: he used to work there. “Whenever someone was caught shoplifting, the first thing Security would do was take a Polaroid of them," McIntyre says. "Once, one of the managers let me look through the long metal boxes where they kept these Polaroids. It would make a great book, if it weren't for the legal issues – gaunt little old ladies with their eyebrows raised; kids pulling their caps over their faces; and my favorite – a punk rock girl flipping off the camera with both hands, giving it the old Double F-U.  Underneath was written, "Caught stealing Egon Schiele art book." I say they should've given it to her and used the Polaroid as advertising.

Class Director
Rob from New York City is reading at a fast enough pace it would be cumbersome to update this February 2, 2012 - 11:59am

Bravo. Great piece. I love this store. Sometimes when I'm bored but feel like walking around, I'll go here, and to Forbidden Planet on the other end of the block. I can make most of a day out of it.

This is hands down, my favorite place to go in New York City.

Joshua Chaplinsky from New York is reading a lot more during the quarantine February 2, 2012 - 12:39pm

Great job, Ed. I love the personal touches and the fact that you asked other writers what they love about The Strand.