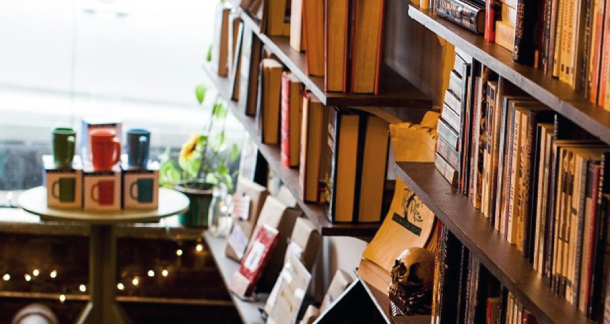 Indie Bookstore Day took place virtually on Aug. 29th this year, a day to celebrate all the good that independents do for their communities and the larger state of publishing — and a day for readers to give back to these small businesses.

While I missed celebrating the day itself, I wanted to take some time to honor independent bookstores, and I was lucky enough to chat with a few booksellers about all the ways these stores, more colloquially known as “indies,” support authors, publishing, and their communities.

Melinda Beatty is the author of the Heartseeker series, as well as a bookseller at the Curious Iguana in Frederick, MD. In addition to selling books, she puts her creative talents to use working on the store’s signage.

“Independent bookstores are often more than just retail spaces—we’re community hubs,” said Beatty. “Through events, we serve as a gathering place for people eager for discussion and fellowship.”

Personally, I’ve found this true — in the pre-COVID days, I frequently showed up to Books of Wonder, a children’s book indie in New York City, to meet authors, hang out with friends, and learn about books. I have countless signed copies of books, precious possessions, and though the store’s location in Manhattan (and me living in Queens or Brooklyn) meant that I was never in the habit of just popping by and making myself a fixture there, it just had this...quality to it. Like I knew I could show up and hang out and stare at all the pretty books and no one would judge me for wanting them so badly.

According to Nicole Brinkley, general manager of the Rhinebeck, NY, location of Oblong Books, there are three major book sellers: Amazon, Barnes & Noble, and independent bookstores. Of those three, she said, only the third invests in smaller-name and midlist authors that Amazon might ignore or devalue as they “rig the system in favor of their own books and their preferred publishers,” she said.

Beatty also indicated that Amazon values books less for their intrinsic value and more for what the titles can do for the corporation. “I think the main difference is how books are viewed,” she said. “In the case of Amazon, they are most definitely ‘product.’ Because of Amazon’s size, they can afford to sell books at a loss.”

Danny Caine is the owner of Raven Bookstore in Lawrence, KS, as well as the author of How to Resist Amazon and Why, and he said in Amazon’s eyes, books are a commodity.

“They're easily cataloged, there's a limited number of them in print, and they ship easily,” he said. “[Jeff Bezos] didn't care about what was inside the pages.”

Contrast that with how independent bookstores view books: as valuable objects which may help better the world. Books have “power and importance,” according to Caine, something indies are aware of and love, and big corporations like Amazon don’t care about.

Caine also spoke about the impact that independent bookstores can have on books and communities. 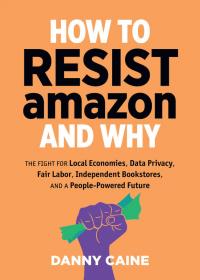 “One thing indies can certainly do is make hits out of books that bigger retailers wouldn't touch,” Caine added. “[Elena] Ferrante is the biggest example of this, I think. Indie bookstores can also champion small presses and marginalized authors in ways that larger retailers might not. They can also practice activism in a way that larger retailers can't; we answer to nobody but our communities and our booksellers, which I think allows indies to take a stronger stance.”

All three booksellers I spoke with offered insight into how the book-loving public can support independent bookstores: top of the list, of course, was shopping at indies vs Amazon.

“Buy from independent bookstores!” Brinkley said. “If you don't have an indie in your area, find one on social media you love and adopt them or use a resource like Bookshop. If you prefer audiobooks, Libro.fm supports indies (and lets you transfer your Audible credits!). You can even get e-books through Indies, through programs like Kobo.”

In addition to putting monetary support behind indies, Caine suggested “You can also follow and interact on social media, or wear our merch, or just support small businesses in general.”

And Brinkley followed up her suggestion to buy at indies by saying, “If you're on a budget but want to support indies, continue to boost their work. Continue to advocate for things like supporting the USPS, which allows independent bookstores to afford to ship across the country, and against large mega-corporations like Amazon.”

Ultimately, the book-loving world needs independent bookstores as much as they need us. We’re in this together. Of late, I’ve taken to shopping through Bookshop.org, since I recently moved and don’t have a local indie to adopt yet. It’s a great site that also raises money for independent bookstores generally when you shop there.

But if you can’t buy a book or a gift card or merch, why not swing by an independent bookstore (virtually) to attend an author’s launch event, or a panel? Tell your friends about your favorite books (and where to buy them). And tweet like the future of books depends on it.

I am very happy to revisit your blog. Thanks to your posting, I am getting useful information today. Thank you for writing a good article.  메이저놀이터