In Defense Of Indie (It's Not What You Think)

I’m going to use one of those sly literary tricks that I always find just a tad bit annoying in stories and novels: I’m going to start this column at the end and then go back to the beginning. Because, hey, why not.

So here we go:

The question I think we need to ask ourselves as writers is this: Does indie publishing really need to be defended?

Short answer: No, not really.

Now for the long answer:

Seriously, small and micro-presses have been around for years, and the bulk of them put out quality writing that easily rivals anything the big 6 have put into the world. (This is particularly true of publishers such as Lazy Fascist, Polis Books, Broken River Books, and Beat to a Pulp, just to name a few.) As for author published works (Matt Wallace coined that one, as opposed to calling it “self-published”, and I kind of like it and have decided to adopt it), I look at the books being put out by guys like Robert Gregory Browne and Brett Battles, compare the quality of both the covers and the writing, and they easily compete with the books they published through the big 6. In fact, the material they’re both writing now is, in my opinion, of a much higher quality.

The other thing is, there are dozens-upon-dozens of author-published writers such as Hugh Howley and J.A. Konrath (yes, I’ve evoked the beast’s name. By the way, it is a fact that if you say Konrath’s name three times in a bathroom mirror, he will appear in a bathrobe and proceed to lecture you on the evils of the “gate-keepers” and clean out your fridge), who’ve created something of a cult when it comes to author publishing, and in turn have created something of a standard when it comes to editorial and graphics quality.

The next question is, do we really need another voice defending indie and author publishing?

You wouldn’t think so, but …

Yeah, I’m going to add my voice to the crowd, but I’m going to come at indie publishing from a slightly different angle. I’m going to defend people’s right to publish absolute garbage.

I Can’t Believe I’m Defending This Shit, But …

A few weeks back I reviewed an indie release that I wasn’t exactly a fan of. The writing wasn’t bad—the author actually showed a lot of potential—it’s just that the execution lacked a clearly defined voice, which in turn distracted from the overall story. What I did like about it was you could tell there was some real passion in the writing, and the author wanted to share that passion whether it was ready to share or not. I respect the attitude and encourage authors to keep pushing forward.

Yet for every passionate but immature book you run across, you also discover unadulterated crap, such as this little gem called Hacked that I ran across on Nick Mamatas' Facebook page.

Rodney thinks he is a true ladies man on the internet. He is also a sociopath. He spends his days talking to women on social media and wooing them with his internet prowess. Except most women are not impressed.

When he meets Abby on a site he decides immediately that she is the one for him. Abby however, doesn’t see it that way. When she kindly turns him down, Rodney takes matters into his own hands. He kidnaps Abby to teach her the consequences of refusing his advances.

Over the next twenty-four hours, Abby learns a new definition of pain and suffering. Using conventional tools as well as some homemade devices, Rodney will stop at nothing to get his point across,

What will Abby do to keep from being Hacked?

Okay, so if you threw up in your mouth a little bit, that’s okay. It’s a perfectly normal reaction, and one I shared with you for two reasons:

1) This is rape fantasy fiction, and it’s sickening. And if it’s not, if Hacked is instead your standard woman-in-peril style thriller, the back cover copy and the cover photo are not conveying that message. What it’s conveying is that some woman hating shitheel wrote an awful book for other awful woman hating shitheels.

2) The layout and copy of this “book” is just fucking shitty.

So the major issue is, when you see “books” like this being published, it’s kind of hard to defend indie publishing, because you realize that anyone from the most idealistic artist to a serial-killer-in-waiting can put a book out, and quality be damned. When you see Hacked and others of its ilk, you start to kind of think that legacy publishing and the “gate-keepers” are actually a good thing (and they are, folks, but that’s for another discussion), and that maybe letting people publish whatever the fuck they want isn’t such a hot idea. 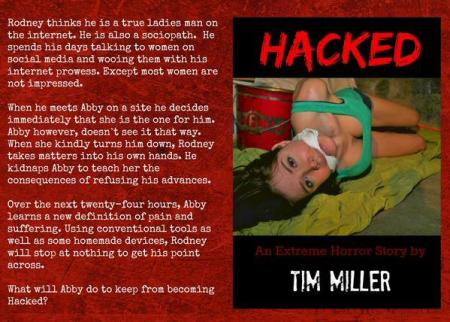 We now come to the big BUT of the indie argument. If it’s okay for individuals who have quality stories to tell and they author-publish, doesn’t that mean it should be okay if not so talented people who have shitty stories to tell should have the same freedoms?

And now for the inevitable long answer:

That’s the bitch of a free society, ain’t it? We may not like certain stories, we may find them disturbing, downright disgusting, and fit to be burned, but folks have the right to put it out in the world for people to consume, and they can do so with bad book design, shitty editing, and even crappier content.

The next question is, am I defending the crap makers? Am I defending guys and gals who write dino-porn and rape fantasies?

Now I’m not saying I would die for garbage like Hacked to be published. If someone was holding a gun to my head and it was my life or the existence of Hacked, that gross piece of prose would be hitting the digital bonfire. But as far as the principle of a book like Hacked and its right to exist, I would defend that.

The one thing we as readers and writers can do is if we recognize shit, if we recognize that something is offensive we can one-star the hell out of it. We can make sure that people know that what they’re looking at isn’t worth their time, just like when we give five-star ratings to work we find exceptional. We ultimately have control, because we are the gate keepers.

Back To The Beginning (AKA Boy, That Sure Went Off The Rails)

Trust me, I didn’t think I would be writing about freedom of expression when I first pitched this column. What I originally wanted to write was about the freedoms and diversity that indie publishing provides. I wanted to share my thoughts on all of the cool micro-publishers currently operating, and all of the cool authors who are doing it on their own. I also wanted to encourage all of you to support these presses and authors. I still want all of that. Support your favorite indie writer. Hell, support your favorite big 6 writer, too, because chances are they’re earning just as much as your favorite indie author.

Now as far as the garbage that floods Amazon and iBooks and the Nook store—don’t read it, don’t buy it, don’t support it. Or do support it if it’s something you like. Because let’s face it, at one time novels such as Lolita and Lady Chatterly’s Lover were considered obscene. And, yes, I know, Hacked is not even remotely close to the same level of quality or artistry, but whether we want to admit it or not, the three books do occupy the same wheelhouse.

So we come back to the original question: Does indie publishing really need to be defended?

And the only answer is yes, it does.

Good column, and as an indie author I agree: we have to put up with all the stuff we consider dreck or worse because with our right to publish comes everyone else's.