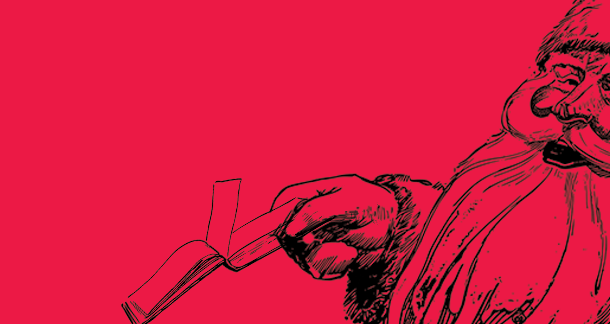 And, my fellow book lovers, I’m here to tell you that we, as a whole, have fucked up the holidays in the past.

Because we love books so much and love certain books so deeply, we’ve let ourselves fall into some book-gifting traps that might be making the world of books…a little less appealing, overall.

Let me flag the minefield of giving books as gifts.

Blasting someone with your personal taste isn't a good way to give a gift.

I get it, you’re a book pusher, and you love the idea of giving a book to someone who doesn’t read. The movie in your mind has you handing off a book, maybe wrapped in a tasteful ribbon, the recipient taking it, and then returning to you days later, swooning over your book selection.

That’s not what’s going to happen. Unless the gifted book happens to be a very complimentary biography written about the recipient, and that recipient somehow did not know this biography existed. Outside of this very narrow possibility, don’t give a book to a non-reader.

Giving a non-reader a book comes off more as a lifestyle suggestion than a gift: "You should read." This is ESPECIALLY true if it’s a book you’ve read, which piles on the implication, “I read, am therefore slightly better than you, and here’s concrete proof.”

A lifestyle suggestion with a one-up is not a gift.

Nevertheless, unsolicited constructive criticism isn't a gift, even if it's in the form of The Orgasmic Ecstasy of Cleaning Up Once In A While or whatever that shit is called.

Before you give someone a book because it’s “very well-written,” do me a favor and give an imaginary book report on it. And the crux of the book report is that you have to unpack what “well-written” means.

Here, I'll save you the effort: "Well-written" is a way of saying “I liked it” that sounds more thoughtful, makes it seem that your enjoyment is more about an objective quality than a vibe, but all it really means is that you liked the book.

Which is great. I'm happy you found a book that you like.

And that's the worst way to gift a book: make it about what YOU like instead of considering what the recipient likes.

Blasting someone with your personal taste isn't a good way to give a gift.

Bookstore gift cards are great. You can support a bookstore of your choice, and you give someone the chance to spend money on something fun.

If someone specifies they want an ebook, get the fucking ebook.

Like most people around my age, I rent, and the housing market fills me with far more despair than anything Cormac McCarthy could nightmare out onto the page. When I eventually have to move, which is never too far from the mind for a renter, I'd rather not carry more books with me.

A dense block of reconstituted wood is not a gift when you'll have to haul it around.

Likewise, and this comes from years of experience helping people with eReaders in a library setting, when you give someone who is not tech savvy a Kindle, it doesn't make them happy. They read to enjoy books, and messing with technology is not reading books. It's not relaxing to them. They feel like, at any moment, they're going to touch something that messes up the whole system. Then they leave the Kindle in a drawer and feel guilty because they know you spent some money on it.

A piece of technology is not a book gift.

The gift card’s gotten a bad rap over the years. It’s kind of like giving cash, it's kind of impersonal.

Fuck all that shit.

Bookstore gift cards are great. You can support a bookstore of your choice, and you give someone the chance to spend money on something fun. For the kind of person who doesn't spend on themselves much, that can be a wonderful thing.

Not Making It An Event

You could hand over a book

“We’re going out. I’ll get dressed up. We’ll eat some dinner, and then we’ll wander the bookstore, and I’ll get you whatever book you want. Take your time, pick something out. Forget your lists and your to-read stuff, just pick something that calls out to you."

That lets you give a book AND an experience. It makes the book a better gift because the object itself is a souvenir of the time you spent together.

Get In God We Trust: All Others Pay Cash by Jean Shepherd at Bookshop and Amazon

Get Sausagey Santa by Carlton Mellick III at Bookshop and Amazon