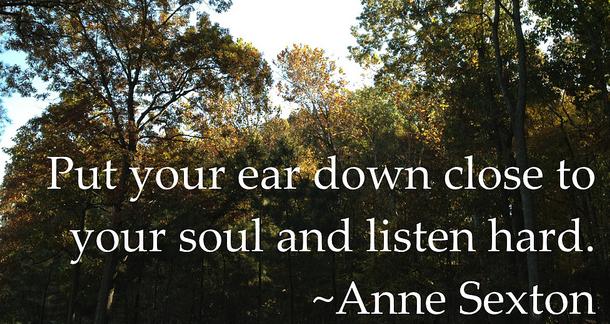 Anne Gray Harvey Sexton was born Nov. 9, 1928 in Newton, Massachusetts to a woolen manufacturer. Her life was fraught with unhappy relationships and a downhill battle with depression, but to read her writing is to glimpse the mind of a remarkable woman whose work demonstrated the convalescent powers of the written word. Her writing began as a form of therapy and it has endured long past her suicide at the age of 46.

Sexton first began to write poetry when she was sent by her parents to a boarding school in Lowell. She married Alfred "Kayo" Sexton II at the age of 19, and it was her infidelities to him while he was serving in Korea that first led her to seek therapy. Her depression deepened over the years following the birth of her second child, and Sexton was institutionalized for a time.

In 1955 she met Dr. Martin Orne, who encouraged Sexton to pursue poetry. It was during this period of her life that she wrote the poetry collection To Bedlam and Part Way Back, which was released in 1960 to critical acclaim. It was followed by All My Pretty Ones, Live Or Die, Love Poems, and her most feminist work, Transformations, among others. She also formed a jazz group called Her Kind that set music to her poems as a way of making readings more bearable.

The themes in Sexton's work confront isolation, sadness and death as well as imagery specific to women's lives. She is called a confessional poet, being one of a number of artists in the 1950s and 60s to write in a personal manner in the form of “I.” Sylvia Plath and W. D. Snodgrass, both of whom were acquainted with Sexton, are two other examples of this form of poetry. Like many of the confessional poets, Sexton paid close detail to technical quality and prosody of her work. In her words, poetry should “almost hurt.”

Sexton's life ended in October of 1974. After having lunched with Maxine Kumin, Sexton is said to have put on her mother's coat, removed all of her rings and asphyxiated herself with carbon monoxide in her garage in Boston.

The story of Anne Sexton is important not just for the work she created as an individual, but for its plunge into the darkest side of mental illness. Sexton created despite and because of her depression, but her poetry never glamorizes its effect on her writing process.

Thanks for the column. Happy Birthday, Anne Sexton. I don't know her work well, but the titles are familiar, and I know I have read if not studied her work.

She formed a jazz band called "Her Time" to make her readings more bearable. This is funny and brilliant. I love knowing this. I thought readings were pretty much a dead horse of the past until I joined LR and came to realize how many writers are on the road doing readings, which I loved finding out, and that the discussion of a reading being a performance, as opposed to a reason to take a little nap in public, has a great resonance for me, as an actor. Why would you coax an audience to come and be bored with you, how embarrassing. I would have liked to hear the jazz group she formed. Maybe I will research that. Any other readers know anything about her band?

Smithreynolds, I'm glad you enjoyed the column. I did a quick check and found a recording of her reading with the band.

Damn." Nipples like warm stars"   "Into your redeeming skin"  That was great. Thanks for posting. I remember her voice. I have more knolwge o her than I thought. Thank you so much.

Sexton belated many many happy returns of the day.I could not be on time as I was busy in writing https://luckynj.com/reviews/bet365-casino blogs.I am just apologetic but I am just back now.

First time i am not sure how to open file explorer in window file explorer windows so,now get the one of the best way and easy to find solve this issue.