Guess The Plot: A Reawakening and a Reboot 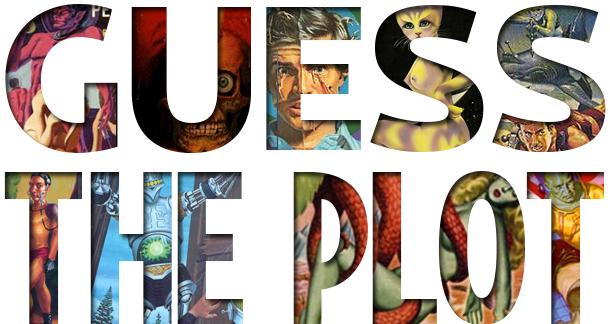 Guess The Plot is an original feature first conceived and run by Jon Korn. Go here for previous installments.

It’s the triumphant return of Guess the Plot! Prepare for unspeakably strange, inscrutable, and inappropriate book covers combined with wild speculation about the words hidden behind them. You’ll like it whether you … like it or not. Maybe that tagline needs work.

How it works: The binary gods Wun and Zeirrao, those ineffable digital deities, give us a book cover. Based only on the information visible on the cover, I infer the plot of the story using my years of experience as a literary detective (no references available). Then, through the power of the internet, Wun and Zeirrao lead us ever so benevolently to an actual summary of the book’s plot. Finally, we compare the two and see what I got right and (rarely) wrong.

The Last Starship from Earth by John Boyd 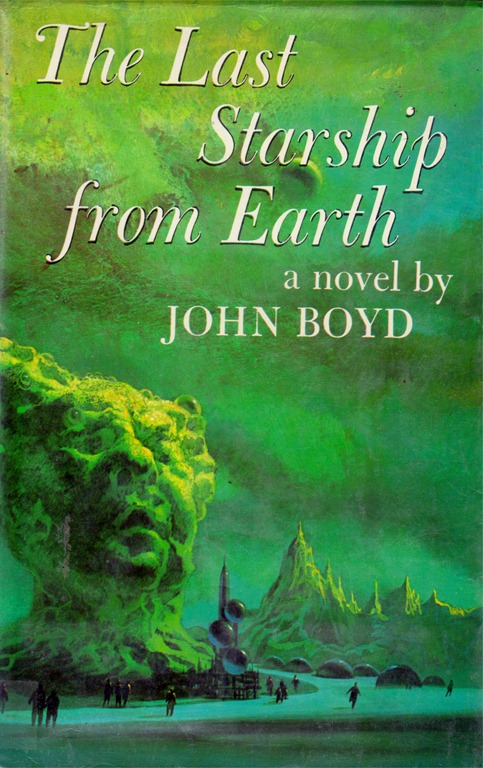 This is surprisingly low-key for the big rebirth of GtP. I was expecting … I don’t know, something weirder. Wait, is it just me, or is there a giant face in that green rock/fungus? I can’t tell if it’s sneezing or sneering. The art style looks like it’s from the 50s or 60s. I need to know which because 50s book covers could be pretty literal, whereas 60s book covers were only literal in direct proportion to the amount of time since the artist’s last dose of LSD.

Judging from the title, we’re on an alien world. It’s really … green. Wait, this is about the last starship from Earth, so maybe this is all that’s left of humans after a cataclysmic event. That’s it. These are refugees. Now, is the face in the rock a metaphor? Like the protagonist feels frozen? … confined? … restricted! Restricted by everyone’s fear that they will all die on the interstellar frontier.

I like where this is going. Okay, the Earth dies of [disaster caused by man’s hubris]. Evacuation to space has been going on for years, but people are dying on the colonies, too. [Protagonist] is a plucky but unruly antihero who wins a lottery to board the last starship from Earth. He is special in some way, so he finds the colony to be restricting, and nobody wants to talk about the weird carvings that are showing up everywhere. After some investigation with his [sidekick/girlfriend], they discover that mankind came here hundreds of years ago, but were wiped out by a malevolent alien race. And the aliens are returning.

(Spoiler Alert!) In a dystopic, alternate history of Earth, Jesus Christ was never crucified and led a successful rebellion, overthrowing the Roman Empire. He established a caste-based society where different sciences and arts are segmented from each other. In “modern” times, sociologists and psychologists consult with the robot pope to rule the world and arrange marriages that are likely to produce exceptional offspring.

The main character, Haldane IV, a promising mathematician, simultaneously becomes interested in the work of a famous dead mathematician named Fairweather I and a beautiful and seductive poet named Helix. She and Haldane discover that Fairweather’s son, Fairweather II, led a rebellion against the government. They become involved in a new rebellion and are captured, eventually being exiled to a penal colony on Pluto, which is also known as Hell.

On Hell, Haldane meets Fairweather I, discovers that Helix is Fairweather’s granddaughter, and learns that she was sent to get Haldane exiled because Fairweather I needed a mathematician to pilot his time machine. Fairweather makes Haldane immortal, renames him Judas Iscariot, and instructs him to go back in time to assassinate Jesus. Haldane IV sends Jesus back in the time machine, and then waits for two thousand years, watching a new history unfold until he meets a girl that closely resembles Helix.

I have no idea what just happened. Wun and Zeirrao were really messing with us here. I mean, this felt like a trick, so I deliberately didn’t go wild with predictions. I thought guessing about aliens was a stretch, but clearly I never should have taken “assassinating Jesus Christ” off the table. Judas Iscariot was actually an immortal mathematician from Pluto, or rather, Hell?! This must have been the result of a fever dream or an exceptionally rough upbringing in an evangelical household.

Okay, let’s focus on the positives here. I predicted that the protagonist had a girlfriend and was special in some way. I know this is stretching it, but holy Roman robots, Batman, I’m going to claim as much victory as I can in the face of this mountain of absurdity. I didn’t say anything about a caste system, but I got the bit right about feeling restricted. Clearly, Haldane IV was chafing under the strict rule of the robot pope.

I can’t believe I just typed that sentence.

This John Boyd guy was definitely on something. Not only is the plot cuckoo, but the characters are too. Haldane IV is apparently quite vocal about a special sex move he perfected that is guaranteed to drive the ladies wild. He calls the move the “Haldane Swizzlestick.” I’m not a woman, but that sounds incredibly unappealing. And Helix is strange, too. When Haldane is grieving after his father’s funeral, Helix comforts him by breastfeeding him. I’m not making that up. As if that wasn’t gonzo enough, she exclaims, “Feast upon life!” while her boyfriend is nursing.

Would you have interpreted that cover differently? Did the real book synopsis make your mind bleed? Got a cover that will appease the fickle tastes of Wun and Zeirrao? Tell us in the comments.

The protagonist's name, Haldane, is almost surely a reference to J. B. S. Haldane, who in his book/lecture "Daedalus or Science and the Future", wrote in a positive way about eugenics, which seems to be a central part of the plot of the novel.

The link above has the full text and it's an amazing read.

Thanks for the additional info, hipokrit. This book is one rabbit hole after another if you start looking into the author and influences behind it. The realities are just as astonishing as the fiction, although I think there's less breastfeeding involved.