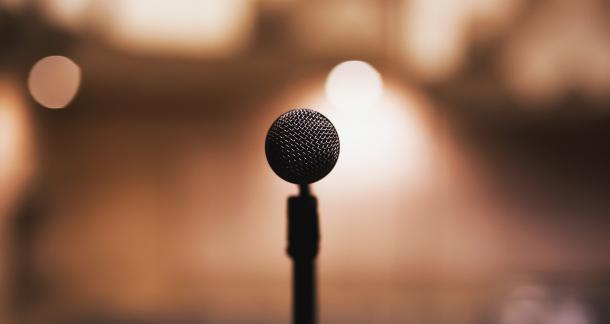 Early this fall I did one of those live storytelling things. You know the type. You get up on a stage, you get ten minutes or so, you tell a story from memory, and if you’re lucky, people clap at the end. In my case, you tell a story about your cat, mostly avoid crying, and wind up feeling pretty good about the whole endeavor.

I’d encourage you to try it. It’s a great writing exercise, and it’s good to try out some material in front of a live, attentive audience.

It’s nerve-wracking, it’s harder than it looks, but don’t worry. We’ll get through this thing together.

The beginning of your story needs to grab the listener’s attention. I know writers say that ALL THE TIME, but seriously, you’ve got a couple minutes to capture your audience or lose them. And keep in mind, these events often take place where alcohol is served.

Don’t go for pure shock value, don’t worry about starting with a death or an orgasm or something. Just use your first couple of lines to answer the question, “Why should I sit here and listen to this asshole?”

Most of these things have a time limit, maybe 10 minutes. Believe me, 10 minutes of storytelling is not like 10 minutes in a work meeting. Time goes fast when you’re up there. Nobody will give you a hard time for telling an 8-minute story, but some of these events are pretty harsh about the cutoff.

Less is more also means telling a simple story with one or two themes. Long, complex stories are great and fun and useful, but these events aren’t the right venue for them.

If you can divide your story into chunks, almost like chapters that can exist on their own, this will help in the event of a catastrophe of forgetting. If you’re totally lost, you’ll have these touchstones to get you back on track.

You shouldn’t have a forgetfulness problem. You’ll practice more than you’ve ever practiced before (see below). But chunking will help with the nerves.

It’s impossible to over-practice. Some people worry about losing spontaneity or about sounding wooden if they practice too much, but I think that’s like sitting down to the first blank page of your novel and wondering whether the prose will work for the European market. You’re not there yet. Cross that bridge when you get to it, IF you get to it. In the meantime, practice, and trust that the shock of being in front of a crowd will add a charge to your story, even if you’ve practiced it to death.

You’ll hear and see tons of people who didn’t practice enough. Chances are you won’t see a single person who overdid it on the training.

Good practice is running through your entire story, out loud, from beginning to end.

Good practice is speaking aloud in the tone and at the volume you plan to use on stage.

Good practice is telling your story out loud in different situations. While you’re driving, in the shower, while you take a walk. Get your story so nailed down you could tell it drunk, stoned, and hanging upside-down in a hot dog costume.

Good practice is not running through the beginning a hundred times, the middle 50 times, and the ending twice.

Good practice is not whispering it to yourself under your breath.

Good practice is not comfortable.

If you do it right, people will laugh. Let them. If you plow through the laughs and keep telling the story, and if your audience misses important information because they’re laughing, they won’t want to laugh anymore for fear of missing something important.

It’s the most uncomfortable feeling in the world. The clock is ticking, you’re on a roll. But remember, people are there to enjoy your story. Let them.

Do Not End With A Moral Of The Story

There’s a strong temptation to end most oral stories with some version of “And the lesson I learned is…” or “The moral of the story is…”. Don’t.

In making the lesson overly clear, you kill the story in two ways:

One, when you move outside the story to tell everyone the moral, you axe any momentum you've built. Don’t leave the story when things are good or intense or emotional or physical, which is what your story should be by the end. Stay inside. Stay close to the feelings and the intensity.

Two, a "lesson learned" tells the audience how to feel about your story. That’s not your job. It’s their job to figure out how they feel, and an audience won’t necessarily reward you for doing their job for them.

End on a gesture, end on a physical action, end with a joke, end with a sense (smell, taste, etc.), end with something you used near the beginning of the story—end with anything but that tidy, forgettable ribbon that says, “And here’s what I learned.”

There are a lot of ways people can spend an evening out, and the people in your audience have chosen to take a risk and spend the evening listening to you, an unknown storyteller. Practicing, crafting, all these things are about paying respect to the audience that has put aside any number of things to come out and hear you tell a story.

When you’re on your 15th run-through of a story, and when you start to think maybe it’s good enough, remember that every person in the room, every person who listens to you, will have something better they could be doing.

Show up on time. Stay sober. Follow directions. When the show is over, help the organizers pack stuff out to their cars.

A roomful of people listening to you is an honor. Earn it.

This is really an amazing article,thanks for sharing, Updated Oreo TV Apk