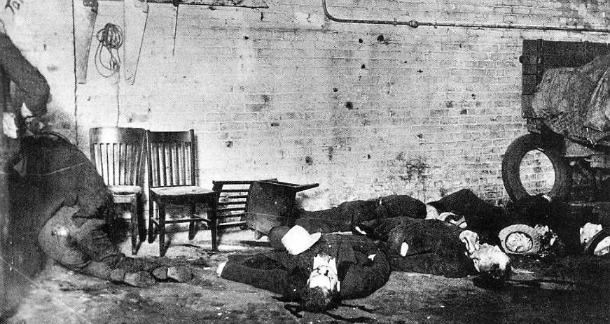 When seven mobsters were found dead in a Clark Street garage in the Lincoln Park area of Chicago eighty-five years ago today, the prevailing opinion, once news of the grisly murders spread throughout the country via telephone, telegraph and, the next day, the daily papers, was that Al Capone, the stocky, burly gangster of not-so-ill repute, was the mastermind behind what came to be known as the Saint Valentine's Day Massacre.

This was a hotly debated issue, Capone being responsible and all, one that raged across the U.S. in barbershops, grocery stores and churches, and in the dim lighting of speakeasies especially. Every police precinct from Boston to San Francisco was talking about it too. And every citizen in every town with even a drop of alcohol in one of its establishments, no matter how big the population or how small the drop, and even towns without a whiff of the stuff — they took notice too.

This event — this massacre, because that's exactly what it was — wasn't just another couple dead gangsters, though. This is America we're talking about here. Dead gangsters grew on trees in the Roaring Twenties. No, it wasn't that. But it was something. It was the sheer brutality of seeing seven men riddled with bullet holes by who-the-hell-knows for reasons unknown. It was the images of those men that circulated in those daily papers, images like the one above, images that gave grown men weak stomachs.

Much like the gangster figure, a figure of antiheroic lore and one just as famous then as movie stars are now, this event was a fascination in the weeks, months and years following February 14, 1929. It was also a societal and cultural awakening. We learned that our admired Robin Hood-types weren't as glamorous as we thought they were, with their sparkling Duesenbergs and their fancy Chicago Typewriters and their whole being-a-rebel-before-being-a-rebel-was-cool shtick, and we learned that our fascination with them was actually just beginning.

The societal outlook on gangsters shifted from admired to reviled in the wake of the Saint Valentine's Day Massacre, but one thing remained constant: We still loved to read about them in the daily papers. And, not long after, we found out we loved to watch them too.

The societal outlook on gangsters shifted from admired to reviled in the wake of the Saint Valentine's Day Massacre, but one thing remained constant: We still loved to read about them in the daily papers.

When The Jazz Singer introduced America to feature-length talking pictures in 1927, it also introduced America to the resounding superpower that Hollywood would come to be. Little did we know that the talkies that came out of studios like MGM, Paramount and Warner Bros., all still in their infancy at this time, would revolutionize the way we consumed not only abstract ideas, but the way we viewed ourselves.

The Saint Valentine's Day Massacre aided and abetted those revolutions. It wasn't until those seven men were slain that we realized just how far we could go, how far we could follow our fears and inhibitions into dimly lit alleyways or downtown garages in the dead of day.

In 1931, the same year Al Capone was convicted of tax evasion, Warner Bros. released Little Caesar. The following year saw the release of The Public Enemy and Scarface. Together, these three films formed the original triad of classic gangster fiction, each of them exploring at least one of the three main themes of this new genre: the rigors of rising through the ranks of organized crime, the societal problems that Prohibition caused in the U.S., and the animalistic brutality in which conflicts were resolved.

Those films didn't create those themes — working your way to the top, scathing commentary on social issues and the consequences of bad decisions are all themes as old as inkwells — but they did put the archetypal antihero in place to represent them. Main characters were fatally flawed, revered by the audience one minute and despised the next, and some of them were dead when the final credits rolled.

Hollywood — America — hadn't yet fully embraced the antihero on film. Antiheroes roamed our streets. We saw their mugshots in the papers every day. We wanted to escape that when the house lights went down. We wanted Al Jolson to entertain us and put a smile on our faces. We wanted the silly shit you saw on Vaudeville. We didn't want fictionalized versions of Al Capone and his henchman wiping out rival gangs with Tommy guns.

But, you know, sometimes we don't know what we want until you give it to us.

Literature, of course, embraced antiheroes long before cinema was a word in Webster's. Milton wrote Lucifer as a main character in Paradise Lost in 1667. Dostoevsky did the same with Raskolnikov in Crime and Punishment in 1866. And Thackeray used antiheroes in two of his most famous works — Becky Sharp in Vanity Fair and Redmond Barry in The Memoirs of Barry Lyndon, Esq.

With the exception of Jay Gatsby, however, there was a lull in literary antiheroes after the turn of the century. Perhaps the wonder of the moving picture distracted authors from creating compelling protagonists worth a story all their own; perhaps not. Whatever the reason, the American Dream had been restored — in the minds of Americans, on the literary page and, then, on the silver screen. Hope reigned again. Funnymen were in vogue.

And America sorely needed some hope and fun. When the nationwide ban on alcohol went into effect in 1920, it quickly became burdensome on citizens. It was, as most laws seem to be, beneficial to those who enacted them and detrimental to everyone else. Americans were unhappy and they wanted their booze back. But they were powerless and without the means to do anything about it.

Re-enter the antihero into mainstream culture. Enter the gangster, the take-no-shit, balls-to-the-wall protagonist that we needed. Here was a group of tough guys who were going to give us our booze back and stick it to the asshole who took it away. And that's how we looked at things for a decade. We watched as people like Capone and Bugs Moran went from small time crooks to multimillionaires, and we applauded their every move, loved their antics, adored their everyman-type personalities, toasted them every night in our speakeasies and basements and on our back porches.

Then, the massacre happened, and our sentiments changed. Sure, we knew these guys were violent; we heard the rumors, read the headlines, skimmed the stories. But seven men dead in cold blood — the gruesomeness of it; these men felt innocent to us — seemed too much for us to handle. It was the last in a series of jokes delivered by a group of friends, the joke that took the initial premise too far and made everyone reconsider their friendship with the jokemaker.

Hollywood, however, sniffed blood in the water, and they pounced. Good art — effective art — corners us and digs at our most primal emotions, our fears and curiosities, and doesn't let us go without facing them. Little Caesar started to do that, and The Public Enemy took it to the next level. But it wasn't until Scarface that we realized we were still smitten, still in love with the lifestyle we said we loathed only three years prior.

Howard Hawks' Scarface was released at the height of the Great Depression, when guys like Capone were in jail and guys like Dillinger were just starting their wave of crime that, coupled with the economic collapse, would define the decade.

Scarface was as much psychological character study as it was violent gangster film. Many critics and moviegoers called it the most violent film of the 1930s, what with its re-enactment of the massacre, and it very well may be. But it was the film's fictional portrayal of Capone that reinvigorated our interest in him and people like him. Scarface showed us that working hard got you somewhere, even if you wound up in an early grave because of it.

Scarface didn't create the gangster genre in fiction or film — credit the 1906 film The Black Hand with that — but it kicked in the door and announced its arrival at gunpoint. It brought back with it the antihero that we never thought we needed. Without Hawks' film, Puzo probably never writes The Godfather; Pileggi probably never pens Wiseguy; Chandler and Hammett probably don't have careers; antiheroes like Meursault, Holden Caulfield, Alex and his droogs, Patrick Bateman and Tyler Durden probably don't exist; and Coppola and Scorsese probably aren't quite as revered.

But all that happened and is true and real and we're better off because of it. Those seven men, innocent or guilty, were martyrs, if we're honest about it. The Saint Valentine's Day Massacre cemented the legend of Capone, even if he doesn't look as responsible for it now as we once thought, and it introduced the world to a character, real and fictitious, that's lived on long after death, and to a genre that continues to capture our imagination — and dig at our fears and curiosities.

Our love affair with gangsters, and by extension the event that catapulted them into lore and legend, has spiked up and down since that snowy day in Chicago eighty-five years ago, but we'll always remember them fondly. And, honestly, if Peter and Frank Gusenberg, Albert Kachellek, Adam Heyer, Reinhardt Schwimmer, Albert Weinshank and John May aren't brutally murdered in a garage in Chicago on February 14, 1929, we don't have any reason to remember the day.

edsikov from New York by way of Natrona Hts PA is reading absolutely nothing February 14, 2014 - 12:07pm

Great and timely article! Nice work! I'm a big Scarface fan as well - the Hawks, not the grossly overblown and ridiculous DePalma. But as far as depictions of the St. Valentine's Day Massacre are concerned, don't forget Some Like It Hot, in which the two musicians (Lemmon and Curtis) happen to wander into the garage right before "Spats" Columbo arrives and guns everybody else down. It's the fact that they're witnesses to the infamous crime that forces them to use any means they can to get out of Chicago - which turns out to be donning drag and becoming (in Curtis's words) "a couple of girl musicians."

Huge fan of Some Like It Hot, Ed! Thanks for reading!