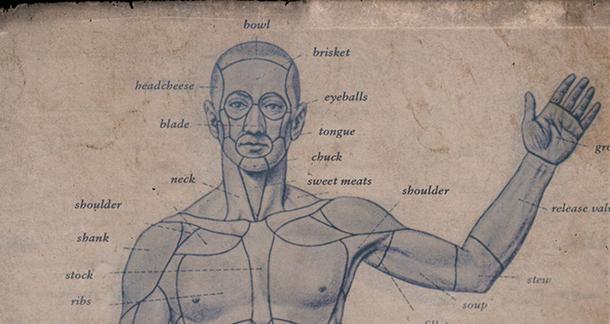 When I finished reading Dan Simmons’ The Terror, a fictionalized retelling of the disastrous Franklin Expedition of 1845 (and the inspiration for the very expensive-looking AMC series starring Jared Harris and a bunch of British actors with fantastic cheekbones), I thought two things:

First, whatever happened on that ill-fated journey through the Arctic wastes, most of the real-life crew wasn’t systematically torn apart by a Yeti-like creature impervious to bullets. Simmons definitely made that part up.

Second, if anyone among the crew had descendants who knew their lineage… did those descendants take issue with their forefathers’ fictional portrayal? I’m not just talking about the crew’s dissolution into madness, mutiny, and cannibalism—the book also features some seriously weird stuff involving shamans, Inuit Gods, severed tongues, and the aforementioned Beast from Hell. It’s not out of the question that an heir might end up feeling a bit, well, uncomfortable about a fictionalized version of their great-great-great-granddaddy chowing down on a colleague like a 12-piece meal from KFC.

I wouldn’t want to risk a surprise left hook to the jaw during the next family cookout.

That slim possibility aside, when you’re writing a novel about folks who died more than a hundred and fifty years ago, in a place relatively few people have ever lived or visited, you have an enormous degree of latitude to portray events as you see fit (provided you can sell the audience on the narrative). But when you’re tackling a more contemporary story, with locations and situations that your audience might be more familiar with, things get a little thornier. I learned this while working on my novel Boise Longpig Hunting Club, which is set in contemporary Idaho (and, like The Terror, involves a lot of chaos and doom in isolated places).

In order to achieve a certain degree of verisimilitude, I set scenes in places around Boise that I know well: restaurants, bars, my sister-in-law’s old street, my father-in-law’s cul-de-sac, and so on. Using real-world locations as “sets” for your characters is a standard tool in the writer’s box. I also built out my characters with some details from my friends’ and relatives’ lives—a tour in Iraq here, a dangerous night of bounty hunting there. Also pretty standard-issue; who hasn’t mined the lives of their nearest and dearest for material, especially when they have the specialized knowledge that your characters need?

Midway through her reading of the manuscript, my wife, who doubles as a key beta reader, began to make gentle sounds of consternation. She liked the book, but she was concerned that I had mixed my characters’ clay with a bit too much real-life detail. “I don’t want anyone to get offended,” she said.

(A quote from Czeslaw Milosz drifted to mind: “When a writer is born into a family, the family is finished.” You could probably extend that idea to friend groups, as well.)

Another beta reader brought up a similar issue. “You probably shouldn’t shoot up a real-life place,” they said. “I know it’s fiction, but that’s where real people live and work. You don’t want to give it a weird rep.”

If you’re writing a memoir, changing any detail is a controversial practice; while some memoirists will deem it necessary in order to give the narrative more literary “heft,” others view virtually any alteration as fabrication, and unconscionable. For an example of the potential consequences of such “adjustment,” look no further than James Frey, who was shredded by Oprah when it became clear that he had embellished (to put it mildly) A Million Little Pieces and My Friend Leonard, a pair of books originally marketed as memoirs. (The exception seems to be changing elements of characters’ lives in order to protect people who are hiding, or somehow in danger, or simply don’t want to be identified.)

Fortunately, fiction often gives you the leeway to change details derived from real life while keeping the overall thrust of the narrative (and character motive) intact. You can edit, add, and delete as necessary—so long as you keep your ultimate destination in mind. So I ended up tweaking some characters during my second round of editing, and “fictionalizing” a hotel (i.e., changing its name, street location, and some architectural details) where some spectacularly bad things happen. I was happy to do it; I wouldn’t want to risk a surprise left hook to the jaw during the next family cookout.

Nonetheless, the experience raises some interesting questions. Is there an ethical line when it comes to incorporating real-life details into fiction? And if so, where does that line exist?

Noir at the Bar: An Oral History

Taylor from Durango, Colorado but living in Portland, Oregon is reading The Paradox Hotel by Rob Hart August 13, 2018 - 10:18am

I wrote an article a few years back about using real life experiences to enrich fiction plotlines. I meant that writers use it lightly and disguise it enough to avoid offending people. It was meant to be a lighthearted article that encouraged people to find inspiriation in what they know, but TO THIS DAY, I get emails from people asking me how best to write books about their real life (often traumatic) experiences.

That article, of the nearly 100 I've written for LitReactor, continues to generate the most emails from writers who want to write about their lives but don't know how to do it.

I try to respond to these emailers as best I can--some of their stories have just taken me completeley aback--I am NOT QUALIFIED to comment on whether or not you can write an expose on your ex without getting in legal trouble. I encourage these folks to decide which side of the line they really want to be. If the book is about real things--it's nonfiction, it's memoir, it's historical, it's a collection of essays, and please consult a lawyer if you think what you are going to publish will cause real trouble.

But if you have a story you'd like to tell but the details of the REAL WHOs and WHEREs are not that important, then extract the essence of the story and re-tell it with fictional details in place of the real ones. Some people who know you best may be able to tell where the real story came from, but by fictionalizing it, you make it your own story.

Some writers have ridden the line pretty successfully. Dave Eggers published a memoir in which he called out sections that he had made up or remembered poorly. And he later published a novel which was entirely based on a real person, but he labeled it fiction to allow some level of doubt lest the portrayal bring trouble to that real person. Dickens famously used his own life in his novels, and it worked to add verisimilitude to his work even though some people DURING HIS TIME questioned his fictionalized versions of real people. Blake Crouch lives in my hometown of Durango, Colorado and my husband SWEARS he must have met my dad and used some of his life story in a fiction book called Abandon which is set in a town very much like Durango. I'm SURE Mr. Crouch does not know my dad and did not use anything, and that it's all a coicidence, but it's fun to pretend. The point is that writers CAN and SHOULD use what they know to enhance their otherwise fictional stories, and that's actually quite normal and makes for relatable stories.

I mean, the GENIUS of The Terror is that is does take a real and very mysterious story and add in some incredible acts of fiction and speculation that cause you to wonder where the line between truth and lie really is. It forces you to consider, even when you know it's irrational, the possibility that the crew of The Terror maybe WERE chased by a ravenous Yeti. I mean, who are you to say they weren't? Ha!