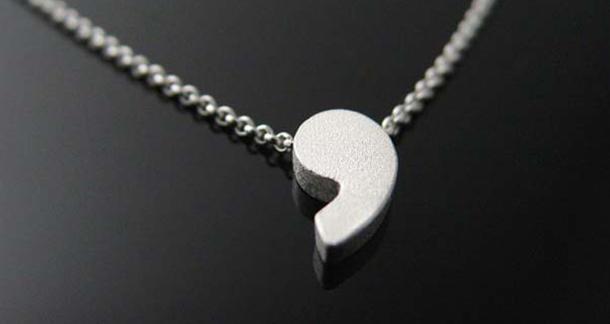 Hey, Jack, off that horse.

A completely legitimate imperative sentence. Forget to put your commas in the right place, however, and suddenly you’re writing a different story, for a different market altogether.

Look at the computer, genius.

This one works both ways, yes? If you’re talking to your roommate, who’s just asked you what time it is for the fiftieth time since lunch, and he’s sitting right there at the monitor, then “Look at the computer, genius” is something he’s pretty much asking for. 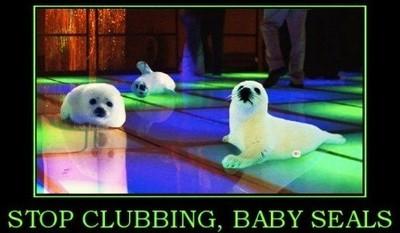 If you’re watching The Net, though, and it’s also 1995, then you might nudge whoever’s sitting beside you, and, without peeling your analog eyes from the screen, whisper a reverent “Look at the computer genius” before settling back into your warm puddle of awe.

Trick is, that one comma can give the readers context, can let them know if you’re talking to somebody or about them.

It makes all the difference.

All those almost-graduates with “Hi Mom” masking-taped to the top of their mortarboards? They’re not talking to their mothers, they’re telling everybody else what kind of mother they have. Which, if that’s the case, great, but at least spell “high” out, please. Otherwise, return to freshman year, don’t collect two hundred dollars.

And, sure, this is somewhat picky. It’s more prescriptive grammar than it is descriptive, and the objection to it usually takes one of two forms:

But, when I’m at a party and I call across to my friend Bob who just walked in, I don’t actually pause between “Hey” and “Bob.” I just say it all at once: “Hey Bob!” And aren’t we supposed to put commas where our natural breaths are in a sentence? Doesn’t that comma just become ornamentation, then, or, even worse, a sign that I’m kowtowing to obscure and vestigial rules of grammar, rules that the email and IM and texts are effectively, and thankfully, eroding away for us?

Okay, that’s a lot of objections altogether. And with the “Hey Bob” one, I agree: that pause there, it’s way hard to hear. But, what if your friend’s name is Yolinda, say? Then, without that trace of a space, without that hint of a breath, her name liaisons together, doesn’t it? “Heyolinda.” And now you’ve just got a completely new and unwieldy word, one she’s less likely to respond to, at least not proudly. And, what’s worse, if you put the pause back in, as most people will, then you’re applying different punctuation to the same constructions, which is to say your grammar’s become situational. Meaning suddenly your prose is flying without any guidelines, without any rules, and the reader might be thrilled for a moment, not knowing what to expect—two semi-colons back to back? one of those “?!?”-insults?—but you’ve also got them focused on the wrong thing, now: your punctuation. Instead of managing rhythm and syntax such that they can work in conjunction as a lens onto your content, where the real action is, your poor reader’s stopped at the level of the punctuation. And, if that happens, you’re already losing them, sorry. 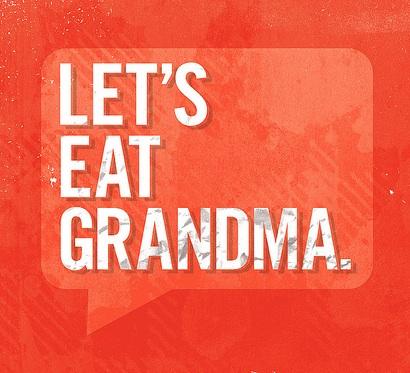 But, yes, in texts, in emails, the direct-address comma is slip-sliding away, no doubt. And I’m not going to try to insist that it be brought back. Those keys are so tiny, and all these texts and emails, they’re Mission: Impossible messages anyway: made to be burned. Just be careful not to port those tendencies, that (moral) laxness, that commitment to the temporary, back to your prose, which is probably not made to be burned. I’m not saying write for the ages each time out—far from it—but I am suggesting we each give our stories a touch more attention than the grocery list magneted to the refrigerator.

These texts and emails, too, all this fleeting non-prose we live inside every day, they do lead us directly into the second big objection to a strict allegiance to direct-address commas:

If the reader can understand it, isn’t that enough?

I don’t think so, no. Remember this? 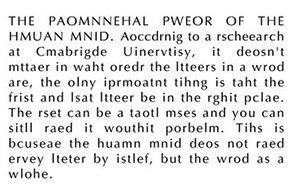 We understand it, and understand it even better than we initially think we’re going to. But you don’t want to read something like that, either. If somebody wrote a story with those kind of jumbled words, it’d be on par with those poems that have hidden acrostics in them, yes? At which point you’re a shuffle and skip away from the kids’ menu at Chili’s. I’m not saying that innovation’s bad, or that I want to freeze language in place. I just want to avoid confusion. I don’t want to jack off the horse, please. I’m hoping that’s a sentiment we all share.

I don’t want to jack off the horse, please. I’m hoping that’s a sentiment we all share.

And, talking innovation, I guess there’s a possible third objection to blindly adhering to the direct-address comma:

Fifty years ago Pynchon was using “sez” instead of “says,” wasn’t he? Isn’t this along those same lines? Shouldn’t I focus on the story, just let my copy-editors fix this kind of stuff if it’s so-ooo important to them?

I suspect you can get by like that, yeah. Supposing you’ve already got editors. Using punctuation wrong, though, man: good luck rising out of that slushpile. When editors consider stuff, they’re not looking for reasons to love this, they’re looking for reasons to stop reading, to move on to the next piece, with the idea that, once they weed out all the pretenders, all the wannabees, all the amateurs, then they can have the luxury of selecting from the few that remain, which are guaranteed to be clean, anyway, even if not quality. But we associate the two: cleanliness is a result of attention paid, while sloppiness suggests that the writer didn’t even take this seriously. Why should the editor? Why should anybody?

Another half-objection I get lobbed my way every once and again, it’s that we don’t comma “Dear John” up, do we? No. Of course not. Because we’re describing John, there; we’re probably asking him to do something for us, and part of our knee-jerk rhetoric is to remind him how dear he is to us, and hope he feels the same way. However, “dear” lost its sincerity about ten million iterations ago, so of course people vary it up. They say “Hey John,” they say “Hello John,” and so on. Just like with “Hi Mom,” though, if they’re asking for something, then they’re doing it in a weak, likely-to-fail way: by tossing the adjective “Hey” in front of his name, such that it now modifies him? By showing that they don’t respect him enough to use proper grammar? By feigning casual ignorance in hopes that John will take pity and grant their request?

And I guess the last objection, which I don’t even count as a serious objection, it’s this old one:

Come on, man. I just don’t want to use them for the “Hey Bob”-type stuff. For any big, real sentences, of course that comma will be there. It’s not like I’m stupid or anything.

It sounds tempting, doesn’t it? Let the small stuff slide. Like Steely Dan says, Throw back the little ones, pan fry the big ones. Except, I mean—can’t you hear Jeffrey Dahmer saying this, as a kid? “Come on. Seriously? It’s just some cats, some dogs. It's not like this is going to go anywhere or anything.”

Start thinking like this and pretty soon you’re murdering the English language, one comma at a time. Trying to occupy some grey middle ground is like trying to argue that you don’t really smoke, that’s just on the weekends, it doesn’t really count. But it does. It always does. If somebody cheats on just one paper in your class, then that person’s now a cheater, right? If you start allowing “Hey Bob” into your prose, then you're part of the problem. Letting that direct-address comma slide, it’s a gateway to some kind of grammarpocalypse, a new dark age of punctuation. In the big games of chutes and ladders, it’s a greased slide directly off the editor’s desk, into oblivion.

So the cookie-cake employee, after much glaring and no small amount of sighing, he retreats to the back to force some more icing through a tube, give me that comma I so need.

For a while now I’ve been tracking close shaves, border cases, places where this direct-address comma can be tricky. Here’s what I’ve got:

But this can’t be even close to comprehensive. It’s just what I’ve lucked onto, chanced to write down. I will start listing mine here as they keep coming up, though, so I don’t have to carry them from phone to phone. If you’ve got some, too, or find some, please, post them. There may be some perfect border-case still out there, which completely undoes my whole world, releasing us into some new dark ages, where stuff like this is scary instead of just embarrassing: 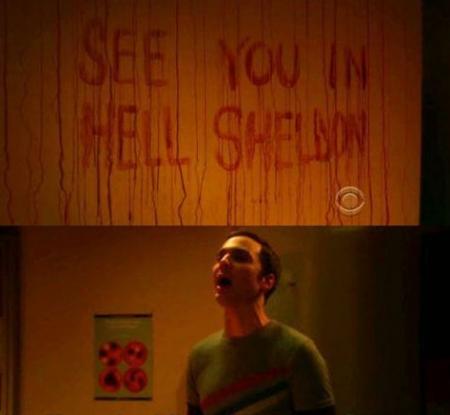 If this becomes the norm, then we’re all in hell, yes.

Preparing for Company: Writing 'The Least of My Scars'

Courtney from the Midwest is reading Monkey: A Journey to the West and a thousand college textbooks October 8, 2012 - 11:26am

This is one of my biggest pet peeves. Comma rules are not only one of the easiest things to learn, but also one of the most important. If an author refuses to take grammar seriously, they aren't taking writing seriously. It's like painting your masterpiece on a trash bag with make-up brushes -- the tools are half the battle.

Joshua Chaplinsky from New York is reading a lot more during the quarantine October 8, 2012 - 11:40am

I love the examples, especially the 'close shaves.' I love the way your mind works, Stephen.

Lafayette gets all the best lines (, hooker).

Direct-address commas, yeah, I think it's important to get those right. I do leave out certain other grammatically-mandated commas in my writing, though, if it's to set the rhythm of the voice, to not pause. But only where it doesn't result in confusion. I probably shouldn't mention Oxfords here (die-hard fan).

Neil Gaiman seems to use lots of commas. I love his writing.

My mum continues to address all my letters and e-mails with "Hi, Em," and that habit of hers has kept my brother and me doing the same.

Excellent essay. I see this mistake a lot in short story drafts. I might start responding with a link to this article!

I keep the "Let's eat grandma/Let's eat, grandma" on my door at work, so others know what to expect if they ask me to proofread letters for them. Still, higher-ranking (and higher-educated) co-workers hypercorrect my drafts, removing very necessary commas, and adding unnecessary ones.