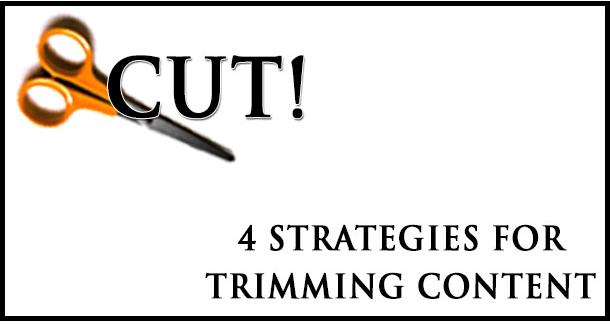 A deluge of unnecessary content or verbiage can destroy your work. When it's time to revise your over-written piece, how can you make cuts that avoid castrating it? Take it from a chronic over-writer: Making cuts isn't an easy process. However, there are some helpful techniques. Here are four strategies I use when revising my own work.

You can make more effective cuts when you make conscious declarations about your goals.

"All language is sermonic," or so says rhetorical philosopher Richard M. Weaver. In other words, communication is always aimed at convincing an audience of something.

In fiction, the author's "sermon" doesn't stop with fictional details. A female character described as having blue eyes, black hair, pale skin, a thin frame, and a tattoo of a raven on her left collar bone is not just telling an audience what the character looks like. These details become sermons on who a character Is.

Character descriptions show emotional, lifestyle, and social attributes (which the writer can then exploit or subvert). Setting descriptions serve as sermon for the emotional tone. Plot movements try to convince an audience to feel specific emotions and, more importantly, to keep reading.

While most of the goal-setting happens at a subconscious level, you can make more effective cuts when you make conscious declarations about your goals. Divide your work into segments and make a note of goals for each one. Once you've done so for the entire piece, decide if any of the sub-objectives are expendable. You can use your vital goals as reference points for deciding whether a given segment can be cut.

2) Set a strict word limit for each section

When you know you have a segment that's gone beyond a reasonable word count, set an exact limit on the number of words. Don't just say, "I want to cut a fair amount." Choose the total word count you'll allow for the segment.

When I set these limits for myself, I often fail to compress the story to the target size. However, that failure is deeply productive. Each paragraph, sentence, and word has been evaluated—and I've decided each is worth keeping despite the additional length.

Don't underestimate sentence-level revisions when working toward this goal. "Loose" sentences can be twice as long as their "tightened" counterparts.

3) Look to your beginning and ending

"Start as close to the end as possible."
-Kurt Vonnegut

The most commonly overwritten areas are introductions and conclusions. Do not start at the very beginning. As Kurt Vonnegut said, "Start as close to the end as possible."

One piece of common (and useful) advice is to cut the first paragraph entirely and see if the piece still works. You'd be surprised how often that first paragraph was about starting your writing engine and not about the story itself. Don't treat "cut the first paragraph" as a hard-and-fast rule; sometimes your opening paragraph starts at just the right point, while other pieces may need to have the first few paragraphs, pages, or even chapters slashed.

Conclusions present a similar problem. Ineffective writers often fail to communicate their point at all. As a result, writers coming through the ranks often overcompensate by tying each piece off with a tidy little bow. This isn't necessary. Trust your voice, trust your audience, and let the story's ideas stand without a dead-horse-beating conclusion.

The hardest time to cut a segment is when you're attached to it. It's easy to lose objectivity. While I could tell you to just kill those darlings anyway, sometimes your attachment is based on legitimate strengths found in the contested segment. The problem is that it's difficult to evaluate that when you've gotten attached.

Instead of bashing in the skulls of your beloved creations, try the route of reckless abandonment for a while. Cut and paste the in-question segment into a separate document. After you've given the piece a few days, come back and re-read the cut version. If the piece functions without the removed segment, keep the cut.

Cutting your work down to size can be mentally and, yeah, emotionally difficult. Cuts done too quickly or carelessly can rob your work of its potential power. However, a properly trimmed, tightened, and focused piece becomes exponentially more effective.

i've cut at least 13k words during the lifespan of my current ms, most recently 5k words in a single rewrite. and you know what? IT FEELS GOOD.

When I went through my first grammar edit I cut about six or seven thousand words just to add the same amount back and more in content.  This works for me as I've tightened up sentences and added meat to the story.  Best of both worlds.  I guess this was strategie number two hard at work.

@Ispieller: It does feel good. There's a psychic weight lifted when we cut our manuscripts. While I often feel scared about deciding on a cut, hitting "DELETE" is liberating.

@Leif: I've seen some discussion on this topic where people are arguing for larger or smaller "ideal" word counts. This approach seems to miss the point---while your comment seems to get it. It's not about a specific word count: It's about using each word well.

These are great tips. What you are saying makes so much sense to me. I'm going to keep thsee in mind as I go forward with my own work. Thanks for sharing!