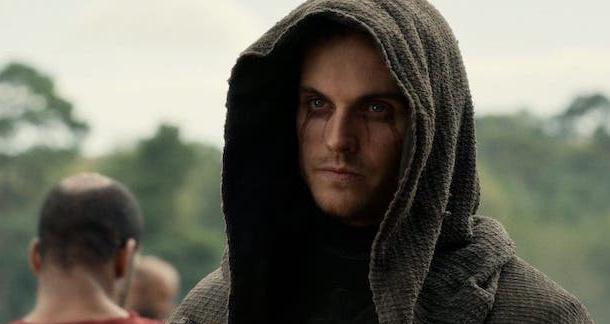 An outcast sorceress turned queen. A cutthroat fighting to regain his honor. Vikings. A drunk Merlin. Shadow Lords. Crusader monks. A nun who could probably give Pennywise nightmares––or maybe they’d be friends, I’m still not sure. The Netflix adaptation of Thomas Wheeler and Frank Miller’s novel Cursed is packed with a sprawling cast and a wide range of character arcs you’d expect in a book based on the Arthurian legends. But of them all, the Weeping Monk has one of the most compelling arcs of the first season, and is a prime example of how to craft a kickass redemption arc.

Two of the most common ways to redeem a character are through a “breaking point” moment or a “slow growth” arc. The slow growth redemption arc is exactly what it sounds like: A deeply flawed character is set upon a long, winding road to make up for all the atrocities they’ve committed, help to overcome the evil they once stood for, and ultimately earn the approval of their fellow heroes. But before your character can take a ride on redemption road, you first have to get them to the there.

How do you pave the way for them to reach the road in a believable way?

For a man with few lines and a whole lot of rage––seriously, every time the guy is on screen there’s a high chance someone’s gonna die––it’s hard to take your eyes off the Weeping Monk. But it's not just because of his slick fightings skills. Even though he’s menacing and clearly one of the most lethal weapons the Red Paladins have in their arsenal, he also has a moral code. It's small and slightly twisted, but it's there. We first see this after the Weeping Monk uses a young boy named Squirrel to lure Fey folk into a trap. Once he’s killed the group of Fey, the Weeping Monk lets Squirrel go. This small act of mercy is unexpected and contradicts our initial assumption that the Weeping Monk is a one-note, mindless assassin. Instead, this moment of contradiction shows us that this character has depth, internal conflicts, and ultimately the potential to change.

Moments of contradiction show us that a character has depth, internal conflicts, and ultimately the potential to change.

Though the Weeping Monk is a complicated character his backstory is pretty straightforward––though no less traumatic. As the show continues, we learn the reason he is able to sense the Fey folk is because he is Fey. The marks on his face show that he’s from the Ash people that––surprise, surprise––were slaughtered by the Red Paladins. He was taken in by Father Carden who has manipulated him into believing he is a demon and that the only way to save his soul is to serve the Red Paladins’ cause. While this quest for salvation isn’t an excuse for burning villages and butchering innocent people, this insight into the Weeping Monk’s backstory shows us why he is the way that he is, how deep his internal conflicts run, and that he’s already searching for a way to redeem himself. Again, we're shown that there is a desire for growth.

The Influence of Positive & Mirror Characters

But even though the Weeping Monk wants to save his soul, he can’t do it on his own. After years of being brainwashed and abused physically, mentally, and emotionally by Father Carden and the Red Paladins, he’s unable to step onto redemption road because he really doesn't know what "good" truly looks like––until he crosses paths with Gawaine and Squirrel.

Gawaine is basically the Captain America of Cursed, embodying everything we imagine a knight should be––as well as an example of the person the Weeping Monk could become. With the Fey being hunted down and on the brink of extinction, Gawaine is desperate to protect his people at all cost. So when he learns that the Weeping Monk is Fey, Gawaine immediately challenges the Monk’s justifications for serving the Red Paladins and in doing so makes him begin to believe being Father Carden's attack dog may not be the best way to save his soul. 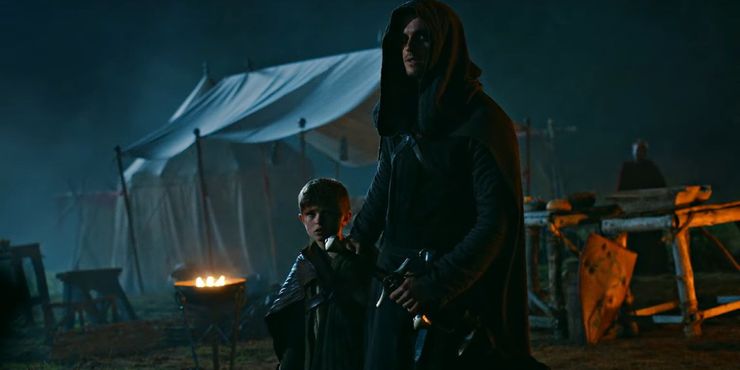 Of course, his chats with Gawaine may have fallen on deaf ears if it wasn’t for Squirrel, the young Fey orphan the Weeping Monk takes hostage and then lets go earlier in the season. Squirrel is innocent, courageous, and believes in the greater good despite all the horrors he’s witnessed over the course of his own journey. Squirrel reminds the Weeping Monk of himself before the Red Paladins twisted him beyond recognition. In other words, Squirrel’s story mirrors that of the Weeping Monk's. The difference is that the Weeping Monk is determined not to let any harm come to Squirrel because he doesn’t want him to die, or worse turned into the monster he has become. And it’s ultimately the Weeping Monk’s decision to free Squirrel and help him escape from the Red Paladins’ camp that sets him on the road to redemption.

But although the Weeping Monk may have saved Squirrel’s life and is ending the first installment of Wheeler and Miller’s retelling on a high note, he still has a long way to go before becoming the Fey's greatest warrior. He has a lot of bloodshed to answer for and years of trauma to work through. But with a clear backstory to build off, strong internal conflicts to wrestle with, and positive influences to pull from and live up to, the Weeping Monk’s character arc has the makings of a badass redemption story.

Buy Cursed at Bookshop or Amazon